.
This is a study in two parts. I wrote and posted the article first in 2018, but this week I found some more information, so I'm updating it.

'In 1885-7, the odd newspaper, mostly in America, starting referring to the successful British singer known as Irene Verona as ‘Mrs Fred Darrell’. Handsome Fred was just as successful, as a comic and comic opera tenor, as Irene was as a soubrette, but … well, I hadn’t sussed him as the marrying kind. He was a lad of the Bohemian clubs, mingling with some of the more unusual and eccentric male characters of the theatre world, but, well stranger things have happened. So I thought, since I was tied to my bed in an empty room, like Andromeda tied to the rock, by a nasty bout of food poisoning (my cooking!), I might as well tackle this question.

The first thing, of course, was to find out the parties’ real names. Got one, so let’s start with her.

Yes. Well there’s a bit of a tale there, I feel. Verona’s first job in the theatre was at the good old Polytechnic Institute, which mixed lectures and mechanical extravaganzas in a highly popular entertainment. But, normally, the Polytech only billed its lecturers and its few featured players, and the company didn’t get a mention. So we don’t know exactly when ‘Lotti Verona’ joined up. An American biographical note says 1873. I doubt it. Anyway, it must have been by 1877. Because, one day, a reviewer did mention some of the figurants by name, and there was ‘Willie Fuller’. I don’t think he figured very long, and I don’t think was an ‘actor’ very long, and I don’t think he was a husband very long. By the 1881 census, Verona is back home with mother, and calling herself by her maiden name. Off stage. On stage, she had become ‘Irene Verona’ and was well under way. 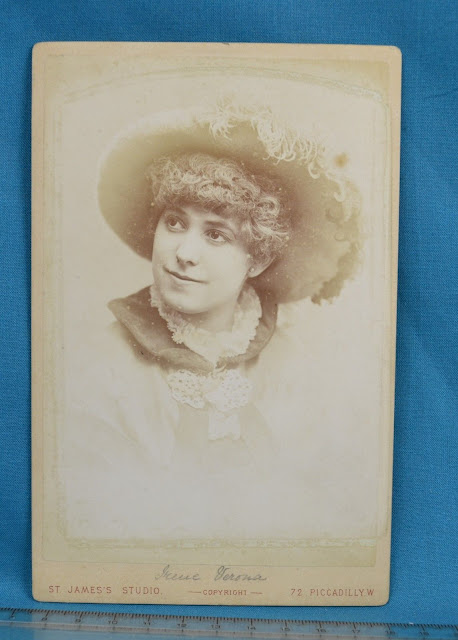 At Christmas 1879, she was cast as Ganem in The Forty Thieves at Charles Bernard’s Prince’s Theatre, Manchester. Mr Bernard ran good touring comic-opera companies, and Verona quickly moved into the part of soubrette Serpolette in Les Cloches de Corneville. She played her role in the provinces and then in London’s West End. At the Globe Theatre, 10 September 1881, the role of Grénicheux was taken up by a young tenor who had been playing it for the last three years in the provinces. Mr ‘Fred Darrell’. 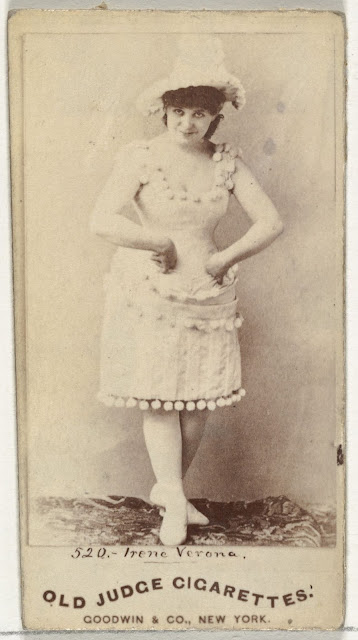 Both of the young people worked well over the next years. Fred played the title-role in Edward Solomon’s hit comic opera, Billee Taylor, all around Britain, and even into Europe. He featured in the tenor role of the London triumph Rip van Winkle, and went on the road with W J Hill in his favourite three-hander (music: Solomon), Crazed. The lady member of the little troupe was … Verona. She too, had been doing well. She had appeared as the soubrette, Beatrix, in Manola, toured and played panto for Bernard, starred at the Alhambra in The Golden Ring and Der Bettelstudent and even taken part in the variety musical The Bunch of Keys… 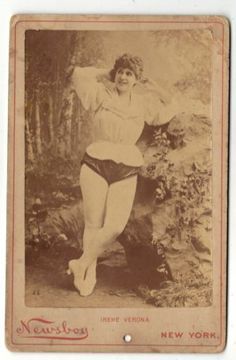 But then Fred got a particularly key job. The American soubrette, Lotta, visited Britain and appeared at the Opera Comique in Nitouche, and Fred was hired to play her lover, Fernand de Champlâtreux. Lotta clearly agreed with the press verdict (‘good looks and pleasant tenor’ ‘thoroughly satisfactory’) and swiftly hired him the accompany her back to America. America liked him a lot (The Little Detective, Musette etc): ‘He is one of those actors whom we will not, if possible, allow, to return to England’. Well. He did. And Verona too. He did stints for McCaull, Kate Claxton, Lydia Thompson, The Little Tycoon company, and then joined Verona who was starring in Edward Rice’s revival of Evangeline. In April 1887 the two departed for Britain together, ‘on board the Servia’, and this was when the marriage rumours started in earnest. They would soon have to stop. 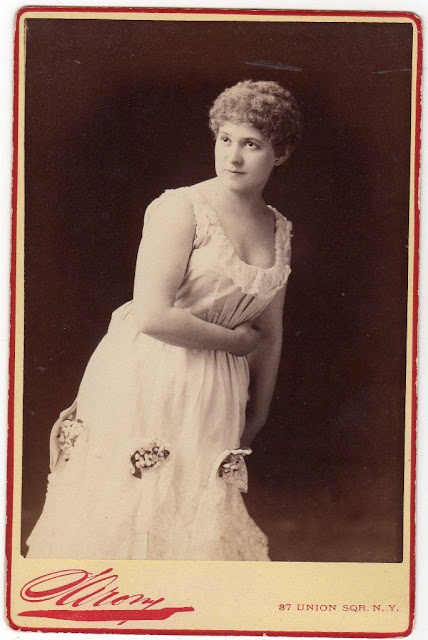 In England, Fred – who was becoming very much a musical-theatre wheeler-dealer -– brokered a production of Pepita with Verona starred, while he played in Fun on the Bristol, As in a Glass and Bridget O’Brien at the Opera-Comique, but then Mr Rice called, again, from Boston, and off they set. Verona played Finette in The Pearl of Pekin (Fleur de thé) in America and Canada, dragged out her Evangeline and The Corsair, Fred was seen in Vernona Jarbeau’s Starlight and in The Queen’s Mate (aka Pepita). 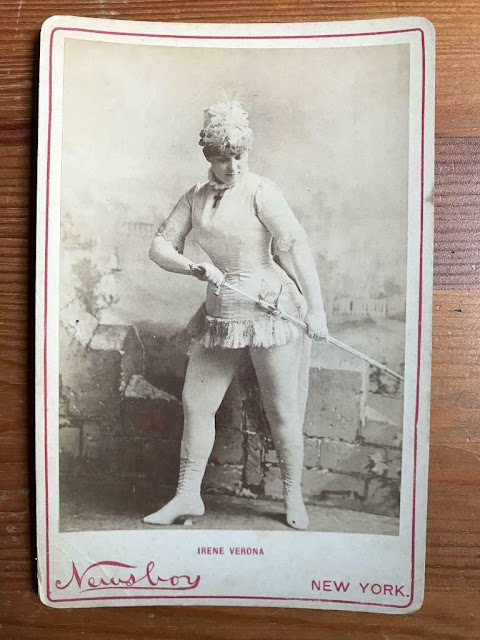 But Henry Leslie was staging Teddy Solomon’s vast panto, Cinderella, at Her Majesty’s Theatre, London. So back to England, again, for Verona to play the fairy, Quicksilver … Fred seems to have contented himself with occasional performances of good, old Crazed. And his agency firm at 22 Elm Tree Road. And, doubtless, a few nights out with Teddy and the boys.

Now, April 1891 is coming up. Census day. This will answer a few questions! But, no. In October 1890, Verona left, once more, for America, to play for the dreaded Mike Leavitt in the musical melodrama The Spider and the Fly. And I don't find her listed ...

But one thing I do find is a baby. If Fred and Verona had ever been an affair, they weren't now. The father of Verona's baby was an East India merchant's clerk from Muswell Hill, blessed with the resounding name of William Whitaker Hunt. I see him, in 1888, singing in a programme at Southsea's Clarence Pier. The baby, born 16 July 1891 in Manhattan, was even more resoundingly christened William Dudley Waldorf Hunt. It couldn't cope, and died 6 October 1892.

Verona stayed on in America, this time, for six years (Puritania, Arcadia, Aladdin II, Lost Stolen and Strayed etc), during which time Fred appears to my eyes, only in London (Pepita). And I can’t find either of them anywhere in 1890s censi. Just Verona’s 53 year-old mum, all alone … As for Mr Hunt, he doesn't seem to have hung around. In 1900-1, Verona is calling herself 'Mrs Hunt', and 'married', whether rightly or not. I think not. She even defiantly advertised in the trade press as 'Mrs W Whitaker Hunt'. But in 1900, Mr WWH had married elsewhere ...

Fred died suddenly, in London’s Charing Cross Hospital, 17 July 1898. Not quite 50. But Verona was just reaching the peak of her career: she fell into the world of the newly-fashionable Edwardesian musical-comedy, and over the next fifteen years she played the famous ‘Connie Ediss’ character roles in the most important musical-comedy touring companies, the length and breadth of Britain –The Circus Girl, the Runway Girl, The Silver Slipper, The Orchid, The Spring Chicken, The New Aladdin, The Quaker Girl, The Girl on the Film etc. In 1918, she was still touring, in the farce Oh! I say! Some career! Nearly half a century on the stage.

It seems Verona never remarried after splitting from wee Willie. Looking at the 1939 census of Brighton, I see she has gone back to being Mrs Verona Fuller. Nearly 80. Not really time to marry again at 80. But … where is the death record? The only one that I can find that fits is a Verona Pritchard, died aged 91 in 1951 and it's not she … So: Barham, Fuller, maybe Darrell?, Hunt, Fuller again? And that’s not counting Fred’s real name. Ah! Got her! Irene V Fuller, died Brighton aged 88, in the last months of 1947 ...

When leads me neatly into my next and last puzzle. Fred. No marriage, not ever, with all the help such a certificate brings. No 1891 census. But an 1881 one which is reasonably, I feel, reliable. In 1881, Fred was on tour with Billee Taylor at Cheltenham. We know it’s him, because he’s rooming with the company’s md. He says he is 30. OK, ish. And that he was born in Bristol. OK, ish. He’s at Teddy Solomon’s death bed as ‘Darrell’, and his own death cert (filled in by whom?) says his name was Frederick George Darrell. Well, the third unit isn’t true … but the first two? So, off to Gloucestershire. (What a nice thought!)

Frederick George born Bristol 1850. Only four of them. The only one I can make fit is Frederick George Date b 15 December 1849, Stapleton Road, Bristol … by Thomas Date out of Hester Chinn. In 1871 he’s in St Decumans, with an aglab uncle, being a cordwainer … and then seen no more. Under that name, at least. So is he the ‘Mr Darrell’ who turns up, the following year in amdrams in London? Well, Mr Darrell, recognizably, our Mr Darrell, is finally and openly visible as Leofric in the panto Lady Godiva at Sanger’s, at Christmas 1875, before he moves to the Folly Theatre (md: Edward Solomon) and the start of his long stint in Les Cloches de Corneville, then Billee Taylor … and away we go.

Well, I can’t provenly tell if Mr Darrell is Mr Date. I haven’t any alternative to offer. Yet. But I’ll take 100-1 against Mr Darrell or Date being the legal spouse of Miss Barham by any other name! De facto? Well, what would I know?

PS I see Mr WWH in the 1939 census too. With his wife. He says he is a stock exchange insurance clerk. Life clearly got less exciting once he gave up the stage ... He died the following year, leaving a son and the daughter. This son got clobbered with the name William Roderick Wulfstan Hunt (1910-2002).

Posted by GEROLSTEIN at 3:20 PM