The dreadful tale of a deserted soprano ...

This tale is told in my recent Victorian Vocalists, but I think it bears repeating on line ...

‘A sufficiently grim tragedy is reported among the consequences of the late dreadful weather. It relates to the death of Mme Hurleman (sic), the singer, with whose singing doubtless many readers were familiar. The career of a foreign singer or musician in London is after this fashion. She must begin by obtaining an introduction to one of those hostesses whom Mr Du Maurier has satirized under the name of Mrs Ponsonby de Tomkyns. ‘Mrs Ponsonby de Tomkyns’, in real life, is not necessarily a woman, much less a British subject. Indeed, some of the most advantageous of the De Tomkyns tribe are bachelors, two or three of them being of foreign extraction. The stock in trade of a Ponsonby de Tomkyns is a large and carefully assorted acquaintance, one half consisting of millionaires and grandees, the other half of beauties and geniuses. It is a rule of the De Tomkyns tribe never to remunerate any genius for anything genius may do in entertaining and amusing its fellow guests. The idea is, or rather was, that genius was sufficiently advantaged by being heard in the de Tomkyns drawing room by the rich or great, who might hire it for an entertainment of its own…. This system worked well for the genius in the old and prosperous days, as every gratuitous appearance at a de Tomkyns House meant two or three paying engagements at the houses of the undistinguished rich. But times have changed. Duchesses don’t give parties in these days of Agricultural Depression. They sponge on Mr Ponsonby de Tomkyns for a supper. Mme Hurlemann was well launched on the world above described, and was supposed by her patronesses to be getting on ‘very nicely’ but in fact she was starving and penniless. She never begged or borrowed, and no one knew of her trouble. She fought bravely and proudly on, and hoped things would mend. One bitter snowy Sunday night, some weeks since, she was invited to a particularly smart party. She had no money for a cab. She went as near the house as she could in ‘the Underground’ and walked the rest of the way through the snow. The party was full of angels, aristocrats, actors, ambassadors, artists, authors and Americans, with a civilised Home Ruler thrown in to give piquancy to the occasion. Mme Hurlemann’s singing was an immense triumph. Probably, she laid the foundation of a hundred pounds’ worth of engagements. She walked back to the train in the snow. During the night she awoke with congestion of the lungs. In a few days she was dead of her cold, aggravated by starvation. All she left was eight shillings – and a little girl of six years old …’

If the tale were told in a sob style, redolent of The Little Match Girl, Madame Hirlemann’s death was a fact. But who was she?

She arrived in Britain in 1884, and seems to have been first heard at the concerts staged at the Albert Hall in connection with the International Health Exhibition, alongside Henry Pope, Sydney Tower, Eleanor Farnol, D’Arcy Ferris and many unknown to fame. However, a few weeks later, the Albert Hall hosted the first British concert Parsifal. The leads were sung by Germans, but a curious little band of ladies was put together to sing the flower-maidens: Agnese Thorndike, Mrs Hutchinson, Marian Fenna, Beata Francis, Mrs Norman[-Stuart], Hilda Coward and Mme Hirlemann. It seemed more like a cast list for a society soiree than a Wagnerian concert.

On 4 December 1884, Mme Hirlemann went to Exeter to sing in Farley Sinkins’ concerts, and we were vouchsafed that she had ‘appeared with very great success at the Grand Opera House, Milan, and has just returned from a year in China and Japan’. Well, I don’t know about Milan, but the Orient was true. In 1880, the French paper La Justicemockingly reported that a poster in Saigon was advertising La Fille du régiment featuring Madame Hirlemann’s ‘premier prix du Conservatoire de Paris’. He was seemingly right to mock. Adeline may have been at the Conservatoire, but I can’t find her. However, The Straits Times pins M et Mme Hirlemann (‘a sweet and powerful voice’) in the east in November 1878. And Monsieur is ‘the pianist and composer’. Is this Michel-Théophile Hirlemann (b Wintzenheim 29 September 1855; d ?Paris 27 June 1927) composer of the opérette Mam’zelle Trompette? 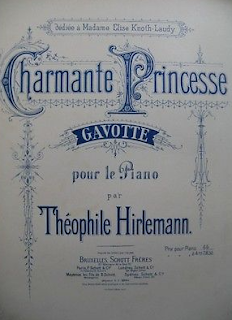 Through 1885, Mme Hirlemann was constantly to be heard at various fashionable homes, in the company of others of the frequenters of such concerts: George Power, Alexandra Ehrenberg, Mrs Hutchinson, Monari Rocca, Mathilde Zimeri, Carlotta Elliot and, above all, the king of the society dinner and concert circuit of the period, Isidore Cohen known as ‘de Lara’. I spot her at John Child’s concert chez Mr and Mrs Henry Lumley, at Mr F von Zastrow’s concert at Captain and Mrs Laing’s, at the Prince’s Hall for Mario Costa (‘Chanson de Barberine’ ‘exquisitely’, ‘Lontana’ ‘with so much fervour’) and various soirées artistiques with de Lara, at Donald de Vere Graham’s concert in the salon of the Howard Cockrells, or for Mlle Enstrom at the home of the tanning mogul, Foster Mortimore. She returned to the Albert Hall on the occasion of the International Inventions Exhibition ballad concerts, the to Prince’s Hall to sing with pianist Jenny Viard Louis (‘Ah perfido’), for Mrs Osborne Williams, Therese Castellan, Van Lennep, and Costa again (‘Lontana’, ‘Un organetto’), at Miss Luranah Aldridge’s matinee, for Clement Hoey Esq at the Victoria Hall, as well as mounting a couple of evenings of her own, at the Marlborough Rooms (Rode’s Air and Variations) and Brixton Hall.
And there were doubtless more, unreported evenings in private homes …

The Brixton concert is the last I can find. If the soiree described by our journalist was fact and not fiction, it was unreported.

The Ponsonby de Tomkyns circuit, George Power and Mr Cockrell at their head, staged a matinee for the benefit of the semi-orphaned child. Marie Tempest and Hope Temple sang, as, of course so did de Lara. But the following month there was another Benefit, put up by the amateurs of the Kendal Dramatic Club. I wonder what the connection was. De Lara, of course, supplied songs between the amateur plays.

Well, I’ve tried to find who Mme Hirlemann actually was. That piano-playing Monsieur out east … Yes! I was right, it’s Théophile, all right! Here is the proof, dredged from the Orient, 1879-1880. ‘We had with us Mme Th Hirlemann, a French coloratura singer of considerable talent, who used to sing arias from grand operas during our intermissions.  At hearing her, on the first night, make her usual trills, cadences and chromatic scales, the Japanese audience was convulsed with laughter, and considered her musical efforts the height of comedy. The lady in question felt herself highly insulted.  It was with the greatest difficulty that Mme Hirlemann could be persuaded to go on any more, after our opening night, as the same hilarity would be shown by the audience every night.’

So she was the wife of the Alsatian pianist and, later, rising salon songwriter. Who seemingly had abandoned her and their (?) child. I reckon so. Now I just need a marriage or birth register … 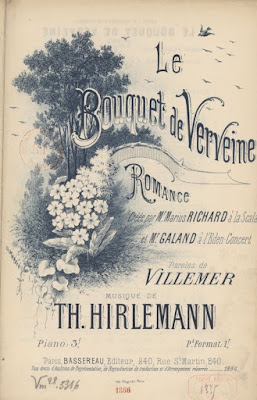 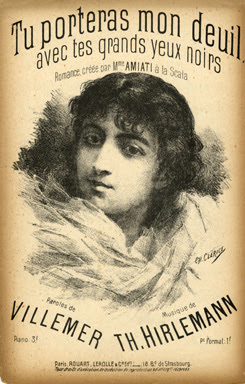 Posted by GEROLSTEIN at 7:25 PM