.
Some curious, or just plain nice illustrations which I've culled from the www which I'm storing here before clearing my desktop... 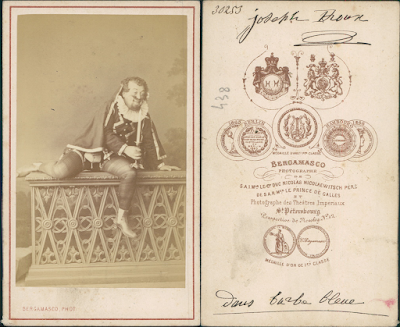 Who is this funny fellow? Joseph Proux? Preux? Prown? Photographed at Saint-Petersbourg in Barbe-bleue? I have a feeling that it might not be the Meilhac-Halévy-Offenbach Barbe-Bleue, but rather the féerie spectacular which was popular in the 19th century. 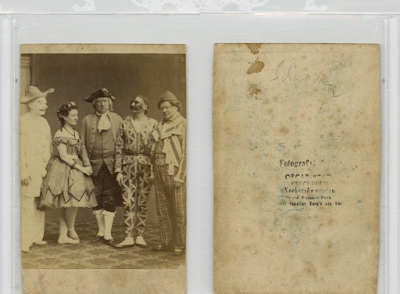 Date? 1860s? Looks like a German harlequinade group on tour. Alas on the verso they have only scribbled SCHWEDIN and a rather cheap rubber stamp of the photographer in Stockholm. 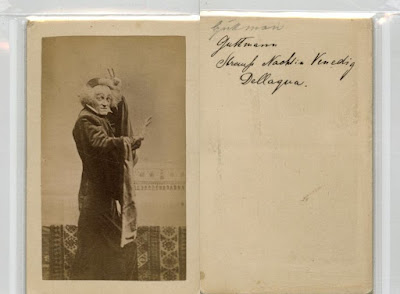 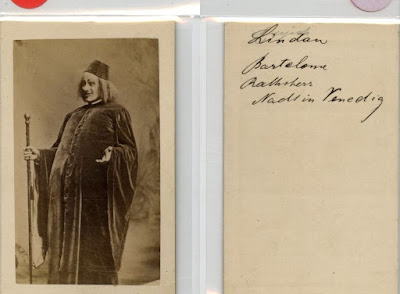 This pair clearly belong together. EINE NACHT IN VENEDIG. But where. Got it. Theater an der Wien. 1883. Arthur Guttmann as Bartolomeo Delacqua and Carl Lindau as Stefano Barbaruccio. What a pity the whole set isn't there. But the inscriber didn't seem to really know what he was doing. It looks as if 'Lindau' was originally inscribed with the name of the third of the three comic Venetian senators: Franz Eppich. Someone please pop into the Vienna Theatermuseum and check out the likenesses? 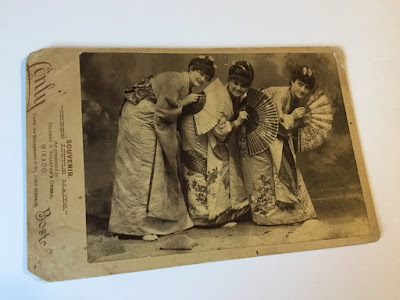 Not much problem as to what this is. Gilbert and Sullivan's 'three little maids' (no matter how large and matronly they might be) were photographed in this pose across the world. This one is labelled as being from the John Stetson comic opera factory. David Stone tells me that the Yum Yum (centre) is the tiny Ida Mülle. So it would be 1886. They played at the Hollis Street Theatre in February ... so maybe one of the other 'maids' is Agnes Stone .. G&S experts, please ... 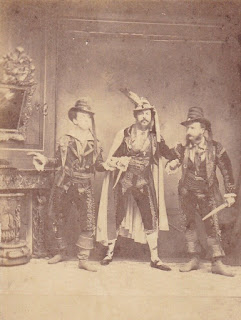 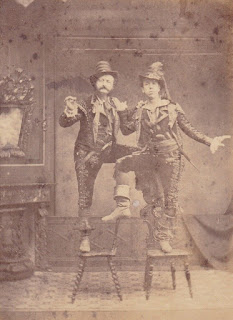 These pictures have been sourced in Slovakia, and the owner has labelled them just 'Italy'?. Unless there is something on the back to support 'Italy', I would guess that they are much more likely to be French or English. Because I reckon they are photos of a production of L'Auberge des Adrets, the hit French comic melodrama, played all over the world as The Roadside Inn, Robert Macaire or, musicalised, as Erminie. Macaire and Strop the comical thieves and the captured aristocratic bridegroom they impersonate ... ideas, anyone? 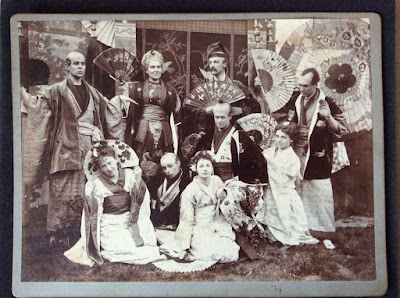 Here we have another Mikado, English, rather later, and assuredly amateur. 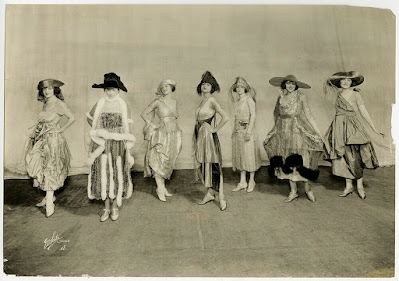 1920. Selwyn Theatre, New York. A 'musicgirl' comedy, which with Harbach, Mandel and the young Oscar Hammerstein as writers deserved a rather less coy title that Tickle Me. There were seventeen chorines (plus eight 'boys') of whom I imagine these are seven of them showing off their Charles Le Maire frocks. 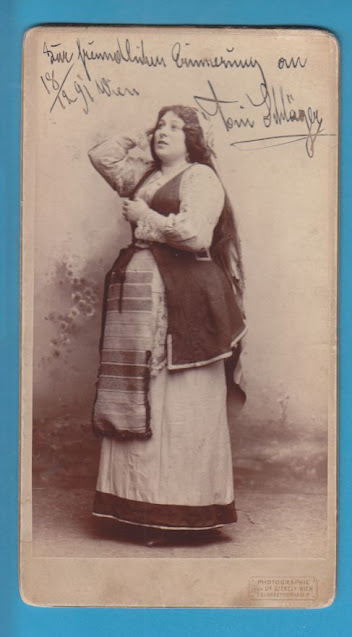 Antonie Schläger (1859-1910) as what may be Santuzza at the Vienna Hofoper. Well, it certainly isn't Aida, Brünnhilde, Desdemona .. 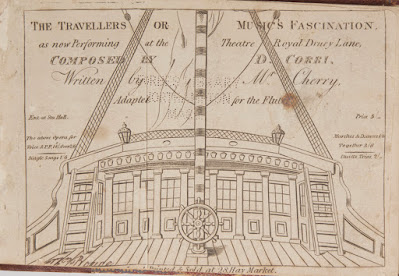 I think I've posted this before, but it came up again today. 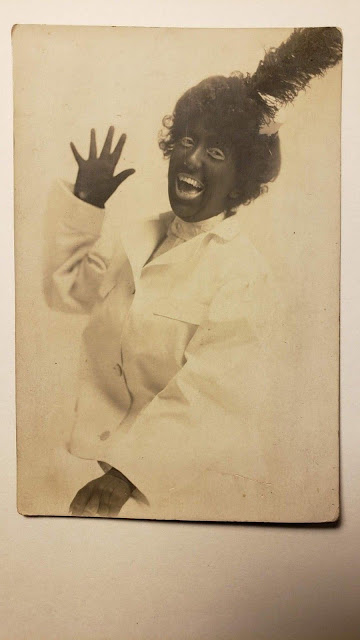 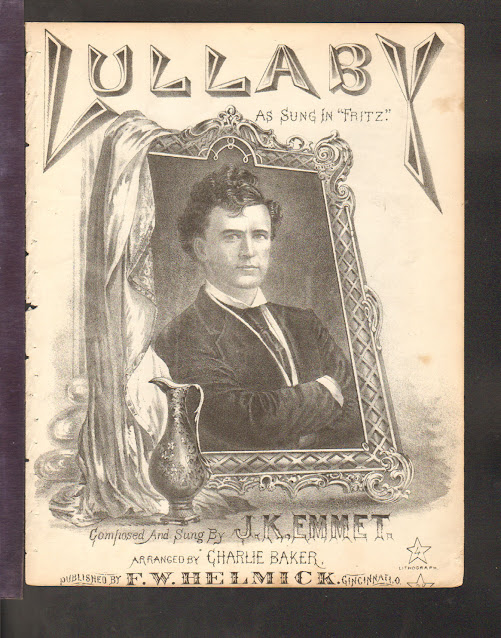 Not rare, but charming. Fritz's famous lullaby (Fritz, our Cousin German), which like 'Ah sweet mystery of life' in libretti since the ark, leads the long lost child to his sought ones 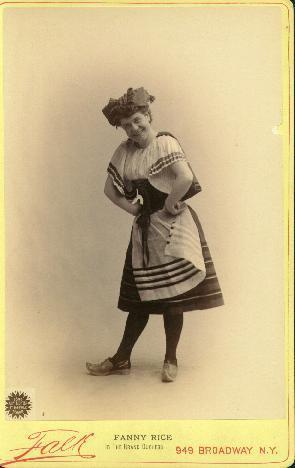 I just liked this cute picture of American star soubrette, Fanny Rice. She started her career in c1882, touring in The Gondoliers (Fiametta) and Patience (Ella), went on to play in comic opera with William Carleton, played Javotte in Erminie in Wanda to the Grand-Duchess of Lillian Russell, and spent some seasons with Rudolph Aronson at the Casino, before going out as a 'star' in farce comedy. Fanny remained active on stage and screen until the 1920s. 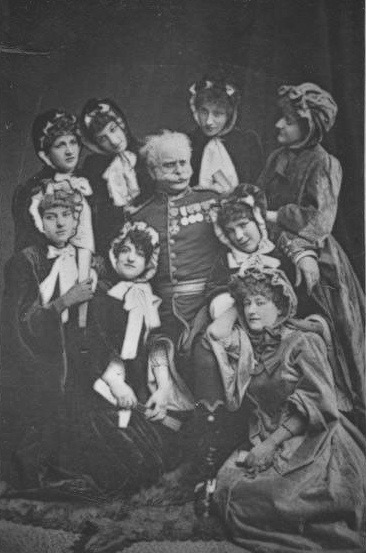 'We are the General's eight fair daughters'. In a palpable burlesque or imitation of the Major-General Stanley of The Pirates of Penzance and several other popular shows, James Mortimer bundled together the conventional book for Polly (1884). Edward Solomon's score and Lillian Russell in the title-role kept it afloat awhile ... and this photo survived. 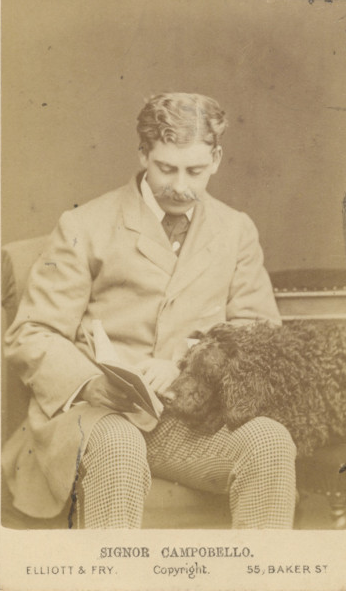 Him. Baron Harry Archibald Campbell San Martino McLean Martin by any other name. I collect photos of him. So that one day -- ONE DAY -- Betsy Miller and I may explode the morass of lies and impersonations and false names surrounding this man ... 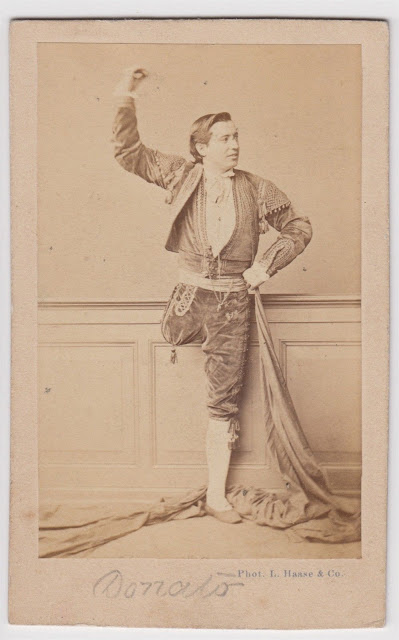 Donato, the more-than-briefly-famous one-legged dancer. Donato (whatever his real name may have been) first surfaces to my eyes in 1864 at Vienna's Josefstädtertheater. So don't believe all the pieces you read about his being at Drury Lane in the fifties, or even of being a Spanish matador whose leg was gored off by a bull. The Garibaldian war seems a much more likely leg-severing place, if severed he indeed was, and of course Donato was the name of one of its 'heroes'. Among the many and varied tales spun about him, he is said to have been pre-named Juliano then Manuel, a member of the San Carlo ballet (before losing the leg) and a dancer in a tavern in Lyon (without it), and to have have danced  at the Marseille Alcazar, in the southern part of France and in Africa, some years before his Vienna 'discovery'. The reports of the time do not make it quite clear, but I think that he -- who danced gracefully, not comically -- wore a wooden leg ... which reminds me of a Swedish comedienne of more recent times who danced the dying swan with a wooden leg. 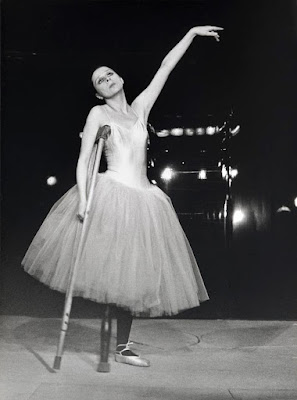 A long piece about 'Donato' in the Vienna press of 1866 has him as the son of a Count and a lady-in-waiting, as being more than one person (consecutively or simultaneously), as having two perfectly sound legs .. but at the height of the Donato-Epidemie in 1864 the press was already showing scepticism of the 'histories' of the various Donati ... 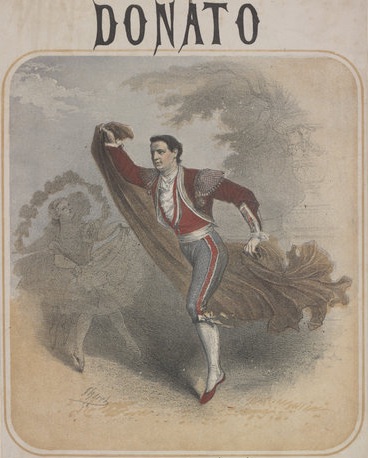 Anyway, the Vienna one proceeded to Kroll's Berlin, Brussels et al, as more and more other folk began imitating his act, he with his black servant, Marcellino, hied him to London and Covent Garden for the 1864 pantomime. I havent followed him up, but someone calling himself Donato was still performing in the Antipodes in the early 1870s. 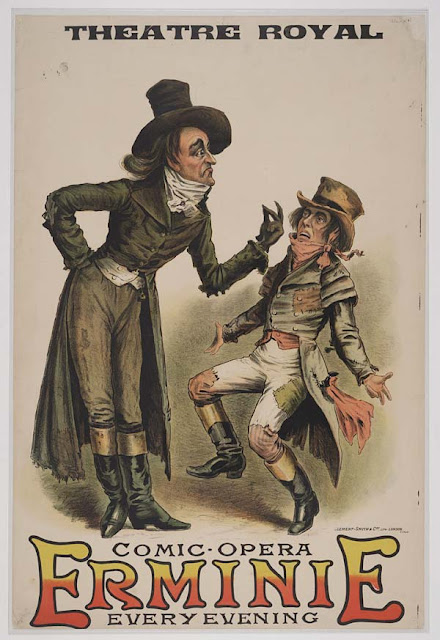 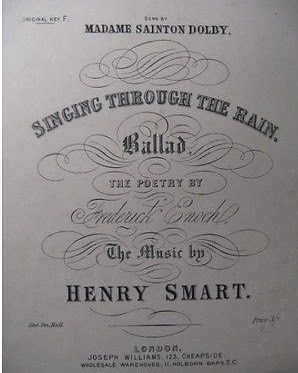 Imagine the voice of Charlotte Sainton-Dolby lending itself to 'I'm si....nging in the Rain".... 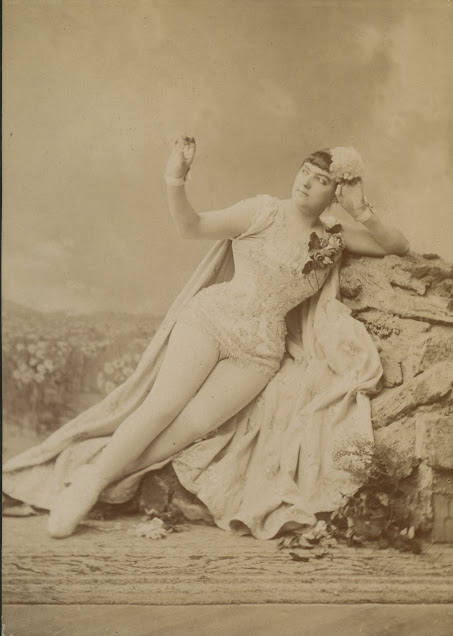 This is Leona Dare. Acrobat, dancer, body, otherwise Susan Adeline Stewart (Mrs 'Zoe' Hall) ... who has been mixed up, over the years, with various other gymnasts, male and female ... I think she was probably female? 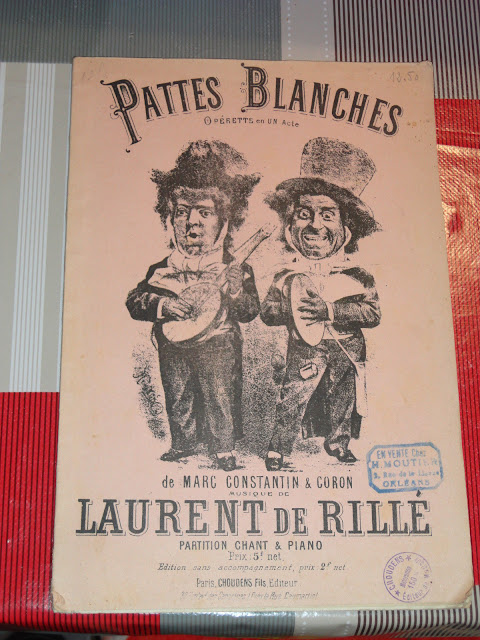 Why didn't I put Mons Laurent de Rillé in my Encyclopaedia? This looks like fun ... Les Pattes Blanches, produced at the Bouffes-Parisiens 20 May 1873 (not, Wikipedia, 1877) as part of a spectacle-coupé with, variously, Lecocq's Le Testament de M Crac (starring Debreux), Le Mouton enragé, Le Grelot (starring Anna Judic and Peschard) et al. Edouard Georges played Papa Loulou and Potel was Petit-Coco. The bill got the theatre closed down, but it was not the fault of this decidedly popular two-hander. It was repeated as an afterpiece to the saucy hit La Timbale d'argent, and played next season with Le Bouton perdu, Mariée depuis midi et al, and Desmonts replacing Potel as Coco. Its music was described as 'la brillante partition', the text as 'désopilante', and it remained in the repertoire for many years to come, being still played on stage and radio in the 1920s and 1930s.
Alas, I haven't the script, but it is evidently a black-face comedy sketch in the line of Les Deux Aveugles, which one of the reviews summarised as 'the adventures on two Europeans caught up in a negro revolution, giving birth to a thousand hilarious bouffoneries'. Its particularly attractive score ('une musique fort gaie et fort lestement trouvée, toute composée de bamboulas et boléros comiques..'), from which a waltz-melody found its way enduringly into the 'charts' of the time.
Posted by GEROLSTEIN at 3:56 PM