A photo with a high and mighty story ...

I was wandering through ebay yesterday, scouting out 19thcentury French ballerinas photographed by Disderi of Paris, and I came upon this rather elegant lady. Mrs Goodlake otherwise Miss Curwen. Curwen, ah! Memories of childhood piano music! Well, I was a bit fagged with day three of pointe shoes and gauze, so I thought I’d take time out to discover why a nice ordinary English lass was getting photographed in Paris. 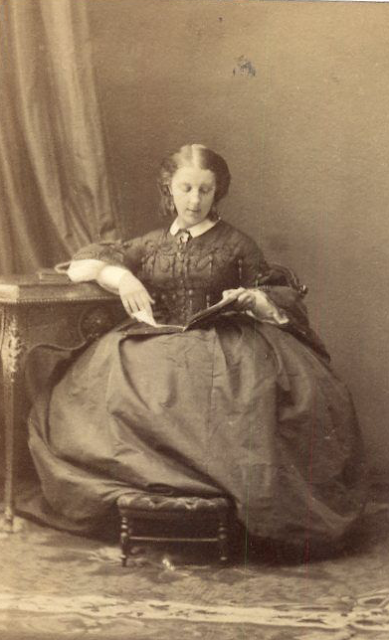 Well, I quickly discovered that she wan’t officially English, and she was far from ordinary. First step, I hied me to the Free BMD site, which informed me that Miss Margaret Jane Curwen married Gerald Littlehales Goodlake in 1870 (5 November). Well he shouldn’t be hard to track down with a name like that! And he wasn’t. And he was very far from ‘ordinary’. He won the VC, to start with. Son of Thomas Mills Goodlake, ‘from the well-known Letcombe Regis family’, of Wadley House, Faringdon.

Findagrave rendered up a photo of Gerald’s grave, and of him. And a neat biographical sketch by William Bjornstad:

British Army Lieutenant General, Crimean War Victoria Cross Recipient. He received the award for his actions at Inkerman, Crimea (now part of the Russian Federation) on October 28, 1854 as a brevet major in the Coldstream Guards of the British Army. Born at Wadley, in Faringdon, Oxfordshire, England, he was commissioned in June 1850 as a lieutenant in the 21st Regiment of Foot of the British Army and the following year he transitioned into the Coldstream Guards. While serving in the Crimean War, he was assigned to the 1st Battalion of the Coldstream Guards and participated in various engagements, including the Battles of Alma, Inkerman, Balaclava, and Sevastopol. He later achieved the rank of lieutenant general and died in Denham, Buckinghamshire, England at the age of 57. In addition to the Victoria Cross, he received the French Legion of Honor and the Ottoman Empire Order of the Medjidie, among other military awards. His Victoria Cross citation reads: "On 28 October 1854 at Inkerman, Crimea, Major Goodlake was in command of a party of sharpshooters which held Windmill Ravine against a much larger force of the enemy, killing 38 (including an officer) and taking three prisoners. He also showed conspicuous gallantry on a later occasion when his sharpshooters surprised a picquet and seized the knapsacks and rifles of the enemy." His Victoria Cross is on display at The Guards Regimental Headquarters at Wellington Barracks, London, England. His letters to home while serving during the Crimean War were compiled in a book by Michael Springman entitled "Sharpshooter in the Crimea: The Letters of Captain Gerald Goodlake V.C." (2005). 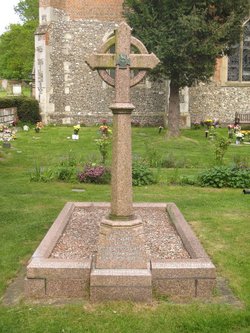 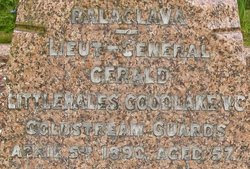 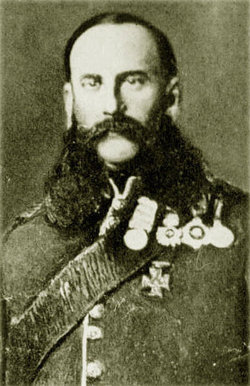 And gracious, he has a wikipedia entry! Mother was the daughter of a baronet, so they’re all in Debrett. I could have guessed. Doesn’t mention his wife. And yet, I was to find, Margaret’s lineage was just as impressive as her husband’s. If not more so.

Margaret is buried in the same grave as Gerald. 34 years later. But findagrave was a bit iffy on her details, and they didn’t have a photo, so I posted this one. And set out to find more about her. That wasn’t hard either! 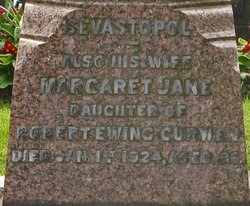 Margaret was one of THE Curwens. The Curwens of Workington Hall, Cumbria. Lords of the Manor and all it surveyed for many centuries. The Curwens ran rather dry in the C18th and the sole heiress to the manor was like to lose the famed name in marriage. But, in a reversal of the usual process, when Isabella Curwen married John Christian, he took her name and armaments and became the ‘head of a family with which few of England’s nobility could compare, either for antiquity of lineage or extent of inheritance’. The Curwens ruled benignly over their lands and tenants – some splendid tales emerge from the journals of the time: a tale of John ‘the celebrated agriculturist’ paying his workers in food and clothing rather than cash, or in famine year, diverting the potatoes usually steamed and destined to feed his horses, to the villagers – and the marriage was fruitful in children. Their second son, William (b 1789; d 30 April 1822), was designed to the church, and became rector of Harrington, and before his premature death wed Margaret Ewing (d 14 May 1871) and gave birth to Robert Ewing Curwen (1816-1854). Which brings us to our Margaret. Robert was her father.

When she was baptised 1 November 1837 at Ketteringham, Norfolk, her father’s ‘abode’ was listed as Kirkcudbrightshire, Scotland. And in the 1881 census she says she was born in Glen Kens. So I guess that makes her officially Scots. Robert Curwen (‘sometime of Dallas Lodge, Forres’) evidently spent much time in Scotland, but it was much time of a little time. He died at Aviemore, Inverness-shire aged just 38 in 1854. 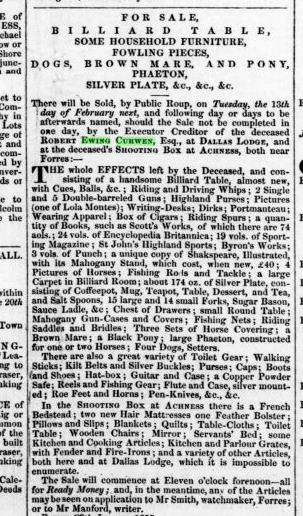 His extremely wealthy and extremely social widow headed south, daughter in tow, and the following year they were presented at court by Lady Cranworth. Margaret was seen dancing in the Quadrilles of the endless balls of the aristocracy (the participants in which were ruthlessly listed in the press), and took part in their amateur dramatics, Mother hosted balls, soirées musicales and concerts at her home at 42 Grosvenor Place, and the pair were seen eating and dancing everywhere in town and country, not to mention the ‘spots’ of France, in the houses of royalty and the titled, over the next fifteen years. Until Margaret married. So I guess it was during those years that the photo was taken. The inscription seems to have been an afterthought. 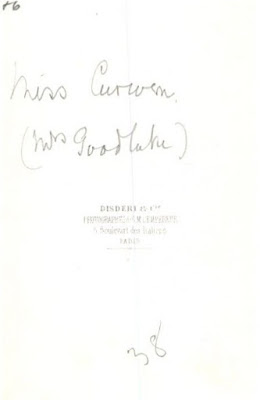 Margaret, with her husband, continue to appear in the lists of those present at the same royal, military, musical and aristocrasocial gathering as before. He is aide de camp to the Queen. 6 January 1886, Mary Ann Curwen died at Cecil House, Brighton. She left a vast 172,000 pounds to Margaret, entailed to her eventual children (it was fairly obvious by now, at nearly 50, that she wasn’t going to have any) or to a mass of hospitals, topped by St George’s Hospital. I wonder if the Ewing Ward is still there. 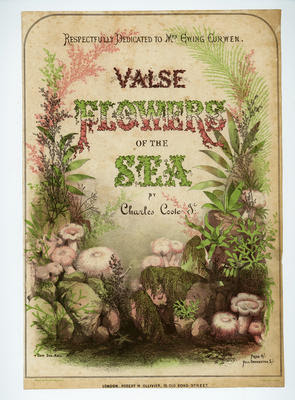 Just four years later, the Colonel died, at their longtime home, The Fishery Mansion, Denham, Uxbridge. But Margaret lived on, nearly a quarter of a century .. I see her at Denham in 1891 with a butler, two maids, a laundrymaid, a manservant ..  cottages for the estate manger, gardener, gamekeepers. In 1911 she is at her other home, 36 Chester Square, with just eight servants … She died at her Buckinghamshire home 1 January 1924 and her will was executed by a spinster neighbour in Chester Square.

Which leads me to the single oddity in this tale of the little lady in the photograph. In her marriage announcement, she firmly says ‘only child of Robert Ewing Curwen’. And mother leaves her all her 'millions'. But the amateur genealogists would have it otherwise. They credit Robert with a second child, a son bearing his father’s name. And the said Robert jr says on his wedcert that he is the son of REC sr. Now, this REC is a very respectable man. The doyen of the Royal and Ancient Golf Club, a justice of the peace, plenty of wealth, plenty of servants … he died at the age of 93, in 1934 leaving a bundle of children and money. Odd.

Posted by GEROLSTEIN at 9:09 PM