.
‘Une danseuse à l’Opéra’. It was a phrase which, under the brilliance of the French Second Empire had a particular flavour. Oh, it had had that same flavour for a century and more, before the days of Napoléon, and it continued on in its ways until the high-days fashions in France faded away into a mass of bourgeois morals … but the Second Empire ... ah! The Second Empire … with its very particular code of living... man and mistress!

A danseuse à l’Opéra was a prize. A status symbol. Because these were the days when any gentleman, royal, rich or striving to be either or both, kept a 'mistress'. And by ‘kept’, I mean kept in the ostentatious height of fashion. Diamonds, carriages, and apartment in town, a house in the country. And, although a selection of actresses and singers – from Blanche d’Antigny and Marie Cico, from Esther Duparc to Hortense Schneider and the others whose details and addresses could be found in the ‘limited edition’ of volumes such Les Jolies Femmes de Paris---, were among the showier and best-known of these dames entretenues, the ladies of the Opéra ballet were the basic catch a man of position or ambition generally strove for. And he wore his mistress, once she had been won, on his arm like a stripe of rank. Singers? Bof! As one commentator of the time said, the singers go home to their own beds, the dancers go out to supper (etc).
I sha’n’t write an essay on the merry highlife of the French 1850s and 1860s. That has been done hundreds of times before. Factually and of course fictionally. You meet Pouponne or Loulou ‘danseuse à l’Opéra’ in the mythical ‘news’ or stories of the time, the mistress of so-and-so: the only trouble is Pouponne and Loulou never turn up in the factual cast lists of the era. Well, there wouldn’t be room for them. For there were only seventy odd members of the ballet at the Opéra at one given time, and I’m going to list a lot of them. At the top of the heap were the danseuses étoiles, the Carlotta Grisi, Taglioni, Cerrito, Rosati, Ferraris, Couqui, and so forth.

They stayed, usually, for a year or two and moved on to further triumphs in Vienna, Milan or Russia. The real Paris Opéra troupe came at the next level: the grands sujets, the petits sujets, the sixteen coryphées, and the four quadrilles of eight which, all together, made up the corps de ballet. Some of these lasses danced at the Opéra for a decade, some as much as two decades, some even much more. Some -- such as Dephine Marquet or Fanny Génat -- moved on, after a while, to play in the dramatic or comic theatre, one even ventured to the Bouffes-Parisiens to sing for Offenbach, but, although little corps de ballet girls came and went, the backbone of the troupe, the sujets and even the coryphées, was solid. And, largely, solidly ‘entretenue’.


The word ‘courtisane’ doesn’t strictly and everywhere apply. Certainly, there were those ladies of the ballet who shared their favours widely, some very acknowledgly virtual prostitutes, but the aim of a baller girl, high or low, was to hook a nice wealthy young baron (they were safer than financiers) … and keep him. And many did. But there were some others – famously, Anna Rust, who was so ‘sage’ even the stagehands were polite in her presence – who were staunchly not of the demi-monde. I guess this is she? 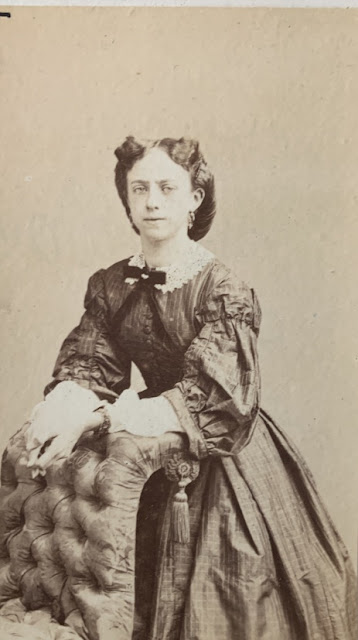 Some of the Opéra danseuses did marry, much to the disgust of supremo, Nestor Roqueplan, who hissed ‘une danseuse mariée sent mauvaise’. It was reducing the stock of 'available' ladies who drew the men of the town to his theatre. Well, he did his bit for the cause. His own mistress was of the company, as was that of Bagier of the Italiens … And, pace Mons Roqueplan, there were plenty of those demoiselles who were well and truly out for a good and lucrative time, such as the simple Clara Pillevoix, whose first question on meeting a new gentleman was ‘Monsieur est du Jockeyclub?’. If he weren’t, Clara wasn’t interested. 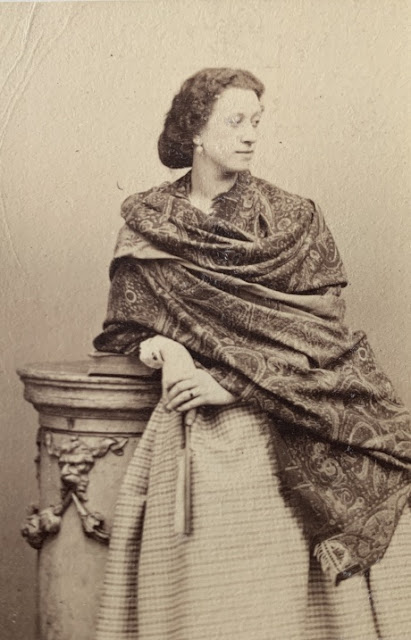 There is a heap of books of memoirs written by gentlemen who inhabited this glittering world. Titles such as Ces Demoiselles de l’Opéra, Les Théâtres en robe de chamber, Le Livre des Courtisanes, Le demi-monde sur le second empire or even the Tétoniana of one Gustave Witkowski, which seems to be wholly on the subject of the girls’ breasts. They are mostly uninformative as far as facts are concerned, full of brief physical descriptions (mainly hair and figure!) and dubious anecdotes and curiously misspelled names, but they do give a ‘feel’ of the period, where being a ‘dirty old man’ was regarded as far from ‘dirty’. As long as the diamonds were clean.

But, what am I doing in this world. For decades, I’ve skipped through the doings at the Paris Opéra, studiously ignoring the dance and dancers, in favour of the singers … well, I just had an urge to put faces to some of these names. And facts. I’ve spent three days at it, and I will say that, thanks to such resources as the Musée Carnavalet and the collection of Paul Frecker, as well as several ballet-devoted sites, I’ve been quite successful at the first. The second has been much, much more difficult. The dancers were usually listed just under their surnames or stage names, frequently misspelt … but, putting aside the stars, here I go. Goodness, where do I start?

Right. Cast list from the opera L’Enfant prodigue, produced at the Opéra 6 December 1850. Huge list of dancers. The Belgian Adeline Plunkett (1824-1910) is cast in the featured role of the Egyptian dancer, Lia, and does a pas de trois with Célestine Emarot and Elisabeth Robert in Act II. Mlles Carabin and Adele Villiers are a couple of angels. There are 12 ‘Jewesses’ and 35 participants in the Apothéose of the last act, including the Mlles Nathan, Legrain, Caroline Pierron, Louise and Mathilde Marquet, Astory, Léontine Rousseau, Cassegrain, Nane Danfeld, Ynemer, Lebaigle, Louise Vibon, Révolte, Josephine Gaujelin, Alexandrine Simon, Maria and Zoe Jourdain, Henriette Mathé, Domange, Boyer, De Haspe, the sisters Maupérin, the sisters Laurent, Maria Savel … all of whom will turn up on plenty of other programmes, before and after …
And that cast doesn’t even show the full force of the company. I see in the Cahier for the previous year Mlles Carlotta Grisi, Fanny Cerrito, Adeline Plunkett, Sophie Fuoco, followed by Elisabeth Robert, Célestine Emarot, Mme Fuchs-Taglioni, Mme Théodore, Caroline Lasciat, Aline Dorsé and the Mesdames Barré-Lointier*, Delacquit, James*, Franck*, Rousseau, Paulus*, Gybal*, Marquet, Gougibus*, Astory … phew! By 1851, Mlles Priora, Lacoste, Caroline Pierron, Constance Quéniaux and Mathilde Marquet have risen in the ranks and the asterisked ladies are gone. Well, some of those on the list don’t go on, or far on, into the new Empire and the age of the photograph, but three of these were to become memorable ‘pillars’ of the company, so I think it is with those three that I will start my episode one. With ‘Mademoiselle Caroline’, ‘Mademoiselle Aline’ and Mademoiselle Louise dit Marquet. 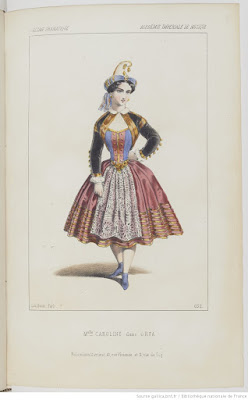 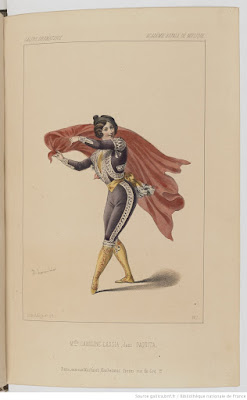 ‘Mademoiselle Caroline’ was [Marie] Caroline Lasciat (var: Lassia). She had already risen, in the unphotographable 1840s, to being a ‘grande sujet’, dancing solos and pas de deux, mostly in support of a star., but occasionally toute seule. In 1852, she was referred to by a journalist as a ‘divinité secondaire’ of the troupe (but so were Robert, Taglioni and Marquet!), in 1857 Charles Biogne classed her only behind Rosati and Chouqui, in a peloton including Legrain, Nathan, Baretta et al. Which was not too bad: level two out of eight? So Mademoiselle Caroline was not a danseuse étoile, but she was an excellent performer, worthy of a featured spot in new ballets such as Le Corsaire, and that for nearly two decades. But there was more to come. Caroline married, around 1850, the Opéra viola player, Italian Dominique Pierre Paul Venet(t)ozza, and as ‘Madame Dominique’, after her performing days were done, became ballet-mistress at the Opéra and an internationally famous teacher of dance. Venetozza also took up teaching, but seems also to have found a better way to make considerable money which at his death (18 July 1894) he left to charities. Caroline had predeceased him (d Montrouge 1 June 1885), leaving a fine pedagogic legacy to French dance. 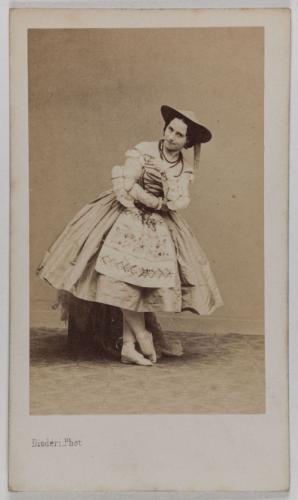 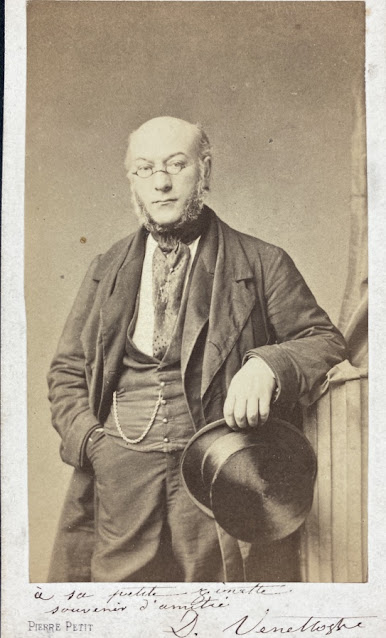 ‘Mademoiselle Aline’ was actually Françoise Dorothée Dorlé (b Paris 2 March 1808), and a rather different kettle of fish. She, too, had been around a while before the coming of Napoléon, and had been a chorine at the Opéra and then a prima ballerina in the 1830s. At her return to the Opéra, she transformed herself into a character dancer and mime, to extend her career, as the favourite 'old woman' of the establishment, into the 1870s. She died, unwed, 9 March 1891 at Asnières. Of her private life I know nothing, but the occasional memoirist winks an eye, another tells us that at one stage she was 'all powerful' around the place, so I imagine … 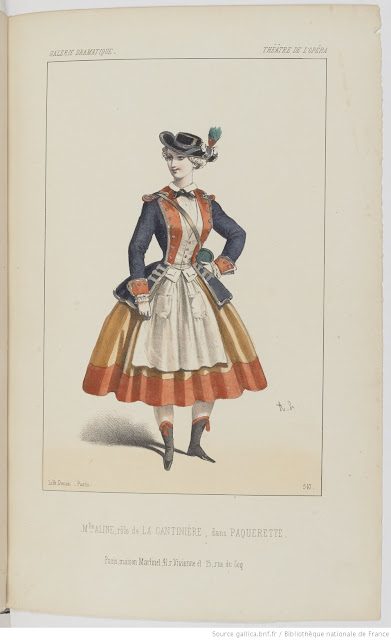 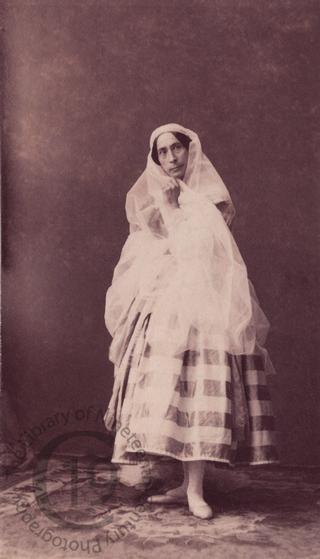 Louise Marquet (b Tours 12 May 1834; d Paris 22 December 1890). One of three (or was it five?) probably illegitimate sisters, followed her to-be-well-known siblings [Marie Louise] Mathilde’ (1826-1900) and [Josephine Victoire] Delphine (1824-1878), into the corps at the Opéra as a child, Louise, after her adult debut in 1849, found herself there a job for life. Since Delphine was the mistress of manager Nestor Roqueplan and Mathilde of Edgard Ney, ‘le Prince de la Moskawa’, she was well-placed. She, however, made her way on merit to the position of sujet, created many new roles – particularly those of the ‘superbe’ commanding type – over her long, and following her retirement from the stage, after nearly 40 years as a dancer, she became a ballet-mistress and teacher of deportment at the Conservatoire. The Marquet theatre legacy continued through Delphine’s daughter-in-law, ‘Louise Marquet’ née Loisel, and her daughter, actress Mary Marquet (1895-1979), while Mathilde finally married the baritone Marc Bonnehée (1828-1886). Louise apparently died a Mademoiselle. Whether she lived as one is rather obfuscated by the bright lives of her siblings. 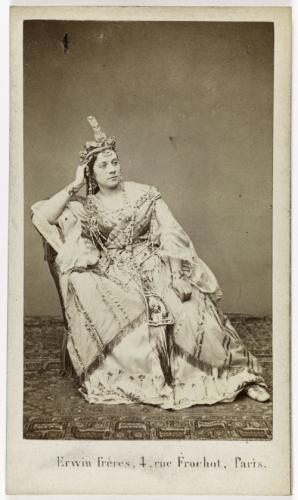 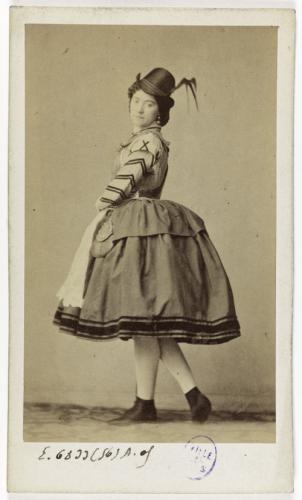 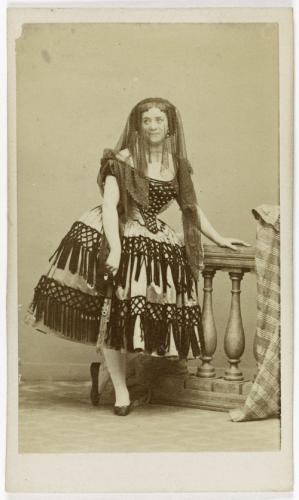 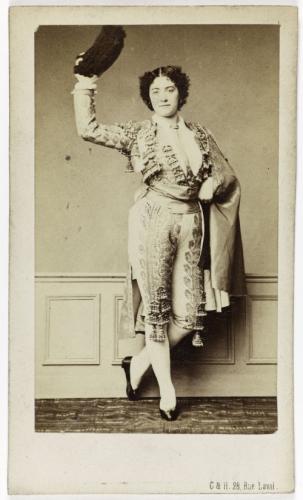 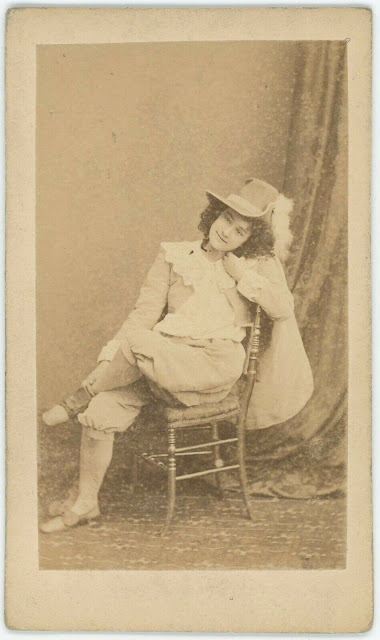 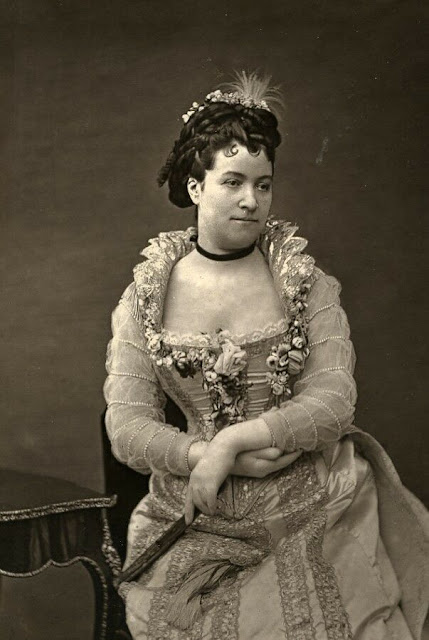 My computer desktop is flooded with danseuses ... I shall deal with them tomorrow ... here endeth Chapter One.
Merante and Martha Mouravyeva 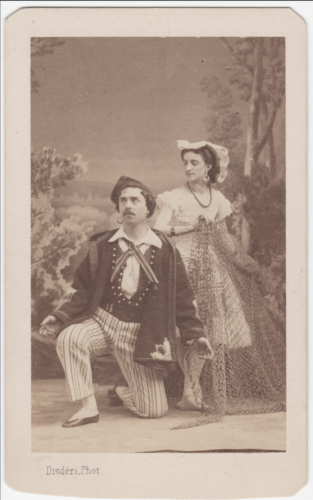 K, really enjoyed your article, CORYPHEES AND COURTESANS. I did not know much about Louise Marquet, but from your photos and the write up, I am now very interested.