.
In 1850 - 1851, when my little photographic survey is more or less beginning, the star dancer at the Opéra was [Marie] Adeline Plunkett (1824-1910). She had been on the stage for ten years already, and had been established as a première danseuse at the Paris house since 1845. She would shortly move on, after the establishment of the Second Empire, to the next stages of her colourful theatrical and amorous career on the other side of the channel and other parts of Europe. 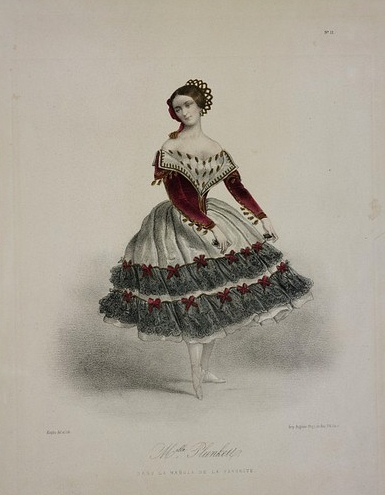 The names of the other most featured (female) dancers at the dawn of the Empire can be gleaned from the cast lists. Which of the sujets, and occasionally coryphées, got to perform the secondary solos, pas de deux or trois, or the operatic dance roles, such as the part of the ghostly Abbess in Robert le diable?

Three names appear the most often. One is our Mlle Caroline, the other two are Elisabeth Robert and Célestine Emarot. When the famous Le Diable à Quatre was given, with Plunkett as the heroine, it was Mlle Robert who took the opposing role of the haughty Countess, while Emarot appeared as Yelva. When Robert le diable was given, Emarot was the phantom Abbess of Saint-Rosalie, Mlle Robert succeeded to the part of Lia in L'Enfant prodigue, and the same two ladies joined la Plunkett in the featured dance of the opera Zerline. And much so forth.

Célestine Emarot, [EMAROT, Marguerite Adelaide] (b Dijon 18 March 1824-1892) who was clearly at this time well regarded (Egyptienne in Enfant prodigue), has not suffered well in memoirs and other subsequent writings. Her mistake seems to have been to have had a daughter (illegitimate, 'by a member of the Jockey Club, Baron Charles de Chassiron') who became much more famous than she. That daughter was Emma Livry (eig Emarot), who became a première danseuse at the Opéra, and scored herself a place in history by, at the age of 21, dying of burns received in a backstage accident. No, those artist's impressions of a ballerina on stage, in flames, are pure imagination. Anyway, Emma's fate has been recounted umpteen times, rarely factually, and her mother is often referred to as if she were a minor danseuse. She is also dismissed rather roughly in some of the memoirs of the time. But Célestine was a solid and apparently well-liked dancer for many years: I wonder who didn't like her. Or did her second lover, Vicomte Ferdinand de Montguyon, have enemies. 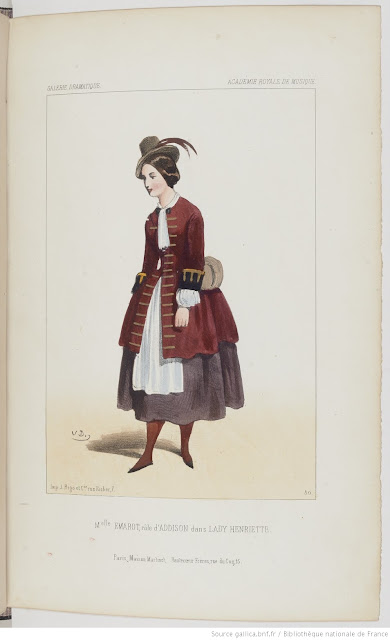 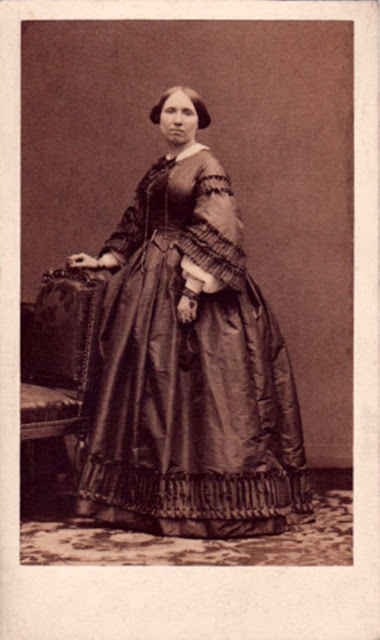 'Dark-eyed and dark-haired' Elisabeth Robert, 'star pupil of M Petit' at the Conservatoire, had been at the Opéra, also, for some years. I spot her in 1845. She created the Redowa with Petipa and Mlle Plunkett in Le Prophète. 27 June 1848, Paquerette with Cerrito in 1851 ('purété et correction de style'), the Pas du Delta in Enfant prodigue ('que vigeur hardi! quel feu! quel précision'), danced Luisetta in Stella ('comme mime Mlle Robert est convenable, comme danseuse  elle est excellent') and Fenella in La Muette de Portici (1851), and appeared at Covent Garden as première danseuse in La Rosiera. In 1852, she danced another season in London, and in 1856 she travelled to New York to become a much-fêted star dancer at Niblo's Gardens.
The memoirists' reports of her skill and her person, of course, vary. They do with all these ladies. Because the gentlemen reviewing and remembering have their favourites, their disappointments, maybe even their mistresses ... The Sporting Journal insists that 'to no inconsiderable degree of grace, unites a charming person', The Musical World judged her 'very talented, and an elegant dancer. Her features are expressive and her attitudes graceful and natural...' in France 'inimitable d'élégance et de précision'. Other dismissed her in a line or two, and went on to gush over someone else. I see her still, in 1867, premiere danseuse in Holland ..America loved her. So, apparently, did the Marquis d'Aligre who bequeathed her 100,000 francs to 'retain her virtue'.. 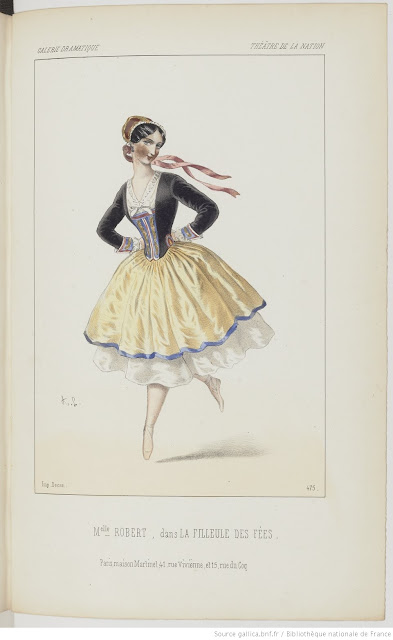 I go back to my Enfant prodigue list. To the cast list of the Ballet des Nations, for Auber's opera Zerline ... Plunkett and Fabbri starring, Robert, Caroline and Emarot supporting ... who else turns up in a featured role at the turn of the demi-century?

Mademoiselle Nathan (b Vallières 7 December 1827) 'pupil of St Léon' is already a featured coryphée in L'Apparition in 1848, and thereafter seen playing, often in a featured number, in almost every ballet produced at the Opéra through the fifties and early sixties. She partnered St Léon in ventures to the Théâtre Lyrique (Le Danseur du roi, 1853) and to Vienna (Paquerette at the Burgtheater 1852) and a contemporary wrote 'Mlle Nathan est une des étoiles de notre ciel choréographique'. Tracking down her picture has not been easy, for there are other Mlle Nathans about in these years. Even one at the Opéra: a blast-the-ceiling-off soprano who was a little older than our girl. But I can identify one. Here she is in character, with her contemporary Carlotta Morando. Guess which is which! 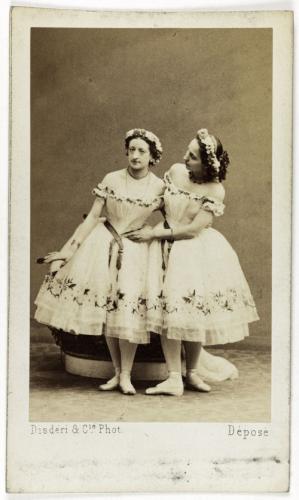 Apparently Miss [Adèle] Nathan was (like her operatic counterpart) actually Mrs Nathan. Or so one cataloguer would have us believe. He credits her with seven children. Anyway, she was clearly a first-class dancer, and when she retired in 1866 she, like Emarot, was granted a government pension. It lasted as long as the Second Empire.

Actually, the 1848 cast of L'Apparition shows us several other already well-established danseuses of the Opéra ballet. Now, one has to be careful here, because programmes in those days were taken down from aural sources, not written, so anyone less than a star can have their name distorted almost unrecognisably. I have sorted out the supporting dancers as being three Marquets, 'Mathilde', Lacoste, Toussaint, Nathan, Legrain, Quéniaux and Rousseau The corps included Savel, Cassegrain, one of the Laurent sisters, Danfeld ('will stay a coryphée forever'), Guichard; the 'children' Gredelue, Mirmont, Crétin, Innemer (by any other spelling), Mathé ...

All right. I know you've been waiting for a bit of sauce and scandal, so let's get this first big semi-proven chunk out of the way. Constance [Adolphine] Quéniaux (sic) (b St Quentin, 9 July 1832; d Paris 7 April 1904), the illegitimate daughter of a 'gazetière', was long an appreciated sujet at the Opera. The list of ballets, operas and roles she undertook would fill a page, and, in 1859, when she danced solo in Les Vêpres Siciliennes the press nodded 'Mlle Quénieux s'y montre danseuse du goût; aussi receuille-t-elle en bravos mérités le fruit de son travail soutenu et persévérant. Mlle Quénieux est une des artistes aimées de l'Opéra; elle a de la tradition et un spontanéité de mouvement admirable. Son talent est plein de fraîcheur et plaît aux juges les plus sevères en matière d'art choréographique'. Her place in the hierarchy of the Opera ballet can be seen in the original casting of Le Corsaire in 1856: behind the Médora of Rosati, the featured dancers were Louise Marquet, Couqui, Caroline, Nathan, Quénieux, Legrain, and Aline. So Constance was not just another danseuse, she was one of the Opéra's A team. 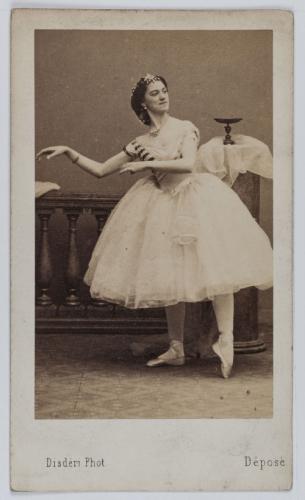 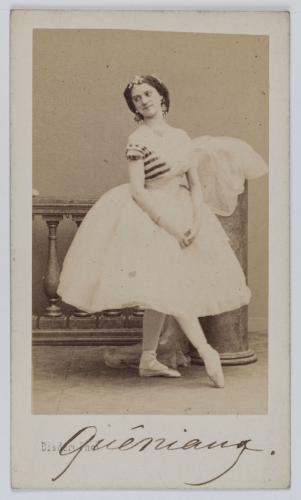 But it was not for being a fine dancer that Constance has gone down in history. Nor even for being the adored 'lucky mascotte' of the troupe' for whom nothing went wrong. It was her private life. Constance became the mistress -- or, one of the mistresses -- of the very rich, prominent 'érotomane' Ottoman statesman and art-collector, known as Khalil-Bey. Khalil added to his art collection by commissioning pieces from contemporary artists, one of whom was Gustave Courbet, for his private delectation, and one of these was the picture known as 'L'Origine du Monde'. The picture -- which is simply a rather beautiful representation of female genitalia -- has been written about endlessly, and it has become the fashion to claim that Courbet's model (he needed one?) was our Constance. You know the kind of books and articles that claim 'at last, revealed, the identity ..'. Well, whether the model was indeed Constance or not, she is nowadays credited with the adventure, and has become the subject of all sorts of guessworkical writings. 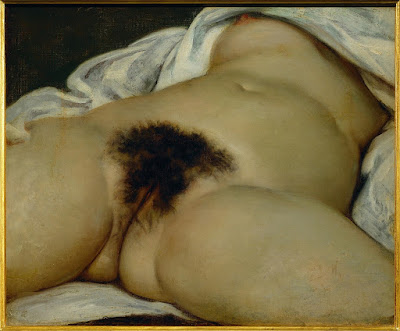 Khalil Bey died in 1879, not yet fifty. Constance did much better. She lived on in luxury in Paris to the age of 82 (her death certificate says 75!) and the catalogue of her effects, sold up by Druout, makes lavish reading. Death certificate? Yes, so popular is Constance, thanks to the painting which may even not be she, that in the 21st century that a Parisian researcher, Benoit Maury, has exhumed her birth and death registrations ...

To complete the A team of that time, we have that slightly puzzling lady, Mlle Victorine Legrain (b circa 1833). She puzzles me because, after a notable start and a quick rise in status she apparently hit a hiccough, and, although regularly featured at the supporting level in Paris, only became a star when she left France. One commentator classes her as the best performer of the time, behind the big stars. Émile Abraham's brief sketch of the ballet, after a good gush over Rosati, Ferraris and Zina Richard, devotes just two indifferent lines to her. Puzzling. But these gents have their 'preferences'. Mlle Legrain is said to have been 'a child of the Opéra'. Another illegitimate daughter of a dancer? Anyway, she learned her dance there, and burst on to the scene, in her teens, in 1850, dancing Le Violon du diable and Stella. But then her career turned in an unusual direction. Instead of rising up the ranks at the Opéra, she shot off to London's Drury Lane to take the lead role of Lia in their huge production of L'Enfant prodigue. The spectacle ran, nightly, a full season. Victorine followed up around England (Une soirée carnival, La prima ballerina) and ended up ... back at the Paris Opéra no longer a prima ballerina but a supporting sujet. She stuck it for what looks like about four years, but it seems Mlle Legrain, in spite of being well and frequently featured, wasn't content with sujetdom. Or someone wasn't content for her. In 1857, she resigned. There is no place here for a French étoile, mumbled the devoted press, confronted with the fashion for fancy Italian danseuses.
So, Victorine went to Turin (surely there was a man in the picture!) and the Vienna Hofoper, and she became a danseuse étoile all round Europe. In 1869, Nestor Roqueplan brought her back to Paris, to star in his Châtelet production of La Poudre de Perlinpinpin, after which she returned to Austria and Germany. In 1873, one critic remarked rather cruelly 'sie tanzt wirklich sehr gut. Ihre Pirouetten und Entrechats sind jung gebleiben, nur das Gesicht ...'. She seems to have visited Manchester in 1875 (if it were not an impostor) to dance in panto. 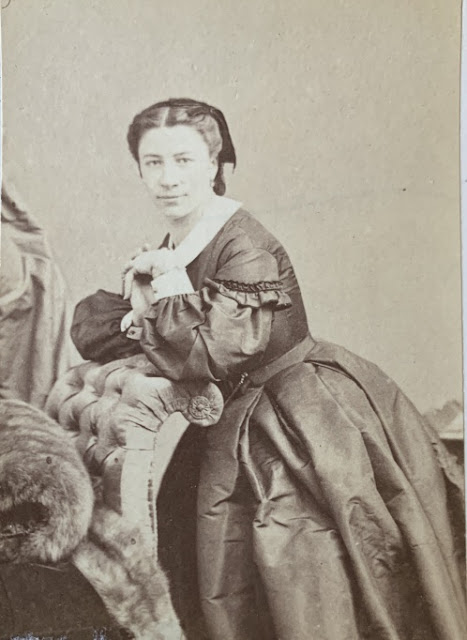 Nobody seems to know what became of Mlle Legrain. Evidently, she remained based in Turin where she became well-established as a teacher. And...? What do I know of her life? The only anecdote I find of her is of a 'relationship' with the Sicilian Prince Petrulla, sometime loyalist Neapolitan ambassador to Vienna and ... yeah. 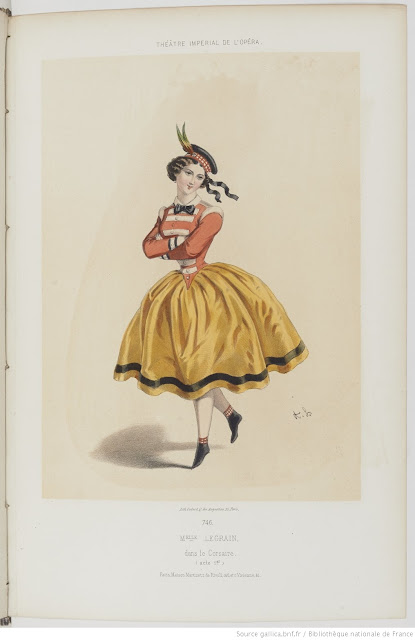 End of episode. For my next, I'll go back to the Corsaire (b) team: Mlles Cellier, Poussin, Troisvalets, Pierron, Villiers, Savel, and Rousseau.

PS I'm sure there are ballet books that have the details I'm missing. But I'm picking up from primary sources ... I prefer that! 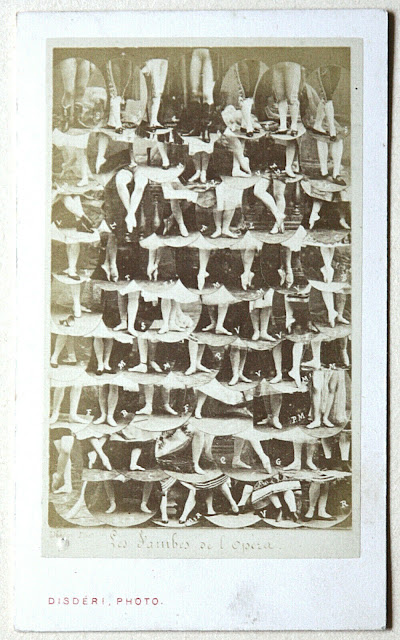 Posted by GEROLSTEIN at 9:36 PM