Baranowski, or the Stonemason of Harborne. A sad tale ...

.
Well, today was meant to be packing up day. But in my m(e)andering yesterday, I bumped into Mr Elisha Mander of 29 Bull Street and 4 Hall street, Handsworth, Birmingham. Leather case manufacturer, photographic and jewel case maker, employing 18 men and 50 women and children ... But Mr Mander was also a photographer. I see him at it way back in the early 1850s, though I don't think I've bumped into his work before.

There were just two photos bearing his imprint, here, under my eyes. And labelled! Very cryptically, but something to go on! 'Mr Mitton' with a little girl and, yes, 'Mrs Mitton' with a baby. So I thought, well, maybe, just maybe, I can sort them out. And guess what, I think I have. 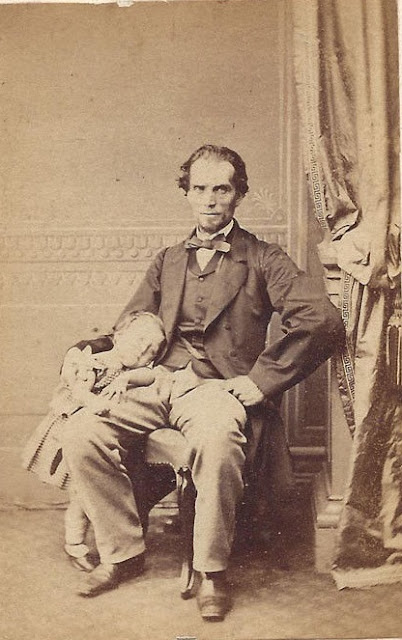 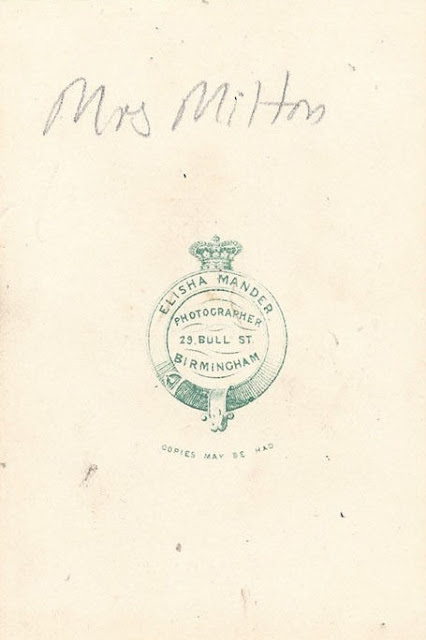 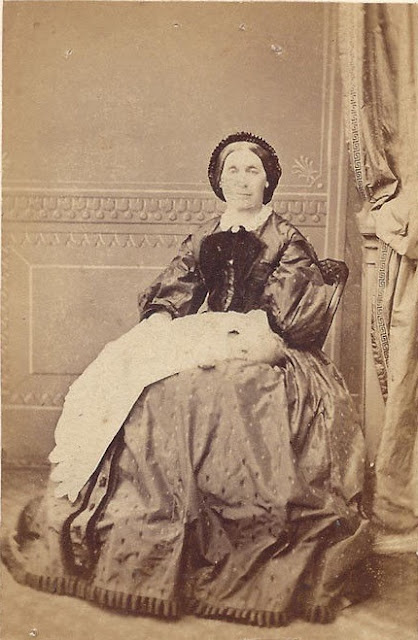 The first step was to forget 'Mitton'. The name is clearly 'Milton'. And we're in Birmingham, and Mr Mander is at 29 Bull Street. Which seems to house, also, Mr Marris's furniture and carpets. So these pictures were taken sometime in the 1860s or the 1870s. I reckon early 1870s. So what more simple than to hie me to the 1871 census and find a young family named Milton, maybe with a little girl in tow.

Bullseye. There's only one that comes near qualifying, and it hits the target absolutely. I think I am right in saying that we have here Mr Thomas Milton, stonemason (b March Cottages, Cheltenham 1847, x 12 July), his wife Eliza née Harris (b Birmingham c1848), their 2 1/2 year old daughter Sarah Ann Emily (b Oxford 1869), and their infant son, Ernest Harry (b Birmingham 1870).

The stonemason, his wife and children seem to have lived their lives quietly ... but the ending was not to be a happy one. In the 1881 census, Thomas is in Cross Street, Birmingham, alone, a boarder in someone else's house. Little Ernest is farmed out on Mrs Milton senior, née Mary Pimble, a church cleaner, who still has two of her own sons at home. Sarah Ann, I cannot find. Nor Eliza. But she turns up the following year. In the churchyard. I wonder why ... childbirth?

Because there was a third child. Minnie. Born in Birmingham in 1873. And died there in 1879, aged six. 1873? Maybe it's Minnie and not Ernest who is the baby in our photo. Making the parents 26-7. And that would allow Sarah Ann to be more than 2 1/2. More like four. Yes? You who know about babies, tell me. It feels more comfortable to me. So why did Ernest, then, get left out of the photoshoot? Is there another photo lurking somewhere?

I get a bit lost now. In 1891, I can find only Sarah Ann, working as a domestic servant in a schoolmaster's house in Edgbaston, before she marries, on Christmas Day George Henry Cutler, saddletree-maker. Ernest is still with granny, in Great Colmore Street, and has begun his lifelong work as a bookbinder. He, too, would marry: Rose Broughton. But where is father? On Sarah Ann's marriage certificate (she is also of Great Colmore Street) he is listed as 'stonemason' and it doesn't say 'deceased'. Yet it is Rose Broughton and a Frederick Milton who are the witnesses. And when Rose marries Ernest (always of Great Colmore Street) he is still not noted as deceased. But it is Rose's father who is witness, and no Milton.

Well, Sarah Ann and Ernest carried on the family. Sarah had a daughter and two sons, all of whom wed and one of whom seems to have emigrated to America. Ernest had a son, George Edward Milton ('high pressure boiler operator) who married in his turn ... and, well, I didn't intend to follow the family down to the present day, but it was kind of easy, so I did. Both Sarah Ann's and Ernest/George Edward's branches still sprout merrily ...

And if Andrew and Christopher Baranowski and their children, down in Welsh Wales, and the offspring (if any) of Doris Florence and Joseph Bedford, Thomas William Edward Milton and his wife Eileen née Roberts, Mrs Mary Buena Shephard, Alfred I E and Inez Milton, want to see what their ancestors looked like ... well, here they are!  And, perhaps, in return they could tell me what exactly happened to Thomas, and why Eliza died at 34 ...

Photos courtesy of another grand e-bay shop: Music-Ad World. To which I am returning now to revel in the other goodies to be found there.

PS. I hope that Thomas's father was not the Thomas Milton sentenced to 7 years transportation in 1851 for serial theft.