.
It’s D for Departure Day minus 1 ½. My beloved Winter Palace has been stripped bare of all my personal belongings, and is looking rather lonesome. Five big wheelie boxes are waiting to be transported to the basement, where they will reside till I return next autumn. A bit sad, but last year I left all sorts of stuff for the enjoyment of the summer guests and half of it ‘walked’.


So here I was, at midday, having been massaged, and haircut, and … surrounded by two bottles of bubbly, one bag of frozen broad beans, four bananas, some suspiciously elderly looking turkey, two eggs, half a onion, one blood sausage … and, of course, my computer. Well, the computer should take me through to what likes being a slightly odd dinner time … so whom shall I tackle this afternoon?

Well, my mind was made up for me. My dear friend Elizabeth wanted some help with one of her ancestors, and, on my way there, I wandered into Gilbert-and-Sullivan land … fatal!

HMS Pinafore.Well, we know all about the folk who created the principal roles, don’t we? I’ve even ‘done’ Fred Clifton, Jessie Bond and Harriet Everard this year. So, who is there left who is still a puzzle? Why, ‘Mr Dymott’. Bob Beckett, the carpenter’s mate. Always just Mr Dymott. No first name, no past, no future … Well, he has all of those things as of today. Here we go. 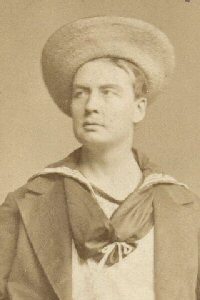 Aeneas Joseph Dymott was his full name, and like most of the Dymotts in Britain, he hailed from Hampshire. He was born in Southampton, the son of James Dymott, a tailor (d Broad Street 16 September 1863), and his wife Sarah née Frith (d Albion Place 6 July 1854) who can be seen in 1841 living in Parsley’s Court, French Street, with Nancy (b 12 September 1818, Mrs Henry Brice), Julia Mary (d 17 December 1885) and our lad. The girls would go on to be schoolmistresses, Aeneas established himself as a woodcarver.

Well, that was his day job. But young Mr Dymott had a big bass voice and when he wasn’t carving, he sang. But before I spot him singing, I spot him breeding. He had daughter, Julia Frost Dymott (1853), by a young lady named Eliza Frost, from Sunderland, married her four years later when a second daughter, Eliza Nancy, arrived, fathered a Mary in 1858, an Aeneas Frank in 1860 (replaced by another in 1862), and lost his wife when she was but 35. He would quickly remarry, one Ann Cress[e]y, daughter of a carpenter from Templecoombe, Somerset, and have yet another daughter, Celia (Cecilia Annie) …

But, by this time, Mr Dymott, installed with his family at 4 Hanover Place, was only carving wood part time. He was part of the male ensemble at Evans’s famous Supper Rooms (1863, with Messrs Brady, John Whitwell, Bamford, Smith, J Hogan, Godden, Way). Evans’s wasn’t often covered by the press, so I don’t know when he began and when he ended, but the vocalists tended to stay, and I see him again in 1868, as ‘second ie low bass’ with Messrs John Whitwell (baritone), Barrett, Ball (tenor), Walton, J Hogan (baritone), Smith and Matt Cooper, intoning ‘The Old Church Bell’ to the chop and porter male audience.
But between times, he had been seen further afield. In 1867, I see him as basso soloist (‘Down among the dead men’) at both the Canterbury Hall – with Emily Soldene and Alfie St Albyn, no less – and at the Oxford, singing solo in a selection from The Ruins of Athens. I suspect there were many, many more such, unrecorded occasions. In 1871, he (with Hogan) was on the programme at Store Street Rooms for the concert of George Allen, bass soloist at the Philharmonic music-hall. And in 1877 he went on the musical stage. The occasion was the (vanity) production of a Macbethish ‘opera’ entitled Biorn of which the details can be read in my British Musical Theatre Volume I. Its cast was as unusual as its text, and our Aeneas was featured alongside the author’s amateur wife Mrs Fitzinman Marshall and the indifferent Italian baritone, Mottino (very briefly of the Carl Rosa) as the Norwegian thane and his bloody wife. Gerard Coventry and what seems to have been the young ‘Giulia Warwick’ were part of the wreckage alongside some Italianate names which were probably phony.

Giulia, as we know, went in to play in The Sorcerer. I wonder if Aeneas was in that chorus. He was nearly fifty, and in the next census he would describe himself as ‘woodcarver and chorus singer’. But for HMS Pinafore a real bass was needed for the glee, and so our hero got the part that would make us, 150 years later, remember and write about him.

But, please, Mr Dymott did not come from nowhere. By the time of Pinafore he’d been known as a low bass singer in the Covent Garden area for at least fifteen years.

The future is not so happy. When the split happened at the Opera Comique, Dymott chose to go with the money men, and moved to the Imperial and the Olympic productions of Pinafore. If he was looking for security, he backed the wrong team. But it didn’t really matter. He played in Pinafore, in the succeeding Marigold, filled in his 1881 census papers, and weeks later died. Aged 51.

Ann remarried, in 1887, a groom by the name of Thomas Stokes. I see that Eliza Nancy died aged 60, unmarried, and that Ce[ci]lia Annie became Mrs John Joseph Day, and had five children. Aeneas junior (‘sculptor, woodcarver’) appears to have lived to 1940.

Bother Victorian attitudes! I would love to know more about the early music-halls and Evans’s in particular … but, no. The press covered the Italian opera, Madame or Mademoiselle Telle ou Telle’s concert … but not Evans’s Supper Club. Which didn’t need the press to find its audience. But, sadly, left us with little knowledge of what was sung (as opposed to eaten, drunk, ruded and blarnied) there …

Anyhow, can we henceforth give Aeneas his proper name … and, is that the Pinafore originals tidied up now?

PS OK. NOT the last mystery. Here's another:


BICKERSTETH, Frederick Langdale (b Liverpool x 6 July 1846; d 24 Ladbroke Grove, Notting Hill, 28 February 1901)
Son of Thomas Silvester Bickersteth, a Worsley, Lancashire, straw merchant’s clerk, and his wife Sarah. However, when he married Eliza Major ‘of Walmer Grove’ at Birkenhead in 1869, his father was described as ‘Esq of Kingsland, Oxton, Cheshire’.
I see him in 1871 described as 'marine insurance broker' in Tynemouth, and in 1891 he insists on 'operatic vocalist.' A rather discreet one I feel ...

Posted by GEROLSTEIN at 3:41 AM