The World of Waimea or, Ganzl to Ellis in fourteen steps ...


On this little plot of land, I was brought up, not knowing ... 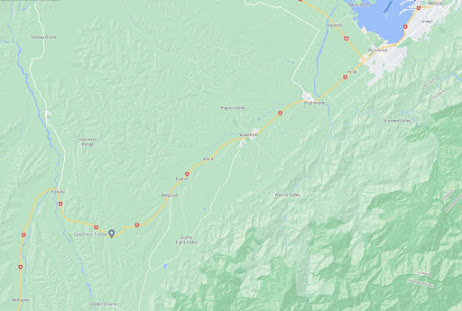 After the shock of finding a bevy of distant relations (really, my cousin Nerole's relations, but that makes them mine by marriages interposed) on geni, I thought I had better find out who these folk were that linked me to the Post Office Hotel in Collingwood. Follow that geni .... 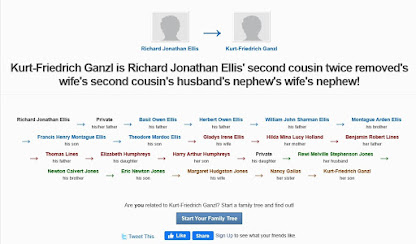 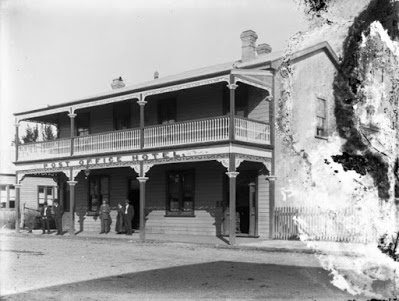 The start of the chain, going backwards, is simple.
(1) me [and brother John] 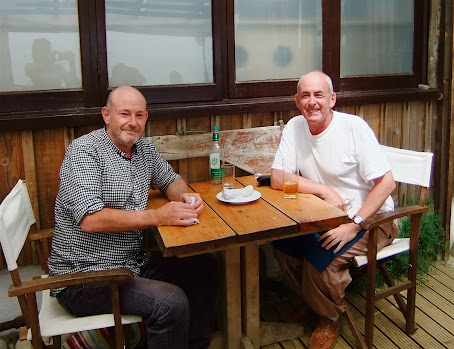 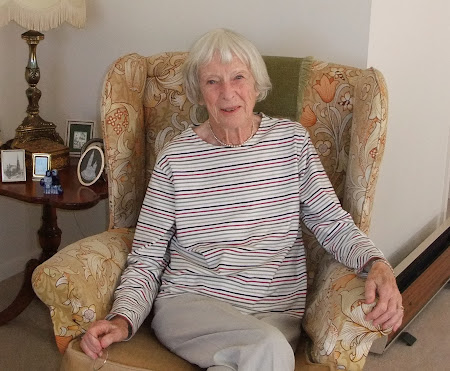 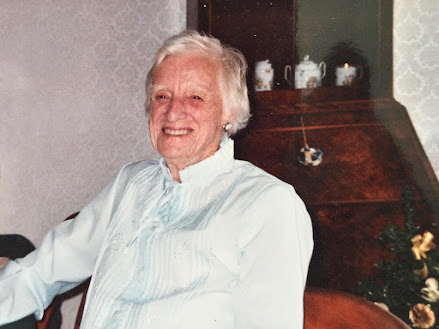 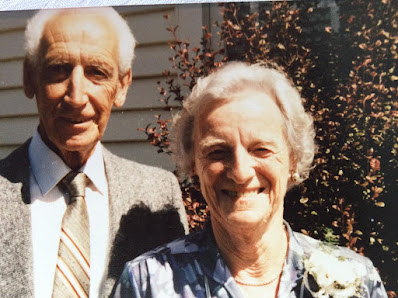 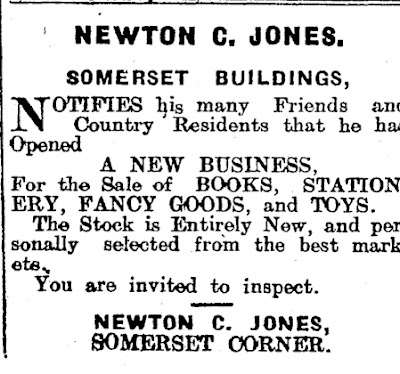 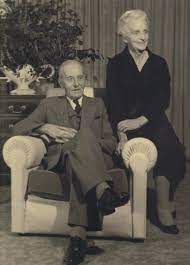 Now into the previously unknown. (8) Hazel's father was Harry Arthur Humphreys (b Southbrook, Rangiora 28 February 1874; 14 July Ashburton 14 July 1953). Oh, heck, I shop weekly in Southbrook and Rangiora. Its 15-20 minutes from Gerolstein ... I see he was for a while a draper in Kaiapoi. This is all awfully close to home ... Harry became cornettist, conductor and bandmaster of the Ashburton Brass Band in the early years of the 20th century, and I see him still, in the 1940s, as choirmaster of the Baring Street Methodist Church Choir.

(9) Harry's mother was Elizabeth née Lines. She ('late of Payne Street, Rangiora', died in Sydenham and is buried -- oh no! in Rangiora 18 February 1922. I've often wanted to explore the old Rangiora cemetery. We pass it half a dozen times a week. Elizabeth was born in 1839, and she and her father, stepmother and two brothers can be seen in the little village of Maidford, Northants (I bought my first house in Rothwell, Northants) in the 1841 census before they all emigrated to Nelson the following year. She was married in Holy Trinity, Richmond, in 1858, and Elizabeth and her husband Frank Humphreys, also from Northamptonshire, had thereafter nine children. I need not say that I spent my schoolyears living in the village of Richmond and knew the little clapboard church well (from the outside), a hundred years later ... oh! maybe it wasn't so little, the school path (1956) only led past the front view  ... 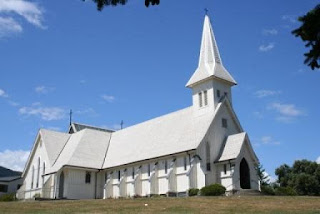 I see that Frank, who seems to have been a chaff-cutter, after various vagaries including bankruptcy, died after being thrown from his horse and cart in Kaiapoi in 1890 (23 May) and that he, too, lies in Rangiora Cemetery!

(10) Elizabeth's father was Thomas Lines, an agricultural labourer in Maidford, and she was the child of his second wife, Ann Sarah née Blackwell.
However, Thomas had two sons by his first wife, Sarah née Jones, who had died in childbirth of a third in 1833.  On their arrival in New Zealand, they settled in the tiny almost-village of Hope and Thomas was still there when he died, forty years later, 23 April 1885. Eldest, English-born son, John, died at Hope 21 December 1883, but Thomas's New Zealand-born children populated the Nelson province for many years.
When Thomas died, aged 83, his obituaries were printed from one end of New Zealand to the other as 'one of the pioneer settlers'. He is buried in Richmond cemetery. I wonder if that's the same Richmond cemetery a few hundred metres from my Cheyne Walk home ... 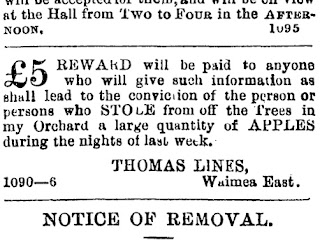 Ah! How often did the young Kurt ride through all these places on his maroon Raleigh bicycle in the 1950s ...
Now we're on the descending track ....

(11) The other of those sons/Elizabeth's half-brothers who was born in England was Benjamin Robert Lines, who arrived with the family 25 October 1842 on the 400-ton Thomas Harrison at Nelson, after five months' journey, at some 11 years of age. He seems to have worked as a thresher, had a property at Ranzau (yikes! I can smell the silage on Ranzau Rd to this day, but I had to go there for the comb honey!), and at Wakefield ...

But hang on. So who was the Benjamin Lines drowned in the Wai-iti River in January 1847 and buried at Wakefield Church? 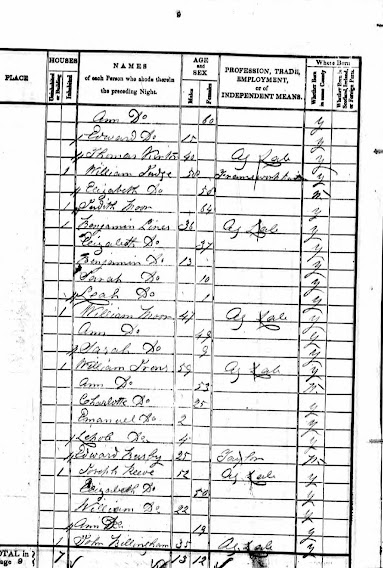 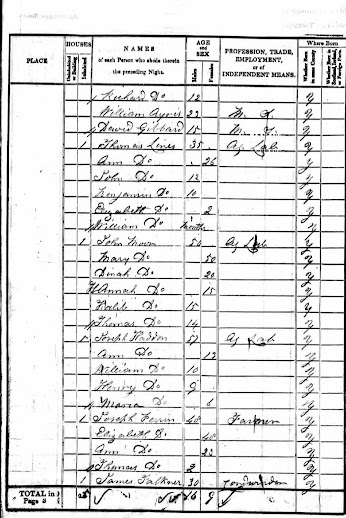 Well, it seems that some folk may have their Lines a wee bit crossed, for he is not our man but a cousin or something. That census shows three Benjamin Lines amongst the population, all three of whom emigrated to New Zealand. I gather the local vicar was behind the exodus.

The elder Benjamin was to become a farmer at Woolston, and lived to the age of ninety (d 14 January 1895) 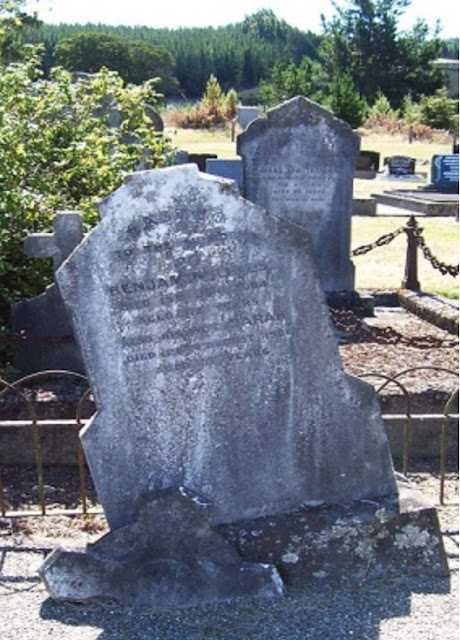 So, Benjamin 'of Wai-iti' married one Sarah Tunnicliff (oh! I went to school with the Tunnicliff boys! Thought. I was related to them?), daughter of Thomas Tunnicliff (d 25 October 1882) 'of Hill Hall Wakefield' another landholder in the Wai-iti Hills. The Tunnicliff Forest at Wai-iti Domain commemorates the family. Benjamin and Sarah bred six babes in ten years before Sarah's death at 35. The widower had to adopt out his third surviving daughter (who wed a scion of another notable local family, the Baigents), but it is second surviving daughter Minna Lucy Lines (b Nelson 22 February 1857; d 4 Grove St, Nelson 2 February 1938) whom we now follow ...

(12) Minna married (Spring Grove 30 December 1874) Joseph Holland son of George Holland of Foxhill. I see that father and son had 300 acres in the Wai-iti Hills 'in a valley running in a south-westerly direction from the south-west corner of Higgins's leasehold ..' and that Joe added the lease 'for agricultural purposes' of 200 acres in the Aorere valley to his portfolio just before his marriage. I see him thereafter contracted for 'thirty two chains of gravelling' by the Waimea Road Board (father was on the board), appointed secretary (father was chairman) to the Foxhill School Board, and adding yet another 200 leasehold acres in Collingwood to the holdings of "Holland and Thomas". In 1885 I see him tendering unsuccessfully (vastly undercut) for the construction of Motupiko school. In 1888 I see he is growing hops and brewing beer 'at Belgrove and Owen', and suffering a broken leg in a riding fall on the way home from Lyell. 'By dint of coo-eeing a Chinaman who was in the neighbourhood was attracted to the spot and ...'. In 1890 he made the news in a less painful way when the Belgrove-Motueka Railway was constructed through his land, in 1892 'Mr Joseph Holland's Brewery at Fern Flat, Buller' was burned down, and he then tried to sell his Belgrove property, but let it instead and it too was destroyed by fire.

He next purchased D M Chapman's property 'on the Waimea Road, with brewery, hoptonic factory, fruit gardens and vineyards &c', next to the Church Trust property, in 1898. I see in 1910 he is President of the Nelson Defence Rifle Club and 'supplying the Railway and White Hart Hotels, Richmond'. Omigod, do I remember Frank Wilson and the Railway Hotel in the 'fifties ..!. 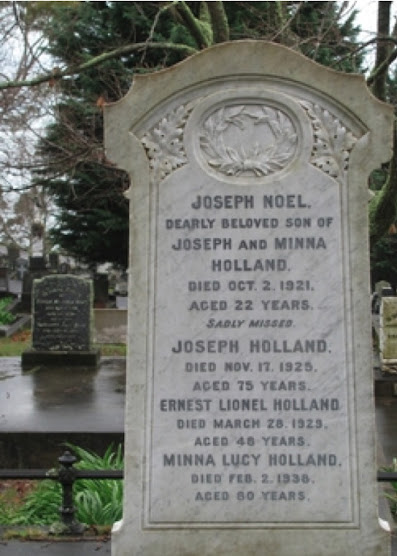 (14) and Gladys married Theodore Mardoc Ellis, grandson of Montague of the Post Office Hotel, and son of the Francis Montague Ellis of the Waiwera winery! 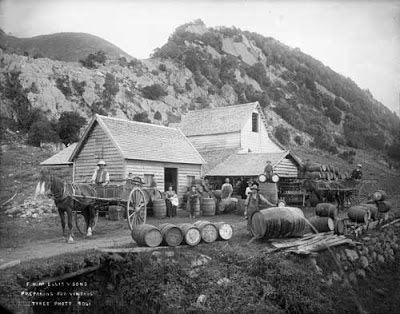 Minna gave birth to six children including (13) Gladys Irene Holland (b Nelson 1894; d Cromwell 13 September 1938. Cromwell! At last. A town with which I have nothing to do!

I see that 'the Roe family', descendants of Thomas and Benjamin Lines, have researched the Lines family minutiously at http://www.roefamilytree.info/index.php so I sha'n't do it again. Their 'contact us' button isn't working, but they may be surprised to find a Kiwi-Scottish-Austro-Hungarian Jew on their very extended family tree!  Of which but a fragment appears here :-)
I should say that my immediate family only ended up in Richmond by pure hazard. Father Fritz Eduard Ganzl (by then known as Dr Fred Gallas) immigrated to Wellington in 1939 to take up a post at Wellington Technical College. We removed to Richmond when he was appointed foundation principal of the new Waimea College. Little did we know that mother's family had pioneer roots there. He would have loved to know that!

Posted by GEROLSTEIN at 4:55 PM