An Hyslopian jigsaw: from Dumfries to Mile End Old Town

You couldn't help but snag your eye on this photo ... 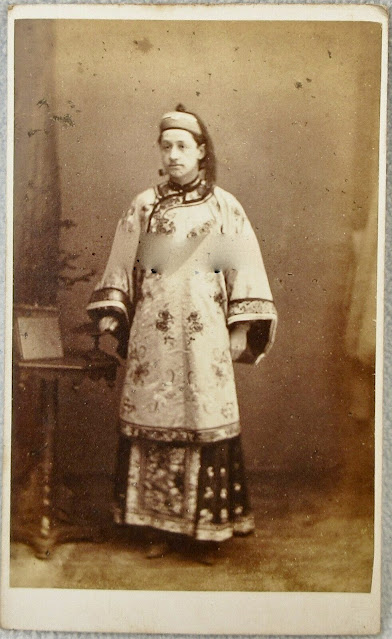 An evidently non-asiatic man, dressed in Asian costume. Is this for real, or is it fancy dress ... missionary or merchant uncle sent home these gowns from the Orient? ... the gent looks a mite uncomfortable (aw! mum do I have to?). Embarrassed? Gormless? In his twenties?

The person who has pencilled his name on the back (and named hundreds of other C19th photos as well) tells us that his name was Walter Hyslop. The photo was taken in Edinburgh. Hmm. I moved on.

In the same shop, I spotted another and, this time, wholly unidentified photo. Is that the same carpet? Is this from the same source, the same sitting? No photographer's mark. But I'm guessing, probably ... so, maybe this is a Miss Hyslop? 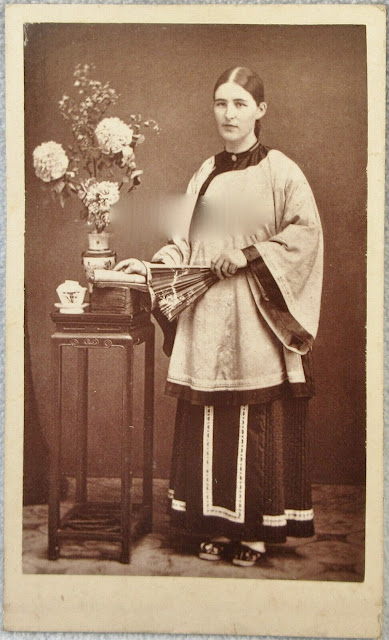 Not enough evidence, really, to pursue these transfuges from The Geisha or A Chinese Honeymoon. Oh, I don't mean they are actors, they evidently and awkwardly are not. These are not stage costumes. They are undoubtedly the real thing, from that era when 'everything one sees that's Japanese' was the rage, and when English missionaries and magnates were invading the Orient.

So I moved on through the shop. And I came upon a photo labelled 'Grandmother Hyslop Ackroyd'. Hyslop again? Too too coincidental. 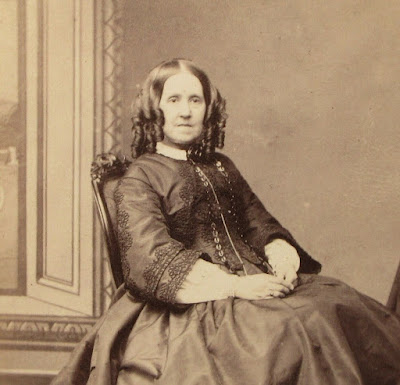 But this photo didn't come from Scotland, it was taken in the Mile End Road in the East End of London. Never mind! Once I had cleared up the fact that Mrs Jane Hyslop of Mile End Old Town had been born as Miss Jane Akroyd (sic, the penciller obviously didn't really know her!), daughter of Samuel Akroyd (clerk) and his wife Elizabeth, 16 November 1814, I knew I was on track.

Here we are. Mrs Jane Hyslop in Mile End Old Town in the 1841 census. With husband ... Walter, born Dumfries circa 1801, married 1835, and their children Jane, Ellen and one year-old Walter. Walter. Walters. I reckon I'm still on track! Husband is an insurance broker and ... Lloyd's Underwriter. Pardi. By 1851, the family has grown to six (one lost in transit), and there are two more to come .. no wonder Jane looks a little harrowed in this photo.

We know that the photo was taken after 1863, because the Barnes and Son studio moved, in that year, to 422 Mile End Road. But they stayed there till 1887 ..! So she is, in accordance with appearances, over 50 at the time. But the family removed from Bow to Kensington some time in the 1860s, so this picture was surely made before then.  So whose 'grandmother'was Jane?  Well, out of the eight surviving children of Walter the Underwriter, four -- including Walter jr -- died unmarried. So that cuts down the field by half!
JANE x Mile End Old Town 19 October 1836; d Montague Terrace, Bow 19 April 1853 aged 17.
ELLEN b Mile End Old Town 8 January 1838; d Croydon 14 March 1877. Mrs John Bisdee FAWCETT. Seven children. and a grandchild who labelled photos 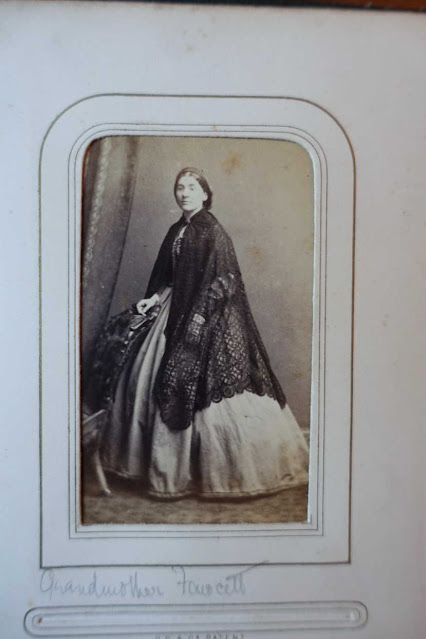 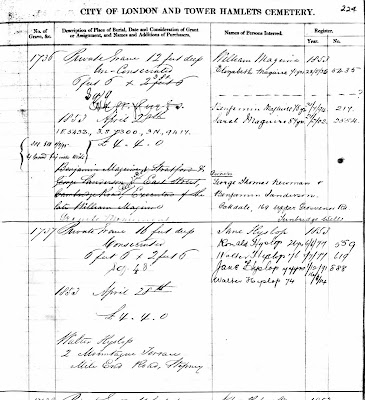 So, that's one photo fixed. The next? Is this 'Oriental Walter' the Walter son of Underwriter Walter and Jane?  If it were, as I suspect, taken in the 1870s sometime, that would make him in his thirties. And why is he being Oriental in Edinburgh. Is this a nephew or something ...
I've tried to trace Walter the Underwriter 'of Annandale' back in the Dumfrieshire records, but they keep throwing a Walter from Langholm who is NOT him and who married a Sibella Nixon, at me. There's one at Tranent ... Our man is already of St Botolph's, Aldgate in 1835. I mean he was a rich man, he presumably came from a well-off family ...
And Walter jr? He seems to have done nothing. He remained a bachelor, with rooms at 15 King Street, St James's, and presumably let his share of the family fortunes earn a living for him. He is variously listed as 'underwriter' and 'gentleman', and he can't have been a nincompoop for both father and mother named him, with brother Akroyd, as executors to their wills. Father left a huge 35,000stg. But perhaps he was a nincompoop: when he died, he was occupying one ground floor room, unfurnished, 18s6d per week, chez the Misses Bishop, court dressmakers, alongside a couple of life's other bits of Jetsam, and he left ... 133stg. I suppose you can't keep an apartment in St James's (where Christie's Auction house now is) for shillings. 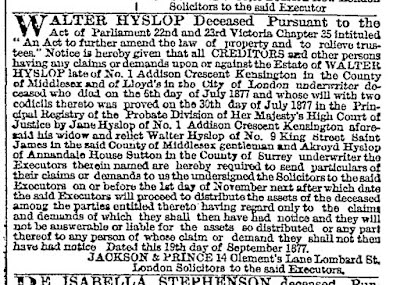 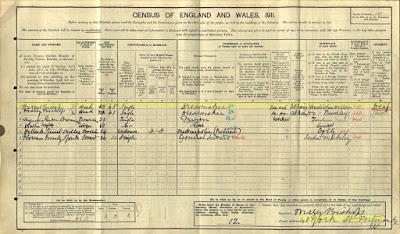 Ah, well. These photos surely have to be connected somehow. I can't think where else to look for proof. But the chase is begun ...
24 hours later. AND THE CHASE IS LAUNCHED. While I slept my champion English collaborator, Gina Ambridge, took up the baton. And she turned up what is surely a winner.
I was pretty uncomfortable trying to squeeze Walter the bachelor into that costume. 10-15 years wrong age, and London versus Edinburgh. But he was a start. Now, he's pretty much out of the picture ..
Gina and the Freemasons have found a grade one clue. Mr Walter Hyslop, merchant, joining the local Northern Masonic Lodge (senior deacon: Mr H R Hyslop) in Shanghai in 1872. Dropped out 1873 ...
Is this the Mr Walter Hyslop, China, reported in the Banffshire Journal as attending a society ball in 1864 in Inverness ...
Well, it's morning now ... I had better take the baton again ..
Oh golly! London and China Telegraph. Announcement of our Fanny's marriage ...    Chronicle and Directory for China, Corea, Japan ... he's listed from 1869-1873 but googlebooks won't let you see it.   The China Directory for 1862... W Hyslop of Gibb, Livingston and Co. Clerk. 1864 British Land-Renters in Shanghai: Hyslop, W. Hyslop & Finlay. China Directory for 1874: 4 Nanking Road. Still a clerk. But now for J C Helbling & Co. W Hyslop on the committee of the Shanghai Club . And is that he in the Bombay Gazette in 1863?
PS Walter Hyslop surfaces again ... and what IS he doing? This is surely fancy dress ... 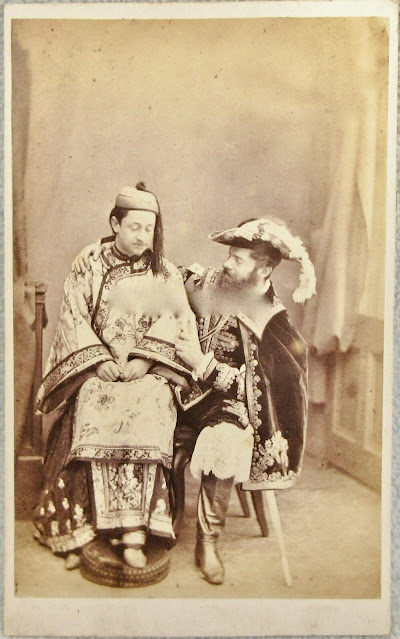 Posted by GEROLSTEIN at 9:55 PM