This week, I came upon this delightful postcard. Undated, virgin verso, just this ... it must, I thought, have at least a wee bit of a story behind it. 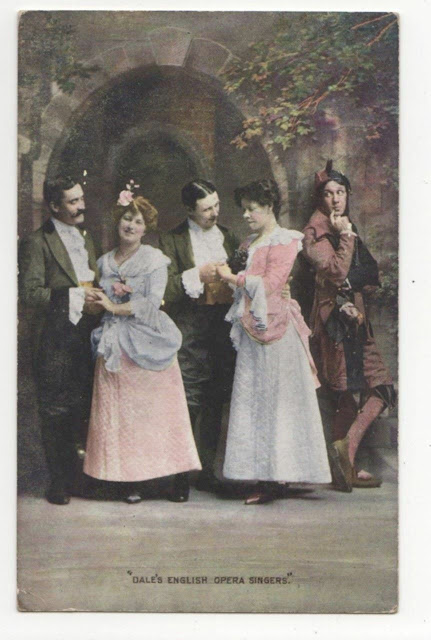 First glance. That chappie on the right has to be Jack Point. Right? So this is English Opera. And I don't mean Artaxerxes. It is English light and comic opera. A Songs from the Shows group of the 1890s or 1900s. Pier Pavilions and Mechanics Institutions?
Next, who is Mr Dale? Yes, it is he, the Jack Point. Frederic John Dale (b Weston super Mare 14 May 1872; d "Keep Cheery", Worlebury, Weston super Mare 1 March 1956). Son of a druggist, trained in music, pianist, humorist, songs at the piano, sketches, character pieces ...
And the prima donna of the group is Mrs Dale, née Edith Jane Serpell. I would pick that that is she in the pink frock and in full-face ... prima donna oblige. The other three ... contralto, tenor, baritone ... alas, I cannot tell, for the composition of the group, other than Mr and Mrs Dale, changed over the fifteen years -- yes, fifteen years -- of its existence.
But Mr and Mrs Dale were not the original performers in the troupe. The English Opera Singers, performing 'gems from the light operas' sprang from, and took much of their material from, the D'Oyly Carte companies. The instigator appears to have been Harry Virgilius ['Broughton'] Black, and his company included fellow Cartesians Adeline Vaudrey and Cecil Barnard. At various times it was advertised as 'The English Opera Singers', 'The original English Opera Singers', 'Charles Butler's English Opera Singers', before it settled down, circa 1898, to being Dale's English Opera Singers or, I suspect, Mrs Dale's EOS: for Edith it was whose superior and unpretentious performance gave the team its quality.
Edith SERPELL (b Truro 1872; d 99 Esmond Rd, Turnham Green 29 July 1916) was the daughter of pharmacist Samuel Serpell, from Pool in Cornwall, and his wife, Ellen Frances née Wilson. She took to singing as a child (I see her, aged 9, in the Truro People's Concerts), sang her way through Truro Girls High School and by 1888 had 'established herself as the prima donna of the Truro amateurs'. She sang around the local concerts for several years before enrolling at the LAM: I notice while her fellow students launched themselves on such as 'Softly Sighs', Edith got no more hefty than 'Rose, Softly Blooming' and 'With Verdure Clad'. When they did a Freischütz selection, she was Ännchen not Agathe. During her study years (gold medallist), she continued to appear in concert and, in late 1895, I first spy her concertising with the English Opera Singers: Miss Serpell, ex-Savoyarde Louise Lancaster, Charles Butler late of Carte's companies, Mr W H Webb (bass) and comic singer Mr Fred Dale. At Easter 1896 the team (now Serpell, Blanche Murray, J William Birtley, Webb, Dale) sang at London's Crystal Palace, and in 1898 (Serpell, Dale, Mandeno Jackson, Edith Bushell, Robert Grice) at the Alexandra Palace. 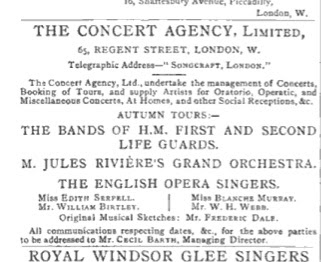 The team sang together when there was an engagement (which seems to have been freqently), and when there wasn't, Edith popped off sing Stainer's Mary Magdalene at Aylesbury, The Messiah with Lena Law and Charles Childerstone at Diss, van Bree's St Cecilia's Day at Billericay .. as well as giving her Cowen, Lehmann, Molloy, Tosti, Deacon songs et al in concerts. 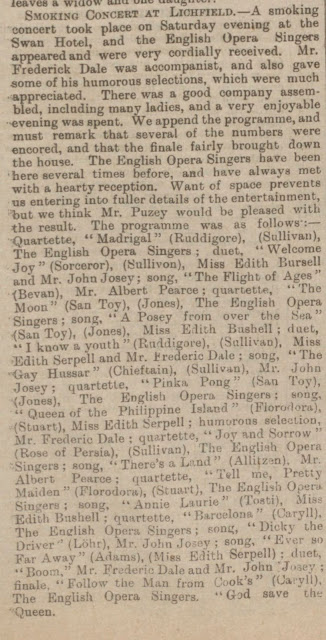 The group carried on through the 1900s, and in 1905 even took a trip to America and Canada (Edith, Fred, Claude Anderson &c) 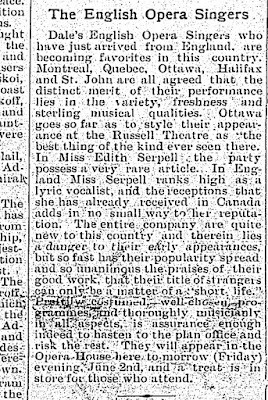 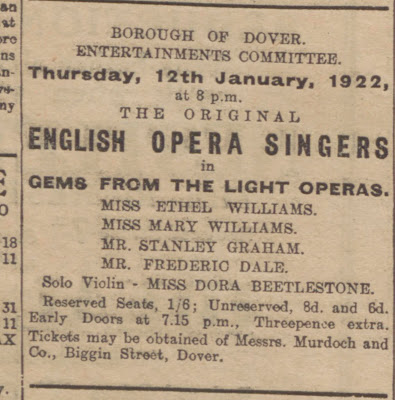 Well, I guess he had all those parts and scores in the attic!
Tracing the Opera Singers' history, I encountered a number of folk I already knew and have already blogged -- Charles Butler, Louise Lancaster and Adeline Vaudrey -- and also quite a few I wasn't familiar with, One day I definitely must investigate the Eugenia Morgan who turns up so often. But, of course, sopranos weren't needed. No Edith, no Singers...
Contraltos Edith Bushell (1870-1938) from Wendover, Violet Cooper, Florence Venning, Blanche Murray
Tenors Thomas Mandeno Jackson (b Remuera 27 November 1863; d Kawau Island 21 April 1908) the New Zealand auctioneer-vocalist, Albert Pearce, J William Birtley of the Savoy Theatre, Thomas Willey
Baritones W H Webb, Henry Bailey, John Josey ... 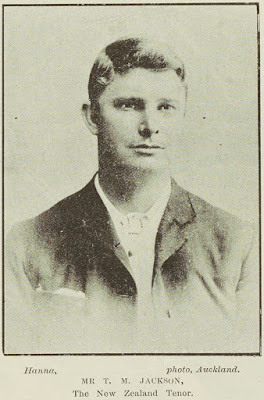 Blanche Murray -- this must be Blanche, daughter of 'Gaston Murray'. In other words, Blanche Mary Wilson x 31 October 1866). Mezzo-soprano. Once of the Children's HMS Pinafore (1880), RAM, Llewellyn Thomas Gold Medal, Westmoreland Scholarship, Carina, the D'Oyly Carte, the German Reed Entertainment ('pleasant voice and unaffected style'). As late as 1910, I see her on the halls in the sketch Charles, his Friend, with brother-in-law Courtice Pounds.

John [William] Josey (b Shepherd's Bush 25 February 1866). Baritone, son of an engraver, followed his father's trade before joining Gladys Heathcote's little La Mascotte company (1889). During the 1890s he was seen sporadically in such venues as Portsmouth's Clarence Pier, at Derby, or the Tynemouth Palace before joining the Singers. I see him singing at the Nottingham Empire in 1906 (with Charles Butler), after which his did the macho midlife thing, abandoned his wife and four children, and swanned off to California as 'Jose Robinson'. He seems to have worked as a perambulant singing teacher for a bit, by 1930 he was working in 'dental supplies' and in 1945 he was 'clerk'. Wife Grace Margaret née Dormain died in 1928, 'Jose' appears to have returned to Britain after the second world war, and the family historians have credited him with someone's else's death ..

Albert [Grafton] Pearce (b Birmingham 1 October 1869; d Weston-super-Mare 10 March 1946). Tenor, son of a gold/silversmith, at the age of 21 declared his occupation as 'operatic prompter'. In the mid-1890s he became a regular in the Portsmouth concerts, and joined up with a little party, At Home, run by J M Gordon, singing tenorious ballads and playing such operettas as After All and Mock Turtles, mostly alongisde a violinist by name Ada Cleveland. She may or may not have been the Agnes Tibbey he wed in 1900. Almost all his work was on the piers and in the small concerts of southern England, so I was surprised to find him billed as 'of the Royal English Opera House'. So I looked up David Stone's lists ... and there is his father! Joseph Knight Pearce obviously supplemented his jewellery income by singing in the chorus as the Savoy between 1881-1892! Maybe that explains Albert getting away with After All and Mock Turtles!
Whatever young Albert did at the EOH, it was pretty invisible (prompter again?), and he was soon back Portsmouth Town Hall and at Southend Pier, performing At Home (including an operetta by Ada), until he was hired by Fred Dale. He sang with the Singers company between 1899 and 1903, then moved to the Henri Goddard party (the other male singer was the unrisen T Thorpe Bates!) and then ... well, by 1906 he had quit the piers, and taken to the music-halls in a double act with 'Clarissa Talbot'. 'Clarissa' was Mrs Clara Alice Taylor née Talbot, and after Agnes's death (1913), she would become Mrs Pearce (1918). The couple gave musical scenas with such familiar titles as The Spider and the Fly, Over the Garden Wall, A Winsome Wooing and 'Japanese musical dialogues and song scenas' on the Stoll and Tivoli circuits for a number of years, before they retired and Albert became a 'café proprietor'.
Posted by GEROLSTEIN at 7:40 PM