Clarkes of the world unite. Your family is being torn apart on e-bay!

I always find it unutterably sad when 'dealers' get a Victorian family photo album, and break it up to sell the photos (named or unnamed) piecemeal. I suppose it is more profitable for them that way, but it shows a horrid disregard for history, for family, for the meaning of a photograph. Over the last few days I have watched one family emerging from the stock of one of the usual such history-destroyers. I wonder how many, singly, she will sell. I will try to group the recognisable ones here, and maybe (as has happened in so many cases, after I have blogged) family, or people to whom the people and pictures mean something, will find them. The one which first caught my eyes was this fine lady. Ada in 1875. But someone has kindly pencilled 'Mrs Worthington' on the back ... 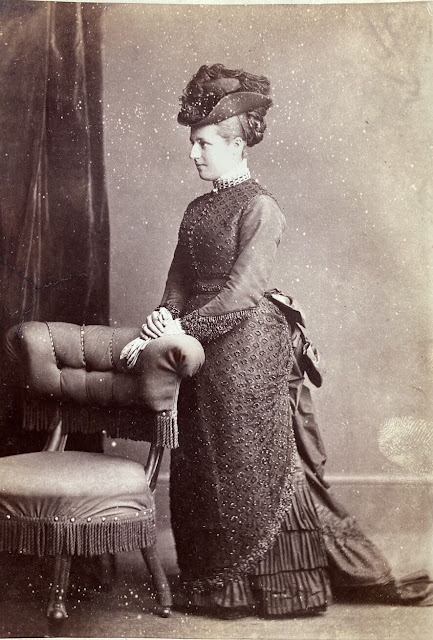 Yes, here she is. Ada Louisa Clarke daughter of John Andrew Clarke (1819-1882) and Louisa née Moon, born Warwick Villas, Harrow Road, 1854. Married Arthur Bayley Worthington 1879. OK, well Miss Moon just happened to be the daughter of a Lord Mayor of London. And a printer and publisher when he wasn't being civic. Mr Worthington was a corn-merchant, then brewer, the gentleman. The Worthingtons had two children, Lionel Bayley W (b 1879) and Nora (23 August 1883). Lionel was a mining engineer and went out to Burma where he died at the age of 35. Ada, alas, was already gone. She died 23 December 1890.

Being familiar with dismembered family albums, I next searched for husband and children. And yes, here is baby Nora Mary Bayley Worthington ... 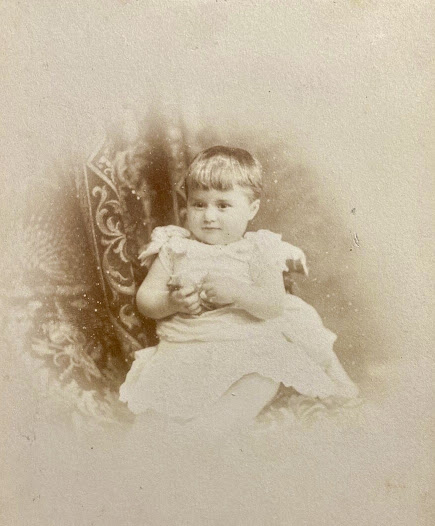 Nora was MBE'd in 1918 for her work in the Volunteer Aid Detachment during the war.
Well, let's see what else is here. I don't see any Worthingtons. Ah! The internet is helpful. Here is Arthur's brother 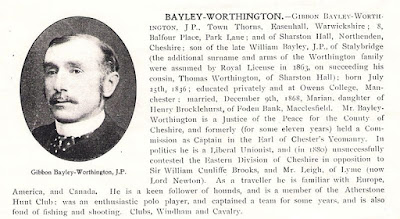 And a fine article about them all. https://www.townthorns.co.uk/the-bayley-worthingtons. Slightly odd, though. Mr B-W (hyphenated) had a daughter, Sybil. This site tells us she married in 1898. Actually she hit the headlines in 1898 by shooting herself 'in Park Lane'.
No more Worthington photos, though. A few Clarkes. And Clarks, as well. Are they connected, then? Let's have a look.
Jane Clarke. Same lady? One is dated 1877. 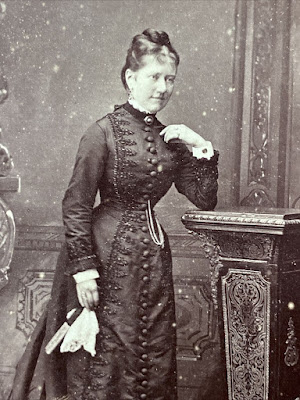 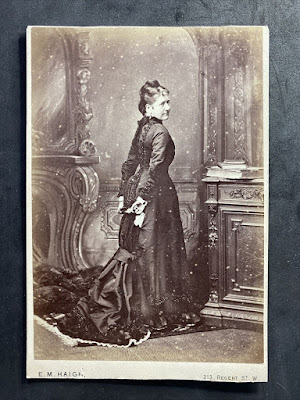 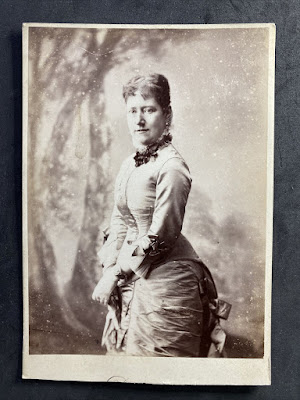 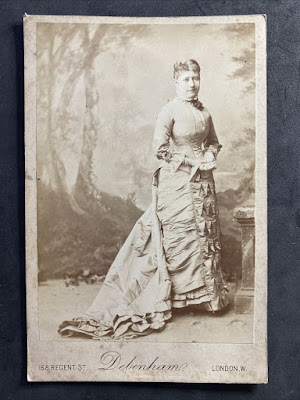 Now, where does she fit in?
Robert Clarke? Ah! I suspect that this is Ada's grandfather. The non-conformist silk mercer. With a wife named ... Jane! 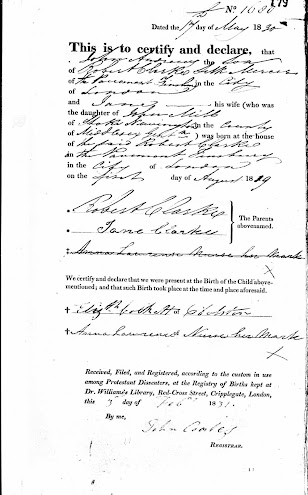 This looks like them ..   Well, Ada is but 21 in her smart photo, could this youngish looking lady be her grandmother? And this her grandfather? 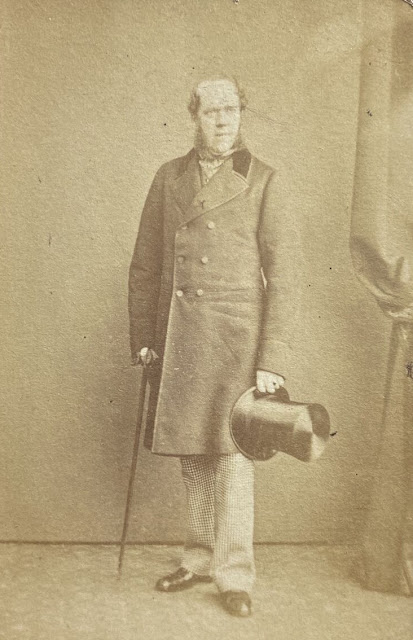 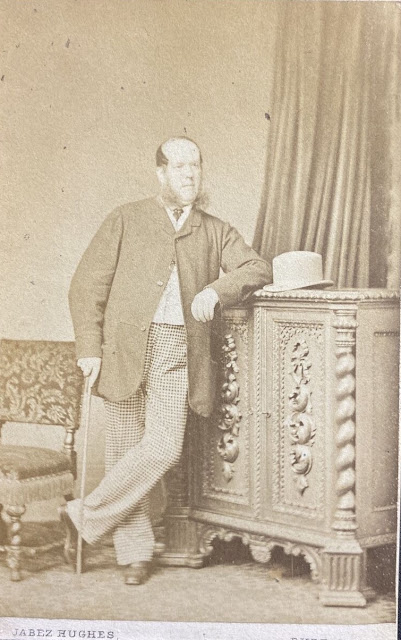 THIS one is supposed to be 'Mrs R Clarke' 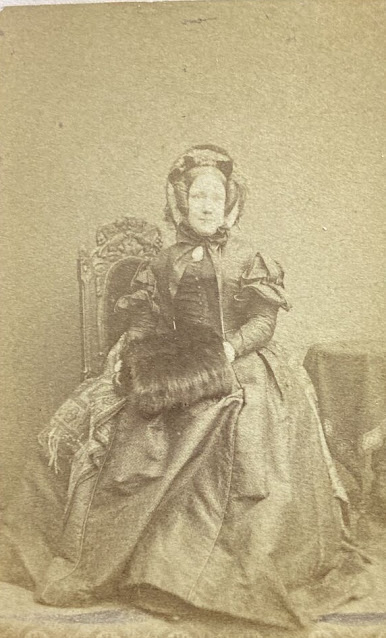 Oh, this one is eeeeeeeasy. Another grandmother! "Lady Moon" Sounds like a Paul Rubens song!. The Lady Mayoress. You can see where Ada got her looks! 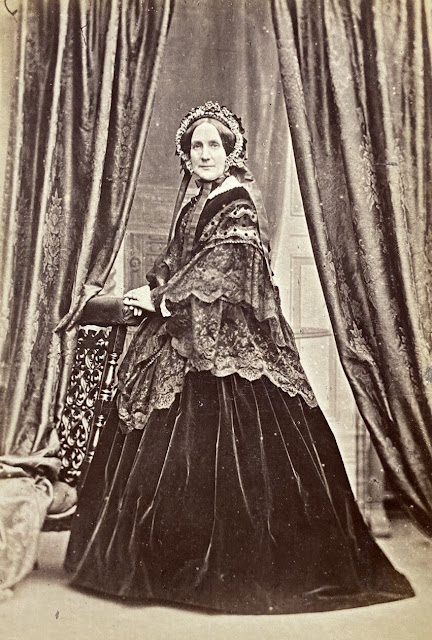 I wonder if there are more Clarkes to come. Probably not, as John-Andrew and Louisa only had two children, Ada, and a John Francis, who became an accountant in Stepney and seems to died aged 79 in 1926. He appears to have married a widowed laundry-lady and acquired two step-children .. He also (or someone else) seems to have been a bit cavalier about his 'e', which is why I snapped up a few Clark pictures amongst the 'Clarkes'.
These sweet young things, for example: 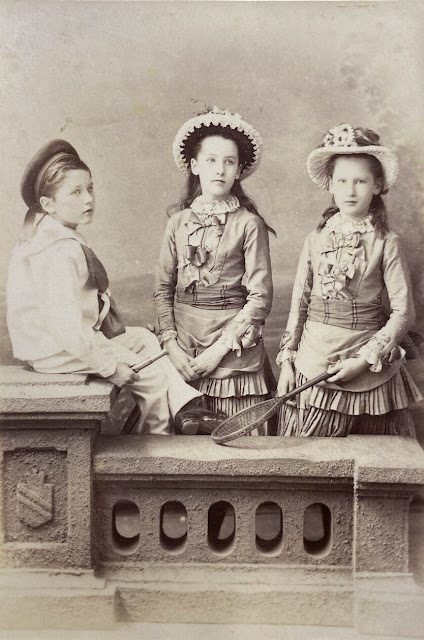 The label says Eveline, Edward and Dora. No surname. I took a punt, typed in Clark, and bingo. Three of the thirteen offspring of Mr Edward Clark (no 'e') and his wife Adeline Mary née Scott. Daddy was a stockbroker, so I guess mummy had someone to iron all those frills and bows! Ah yes. Eardly House, Beckenham, three servants ...
Left to right: Edward George Urling Clarke (1876-1951), first son -- after seven daughters ...
Eveline Louise Clark 1873-1914 (Mrs Graham)
Dora Septima Clark (1875-1957) (Lady Rees-Davies)
Oh and look. Another cdv with no surname but Adeline Maud and Ethel Mary? And the first two Clark sisters were ... bingo! 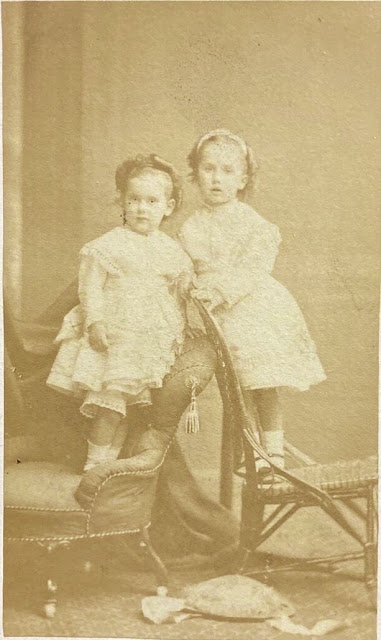 And finally, this, still from the same vendor, labelled great-great-grandfathter: John Clark. I don't think I'm even getting into that. 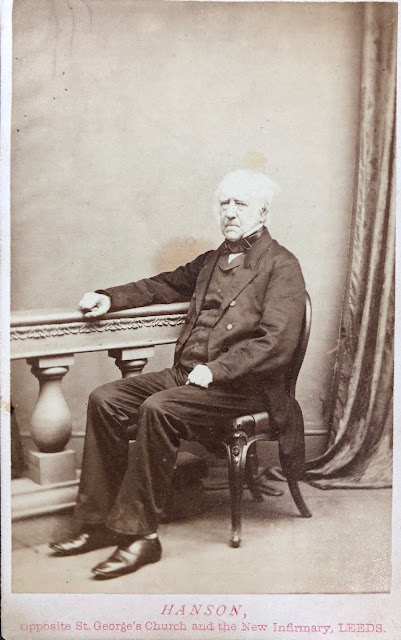 I would, but therein lies the 'dealer' peril. We don't know whether these photo come from the same abum or collection, or auction lot ...
Someone obviously doesn't mind. I see several of the photos above already have a bid on them. I don't suppose its family, or they would have bought the lot. Shame. Hello, Clarkes and Clarks of the world .. get in quickly. The family honour is at steak.
Hang on. Who is this? William Clarke? I don't have a William ... 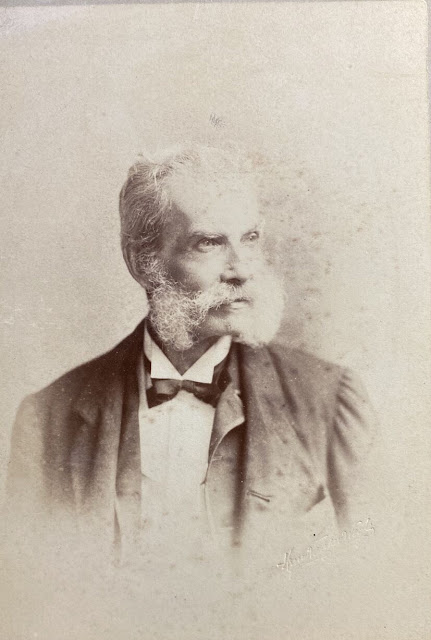