"She played the violin ...." or, a fascinating fiddler for Hervé and Offenbach


.
Vernet was a very familiar name in the nineteenth-century French theatre. Well-known actors and actresses, designers, singers … from the artist Horace Vernet to the famous comedian Charles Edmée Vernet, by way of Casimir, Thérèse (Mme Rodriquez) otherwise ‘Madame Albert’, her sister Rosalie (‘Mme Lecomte’), Victor, Madame, the three sisters Vernet of the Palais Royal and the Variétés, to Mdlle Léontine Vernet danseuse at the Opéra, Mlle Vernet star dancer of the Gaîté, Mdlle Nancy Vernet, Vernet the dugazon of New Orleans … so when I see a photo labelled ‘Mdlle Vernet’ what do I think? Well, I think youpi! It’s the Mdlle Vernet who created the role of Fleurette in Meilhac, Halévy and Offenbach’s triumphant Barbe-bleue, and of whom I know absolutely nothing more. Maybe now was the time to find out. 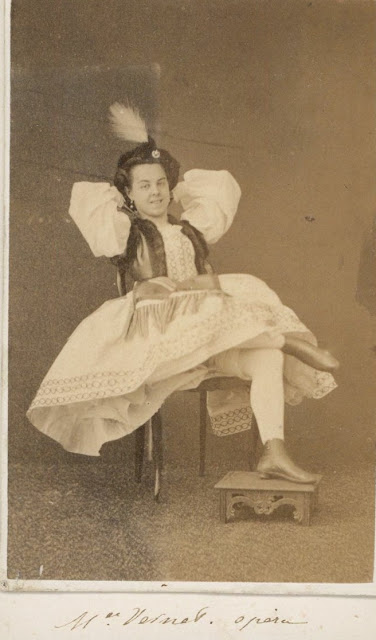 But, hang on. The photo is inscribed ‘Mdlle Vernet’ ‘opéra’. Is that opéra as in genre or as in theatre? Better look further. Into the French photo archives. Mdlle Vernet of the Odéon? Clearly a different lady. Ah! Georgette Vernet, dancer and violinist. Thanks. The physiognomy looks the same … but dancer? Well, here are the photos, labelled thus by the Paris museums. 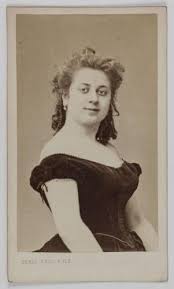 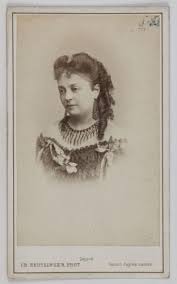 Then I went fact-finding, for alas! nobody seems to have devoted even a small biographical note to this lady, who shone alongside Hortense Schneider, Léa Silly, Dupuis, Paul Hittemans, Hervé et al for half-a-dozen years on the Paris stage and, as we can see, spawned a professional beauty’s quantity of photograph cards.

Well, I’m pretty sure she was in no way related to the comic Charles ‘of the Variétés’, or the artistic Hector, but she was indeed related to the tenor-turned-theatre manager, Casimir Vernet, sometime of Geneva, Bordeaux, Nîmes, Montpellier. She was one of his three theatrical daughters. Marie seems to have been the eldest, Anna the second, and Georgette by some way the youngest. I would estimate that she was born circa 1845. I see the two elder girls in 1857 at Toulouse and 1858 in Le Havre, before they join the company at the Palais-Royal in a modest capacity. Here they are in decorative roles in Le Fils de la Belle Dormante, playing strawberries. They appeared at Strasbourg, and in 1860 at Baden, and at their Benefit they introduced little sister (‘fifteen years old’) in two brief showpieces Il n’y a pas d’enfants and Les enfants terribles. 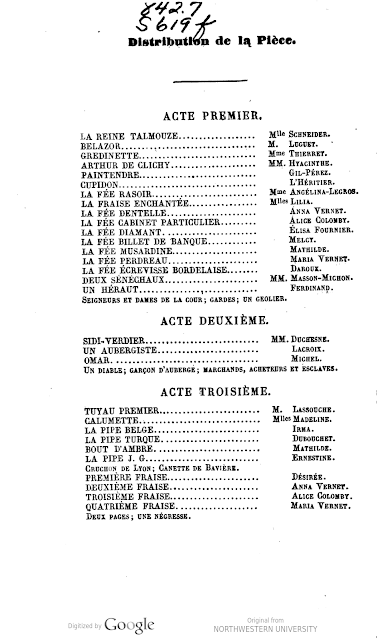 Georgette had initially been trained as a violinist, but had turned out to be much more than that: ‘elle chante le couplet à ravir, joue du violin et piano, fume, fait des armes, et par dessus est jolie comme une ange’. The following year, Georgette followed her sisters to Lyon where (‘excessivement jeune’) she appeared in boys’ roles, playing multiple parts in one of those pieces designed to show off versatility, at the Théâtre des Célestins and provoking comparisons with the travesty-player supreme, Déjazet.

She was still a teenager when she was hired for the Théâtre des Variétés to appear in La Liberté des Théâtres, a Cogniard/Clairville ‘pièce’ seeking to repeat the success of the interesting Les Folies Dramatiques. Hervé again provided the music for the show, as he had for his first full-scale show, and in a featured scene he played an enraged musician opposite the ‘jeune et gracieuse’ Georgette and her violin. She stopped the show with her Violon enchanté. ‘What can we send Lyon in exchange’ joked one paper. [She has] a name which cannot fail to being her success at the Variétés’, smiled another. She followed up in Hervé’s operetta Une Fantasia (role of Nefissa), and the Variétés then mounted a special vehicle for her talents. Déjazet had appeared in a compilation under the title Lully ou les petits violons du roi, where a feature of the title-role was a virtuoso violin performance. Played, of course, from the wings. Georgette Vernet had no need of such aid: she played her own violin, as well as acting and singing to equal her illustrious predecessor, and again stopped the show. 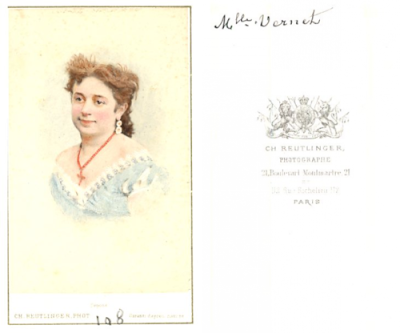 If those multi-talented performances were perhaps her most exceptional, she was however a member of the troupe at the Variétés, and the new Offenbach opéra-bouffe, Barbe-bleue, unlike Orphée aux enfers, had no violin-playing character. Especially not a 20 year-old girl. But Georgette was a multi-talent, and she was cast in the role of the little princess Fleurette. She filled it delightfully (‘sympathique au possible’), and that credit is the reason for her entry, even if just as a name, in theatrical history. 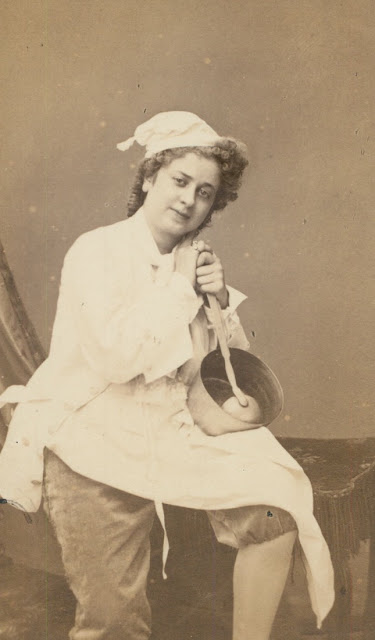 She remained at the Variétés thereafter, succeeding Elise Garait as Wanda in La Grande-Duchesse and Silly elsewhere, she was featured as la Reine Caroline in a revival of Le Royaume des Femmes (‘Last Rose of Summer’, songs by Poïse and Lindheim), and got out the violin again for the spectacle Les Thugs à Paris where she played a mechanical doll and attracted the smarty-pants comment ‘Mlle Vernet joue toujours le violin. Est-ce qu’elle ne pourrait pas jouer un peu le trombone’ from a Parisian journo who fancied his ‘ésprit’. He would doubtless have been pleased that, in La Comédie bourgeoise, she played the piano.
In 1868, when she played in Les Noces de Merluchet, it was hinted that she was putting on the kilos, but when she crossed to the Menus-Plaisirs for the Figaro-Revue (in which she played five parts) she was still referred to as ‘jeune et jolie’. I think we can see the progress in our photos.

Georgette died in January 1871. It was said that she had had a nervous breakdown, worrying about her father in Strasbourg in the Franco-Prussian War. What about her mother? Her sisters? Well, whatever she died of, and why at such a young age, we will probably never know. Her death notice claimed she was 22. I think not. That would have made her 11 in Baden, and 15 at the Variétés. Not impossible, but … Another newspaper insisted that she had been married to Edouard Hamburger (d 3 April 1886), the Alvarez of Barbe-bleue in 1866. Not impossible, but unlikely, as he was of staunchly Jewish race and religion …

Well, anyway we know THIS photo is she! 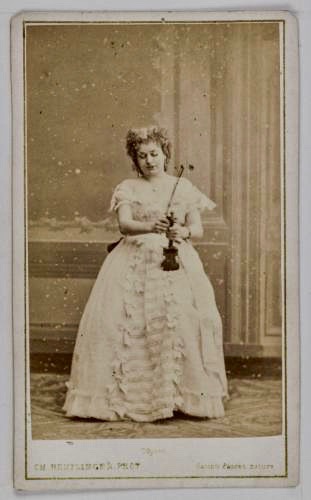