Sarolta, or the Sultan's Soprano Supper

.
The singer who called herself 'Mademoiselle Sarolta' is one of the hundred C19th performers whom I chose to include in my volume, Victorian Vocalists.

And, yes, the bit about the Khedive and the naked lady served up for supper was reported as being true. 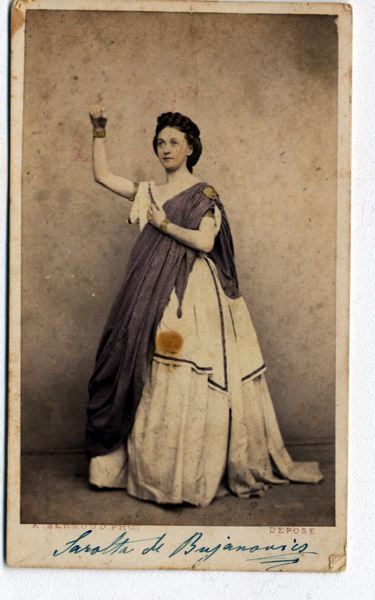 Now, because my hundred biographies were, as is my wont, pretty substantial, there was little room in the book for photos. Only thirty-three of the articles were illustrated. Sad, but the book was rather large enough already. But I really should have included a picture of Sarolta. 'La belle Sarolta'. After all, her fabled beauty was an important part of her appeal. But the only (signed?) photo I had wasn't particularly glamorous ..

However, this morning's minesweep threw up a prettier one, so here's the chapter on Sarolta from the book, this time illustrated. Any further sightings gratefully received... she wasn't easy to worm out!

Hungarian soprano and much-touted beauty of the era, who had a fifteen-year career, in many of the major European capitals, as a prima donna in Italian opera.

When ‘Sarolta’ came out of Hungary in the 1850s, young, beautiful, ‘of the noblesse’ and talented enough … the newspapers were clearly going to have a field day. And they did. Everyone wanted a Sarolta story, and though, amazingly, some of the tales they colported weren’t that far from the truth, they were far enough off track to leave a bit of a muddle in the lady’s history. Well, to start with, you couldn’t expect a C19th gossip columnist and his typesetter to get ‘Bujanovics de Aggtelek’ (in France) or Bujanovics von Aggtelek (in Germany) right. And even though she was only twenty years old when she made her debut, at the Paris Italiens, no less, the press couldn’t resist making her ‘not yet eighteen’. One paper claimed it was ‘her eighteenth birthday’. The debut was 27 January 1859. Sarolta had been baptised on 26 January 1839.

She was nervous. But the audience was won by her youth and beauty and the critic summed up ‘il y a beaucoup plus à louer qu’à blâmer’.

The debut, however, was not followed up, and Sarolta was next seen in public in London, a few months later. She made her second debut as Violetta in La Traviata (10 May 1859), at Drury Lane, with Ludovico Graziani and Badiali, and the reaction was much the same as it had been in Paris. The role was a touch more suitable than Leonora had been, and chosen with obvious reference to her physique, but, if she were a little overweighted, she again won the audience over largely with her charms and her acting. She was promptly engaged for a handful of the season’s most fashionable concerts (Mme Puzzi, Benedict, Mrs Anderson &c).

Her next stop seems to have been the Italian Opera of Madrid, where she played two seasons with considerable success, but negotiations for impresario Bagier and she to take on the management of Her Majesty’s Theatre, London, fell through. She moved on to the San Carlo of Naples (where she sang Isabelle to the Alice of Titiens in Roberto il diavolo) and then back to the Paris Italiens, before, in 1865, she again was engaged for London. 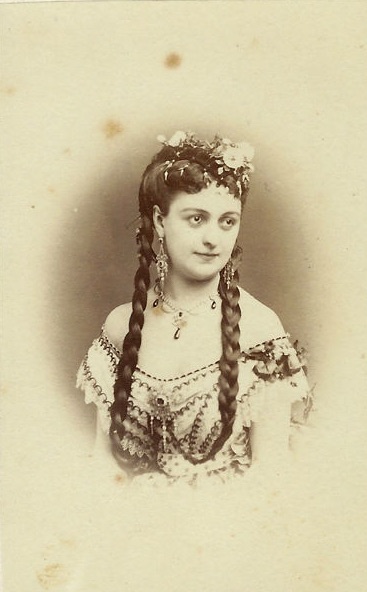 She appeared first at Madame Puzzi’s concert (29 May) singing the Gounod ‘Ave Maria’ and the press smiled: ‘she is as attractive looking as ever but does not seem to have improved her singing’. But the public didn’t agree. And the lofty Philharmonic Society hired her for one of their concerts (10 July). Her operatic engagement began five days later, with the season’s first performance of Un Ballo in maschera (15 July). Sarolta was cast as Oscar, alongside Harriers-Wippern, Trebelli, Stanley and Carrion, and was, this time, liked by both public and critics. She followed up as Susanna to the Countess of Titiens in Le Nozze di Figaro, Siebel in Faust, and repeated her Traviata, as well as appearing frequently in the Crystal Palace Operatic Concerts (Jewel Song, ‘Crudel perche’ with Santley, Rigoletto duet with Stagno). When the company went to the country after the London season, Titiens, Sinico and Sarolta led the soprano team, and she added Gilda in Rigoletto, opposite Mario, and Zerlina in Don Giovanni to her roles. ‘A bewitching little creature … a voice of exquisite sweetness’ cried one smitten critic.

There was a brief return to Her Majesty’s Theatre, more concerts at the Crystal Palace (Jewel Song, ‘I dreamt I dwelt in Marble Halls’, ‘Caro Nome’, ‘Zuleika’, ‘Vedrai carino’, ‘Ave Maria’, duets with Santley), concert visits to Liverpool with Gardoni and Deméric-Lablache, Brighton with half the opera company, and to the Halle concerts in Manchester, and a series with Arditi at Her Majesty’s Theatre, before Sarolta moved back across the channel to her next engagement, in Brussels. The opera company at the Salle de Cirque, under the management of one Gatti, and featuring her (‘die hübsche Soubrette’) and England's Elena Kenneth alongside Cresci, Pancani and Mlle Sylvia turned out to be a mistake. Gatti quickly disappeared, and the singers ended up playing as a co-operative.

In May, she was back in Paris, in August at Baden, and then with the Lorini Italian opera at the Viktoria-Theater in Berlin (Leonora in Il Trovatore), where she attracted, not only the attention of opera-goers, but also of the King of Prussia. She was summoned to a concert at his court. Lorini lead his company to Copenhagen, in March-May 1867, where the young prima donna scored in Don Pasquale, La Traviata, Rigoletto with Padilla, Il Trovatore, Ernani and now as Amelia, rather than Oscar, in Ballo in maschera.

In August, she was back in Britain, as the main attraction at John Russell’s Covent Garden proms, billed as ‘of the Italiens, La Scala, and the Grand Opera House, Berlin’. A slight exaggeration. And the results were the same as ever. The public adored her and the press smiled: ‘she may not be a great singer, but she is one of the prettiest tyrants that ever trod upon the neck of the British public’. 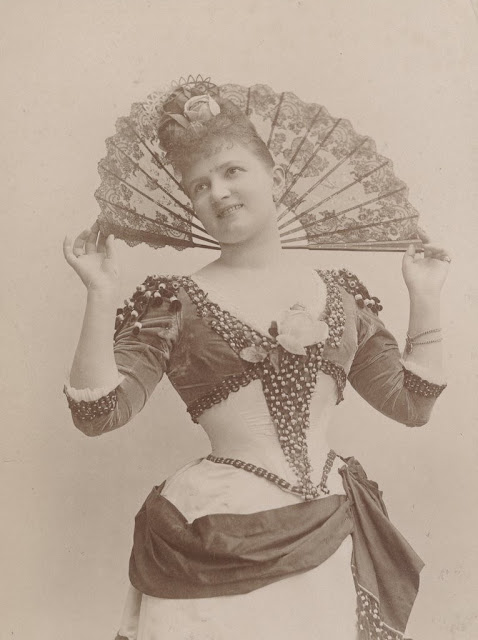 From Britain, it was back to Berlin and the Viktoria-Theater (3 October 1867), whence she had been recalled by one Bernardo Pollini, to star in the new season of Italian opera (Oscar in Un ballo in maschera), alongside Signora Rosa Pollini, Kate Morensi, Armandi and Signor Marchisio. The Pollinis proved a disaster, flitted, and Signora Sarolta took over the management. She got the proposed production of Crispino e la comare on, in December I see her raising ‘sturmische Applaus’ in concert, and in January they played I Puritani and then Don Pasquale, but Sarolta hit her biggest headlines when, at a Charity Concert, she got up and sang Thérésa’s popular and thoroughly ‘indecent’ ‘Rien n’est sacré pour un sapeur’.

The troupe followed Berlin with Hamburg and Stettin and I next catch up with our prima donna at Moscow, in December 1868, scoring a tremendous success as Zerlina, at Warsaw...

Following the lady from here on becomes a little more complicated. Because, now, a second Mlle Sarolta appears on the scene. To be, eventually, followed by a third. Both in the Parisian opera world. And the press of the time, and afterwards, got a bit mixed up. Or just didn’t say which was which.

Sarolta-Acs married the baritone Jules-Celestin Devoyod, and retired from the stage, but when she died, 24 February 1884, ‘death of Mme Sarolta’ was announced.

However, we do know for certain that it was our Sarolta who was engaged for the Khedive’s Opera House in Cairo in 1869. I see her singing La Traviata with Naudin and Méphisto in Le Petit Faust ‘by special wish of the viceroy’… and I have also lit upon a tale of a special supper at which ‘die schöne Sarolta’ was said to have been served up, naked, to the Khedive’s guests as dessert. A book entitled Vom arme egyptische Mann, published in 1870, goes further, and tells tales of courtly intrigues … There were rumours too of a ‘relationship’. But, by 1871, she was back in Paris.

I am pretty certain it is our Sarolta at Brussels in 1872, in concert in Paris in 1873 and perhaps in Avignon. And then came the news that Mlle Sarolta was to wed a Polish count and retire. The wedding happened all right, but the papers had got their bride-spotting muddled. The new Countess Witold Mniewski was a Miss Hildegarda de Bujanovics de Aggtelek. One columnist, a little more careful than the rest, claimed that Hildegarda was Sarolta’s sister. Probably. Anyhow, it wasn’t Sarolta. And a few months later Sarolta (with her ‘de Bujanovics’ tacked back on) was announced for the newest Bagier opera company. The announcement appears to have had no follow up, and now Sarolta just simply disappears from my view …

And then, in 1886, the third Mlle Sarolta surfaces, ‘pupil of Madame Artôt-Padilla’, ‘a young Viennese’ who some said was actually a Fräulein Hoffman. The press mused: ‘Ce nom de Sarolta nous rappelle une autre cantatrice, hongroise également et fort jolie aussi, qui eût jadis beaucoup de succès au Thêatre-Italien, quelques années avant la guerre. Cette nouvelle Sarolta ne serait-elle pas la fille de la précédente?’. Well, in spite of the Padilla connection, I think, probably not. This one appeared at both the Opéra and the Opéra-Comique (La Traviata) in the 1880s, and may be the Madame Sarolta who is teaching singing, in 1893, at 32 Chaussée d’Antin. Or maybe not.

So where is our Sarolta? Still in Egypt? Being chummy with the Khedive? Well, she does surface, finally, in 1898. On 12 January. Getting married. The bridegroom is the widowed Marquis Pierre Louis Marie Gautier de Saint Paulet (b Carpentras 5 July 1841; d Paris 29 May 1906), a member of a noble family centred on Carpentras, who had been a witness at the second marriage of Hildegarda, Countess Mniewska, to the writer Kazimierz Waliszewski, the previous year. So it seems that the two women were related, after all.
And there, finally, with at least some of its knots untied, the tale of Sarolta Bujanovics fizzles out. There are many more tales, I am sure, of the beautiful singer and her vocal and amorous adventures … I notice she gets a mention in the biography of that serial sex maniac The Tempestuous Prince: Hermann Pückler-Muskau … but, amazingly, no one seems to have remarked her death. The Almanach de Gotha really has a lot of tidying up to do.