HMS Pinafore in short skirts ... only in the USA! 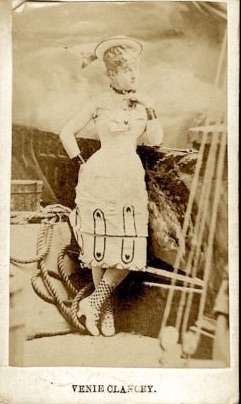 .
Today’s photo from my wanderings in the music-theatre past was a bit of a surprise. It looked like a cheap, maybe pirate photo, from the 1870s, and the name of the lady who I have always known as ‘Venie Clancy’ is spelled ‘Clancey’. And what? As Josephine? In HMS Pinafore? Surely not! I don’t think Messrs Sullivan and Gilbert would have passed that mini-dress costume! 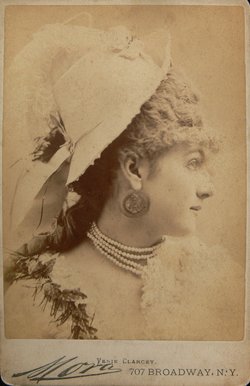 Venie Clancy was a very pretty burlesque actress, who started in theatrical life as a dancer with Alice Oates’s well-known comic opera troupe. She very quickly transmuted into a singing soubrette, and played at the Robinson Hall in the attempt there to make a killing with sexy opéra-bouffe (Chilpéric, Princesse de Trébizonde), before joining up with E E Rice’s well-known musical-theatre company. She played Evangeline and Conrad the Corsair, alongside Lizzie Webster, on the highroads of America, and was voted delightful. But it was HMS Pinafore time, and no musical company on the road could be without a version of Pinafore, so Rice put up Lizzie and Venie as Ralph and Josephine. Seemingly in a distinctly burlesquey production! He also, so scuttlebutt said, had an affair with Venie. 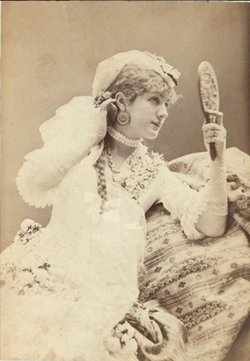 So, who was ‘Venie’ and what kind of a name is that? Well, it was an abbreviation of her birth name of Lavenia (sic). She was born Lavenia Gardiner in Cincinnati 31 August 1859, the daughter – so it seems – of Charles Randolph Gardiner (b 1833; d Milford, Del 31 December 1901) and his wife (?) Lavenia E (d Burlington, Vt 18 August 1880). The couple also produced a second daughter, Laura, who was to become equally as liked as a pretty actress as her older sister under the name of Laura Clancy. 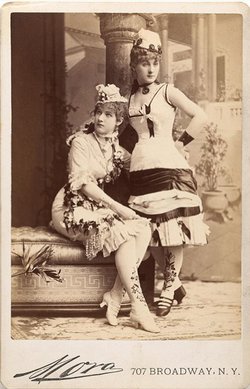 Clancy? Why Clancy? Because Charles and Lavenia didn’t stick together, and in 1870 Lavenia married (23 February) a salesman by the name of John J Clanc(e)y. They can be seen in Chicago in that year with Vinie (sic) and Laura who are still bearing the name Gardiner.
Mr Gardiner went into theatre management, and hit gold with a piece named Only a Farmer’s Daughter. Mr Clanc(e)y seems to have died or disappeared fairly quickly, but he stayed round long enough that the two girls went on the stage bearing his name.

After her stint with Rice, Venie joined up with Eliza Weathersby and Nat Goodwin’s fine Froliques troupe, playing Hobbies and the like, but it was not for long. In April 1880 she seceded from the company amid gossip of pregnancy and/or marriage. 1880, of course, is census year, and we spy mother and the two daughters boarding in Charlotte, Vermont. Accompanied by a René Deschamps from France. The census has clearly been completed by a nitwit. All the family is said to be French, and 36 year-old René is listed as being 15. Under occupation, all seem to be listed as ‘Jewish’.

Well, Mons Descamps, a ‘merchant’ is the man. Venie became Mrs Descamps and went to live at Oak Glen Cottage at Nordhoff in Ventura County. And the hecatomb began…

Mother Lavinia died after a stroke ‘aged 40 years 8 months and 7 days’ 18 August 1880. Venie died at Nordhoff 1 March 1882, I suspect in childbirth, and Laura who had taken to spiritualism latterly died in Baltimore 10 November 1884.
These photos are all that remain of the little family.
Posted by GEROLSTEIN at 3:36 PM