Roofless at Dawn .. Naked at Dusk

OK. Where did we leave this story? Oh, way back! So the roofers are in. You knew I was having the house re-roofed ..
And the hay on the ground.
The bathroom in limbo, though operative..
The drive? Well, it was supposed to have been done last week, but no-one has turned up. This is New Zealand. 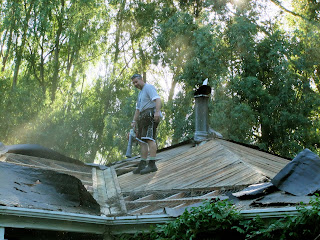 So early this morning, I was de-roofed. I was a little nervous, as the weather forecast was for thunder, lightning and hail. I was even more nervous about the hay, which had already been drizzled on, but then saved by two days of heat and wind.
Cees the Dutch roofer didn’t seem worried. It won’t rain, he said positively. It will rain said the TV and the meteo-computer…
It seemed Cees was going to be right. As we all laboured away – me digging up a tree and creating a vegie garden in nowt but stubbies and a kepi, Wendy doing horses and gardens, the lads building my nice new green roof, and Papa Tull turning and baling the hay – the sun sweltered down on us. ‘It’s pissing down on Rolleston’ came the news about 3pm. But not at Sefton! 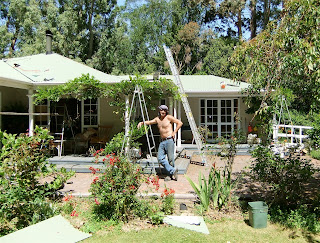 Soon, the roof was done (double click on Cees for full-sized picture!), and the paddocks proudly boasted 57 big square bales of hay – a record! we’ve never had much more than 40 before! – and the rumbles suddenly got closer.. the sun vanished, a cold wind blew up .. and next thing, as the roofers rumbled off into the dusk, Wendy (who had at least the sense to grab a woolly) and I, still just in keks and kepi!, were tearing round the paddocks with old horse coats, trying to cover at least some of the hay.. 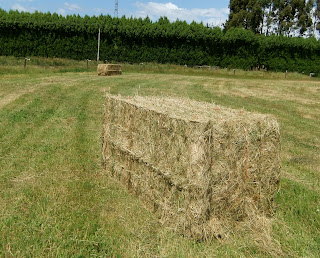 Then, as the rain paused (was the predicted torrent of hail going to come?), and I headed soddenly for the blissful balm of my lovely new hot shower, Neil the hayman rumbled up in his big red tractor. And before we’d finished the second bottle of bubbly, there was hay in the barn!

But good luck isn’t endless. With just a few bales to go .. the big red tractor blew a tyre..

Now its 6.30am Tuesday. The big red tractor sits forlornly in the paddock waiting for 9am and a new (very large) tyre, the last four bales of hay, draped in the horse-coats once sported by Flying Chev and other dear departed pals, sit grotesquely in the front paddock .. the roofer lads are coming soon to do their finishing touches .. and later the bathroom/bedroom boys to rip down my bedroom ceiling and perform various other delights..
I shall shut my study door and shrink into the nineteenth century ..
Because outside – even though the hail never came – it is (contrary to the forecast) cold and drizzling. This is New Zealand. In the Summer.
I'm booked for a trip to sunny Australia in a few weeks time... 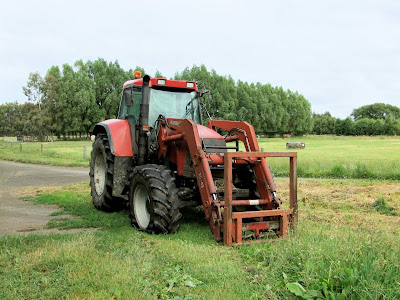