Beauty Is and Beauty Does 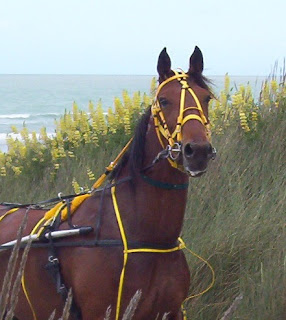 The saga of the lovely Elena de Gerolstein, the tale of her growing into a racehorse and the head-scratching she has put us through, trying to get her to behave on the track in a manner conducive to a good performance, has been a long one.
But today it moved on a stage. As you may remember, Elena started off her career in trials enthusiastically, winning first a learners’ heat, and then a heat for unqualified horses, before – as the grade climbed a little, and the races became faster -- she started to show that annoying tendency to ‘race greenly’. Wendy tried kitting her out in various combinations of gear in order to correct her unhelpful propensities, but nothing seemed to solve the problem … until today.
Today, we put away the boring pole, we put away the Murphy blind, and we equipped her instead with a simple pair of half-blinkers. Hopefully, thus, she would concentrate on what was in front of her instead of at her side or behind! And the result was that the only thing in front of her was air.
A nine horse maiden field, including one unraced one whispered as being something special and others who had been already placed at the races. Elena drew three at the barrier, perfect for her, and in spite of doing her corkscrew-neck trick in the preliminary, she went away quickly and won a little battle for the front. And away she strode, with the entire field splayed out in Indian file behind her. Coming up to the home turn, the Indian file concertina-ed, as those with ambition pulled out to prepare their attacks, but round the bend, the one that attacked was Elena, who popped smartly three lengths clear.. and put her head down. The Something Special and the most experienced of the maidens tried to bomb her in the final hundred metres, but Elena wasn’t having it and she held on to win a half-head and a head in a three horse finish.
The time for the 2000 metres was a fair 2.34 (a kilometre rate of 1.17) with final 800 metres in 58.9 and final 400 metres in 28.9. Thoroughly respectable times -- especially in a very strong sidewind which, as leader, she had in her face all the way -- which are not far off those needed to win many a maiden race on raceday.
So Elena has added a ‘non-winners’ heat to her previous workout wins and that leaves only one more step .. she needs to do the deed on raceday.
Today has given us confidence that she should do something like that before too long. Of course, it would help if she drew three again, and if she were able to lead (which she clearly likes), but many a raceday field over the coming months will be weaker than what she beat today, so…
Watch this space!

Wonderful... bet your heart was beating a bit faster than usual... keep taking the tablets!