Tyacke-y times ... a family investigated, or Mr Livingston, I presume

It is simply too hot and sticky, and life is too covidly complex right now to work on anything that needs long concentration ...

So I plucked a photograph -- nay two -- from ebay and tried to bring it to life.

The reason there are two, is that they were sisters, and listed oh-so-sensibly by vendor coowlstuff as such. And they were inscribed with both maiden and married names of the ladies. Should be a doddle. Well, it wasn't! 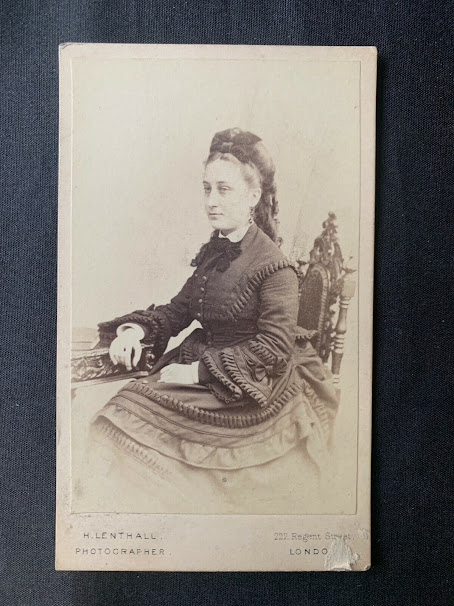 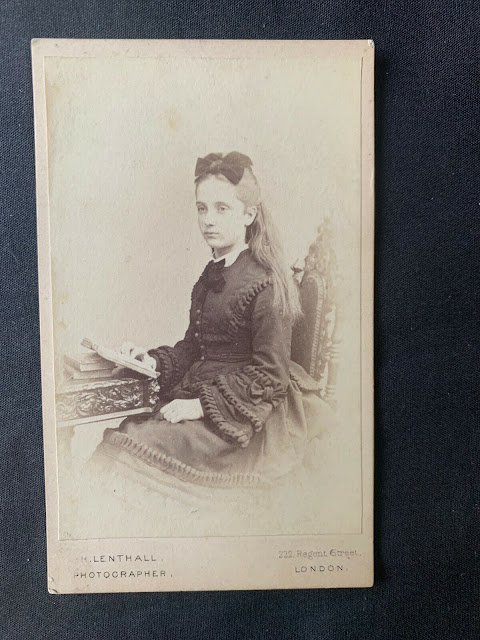 So, here are Miss Minna Elizabeth TYACKE, and her younger sister Ellen Esther TYACKE, born respectively in Marylebone (16 January 1856) and Stoke Newington (24 July 1857).
Tyacke? Hmm what sort of a name is that? It is said to be Cornish in origin, and yes I spy a bundle of Tyacks down there -- vicars, solicitors, and others less lofty.  I think our branch, which appears to be one of the 'others' type -- might have got cross-bred with a semitic strain somewhere along the line ..
Anyway, father William Andrew Tyacke was indeed born in Marazion in 1826 and I spy him in the 1841 census at Marazion aged 15. Grandfather is a timber and iron merchant a iron smelter. It seems that grandfather might have died in 1851 ... but there are a bunch of WTs around, so one can't be sure. Anyway, William Andrew married, in 1855 (19 May), Miss Rosa Goodman daughter of Abraham Goodman (Jewish, I knew ish!) of Marylebone, and we have the marriage registration ...

Well, we ignore the nonsensical 'gentleman' bit.  But the document does rise the odd question mark. First, what was W A doing in Lincolns Inn Fields. Clerking for a lawyer? Secondly I have to go in search of her father. Because an Abraham 'Goody' Goodman otherwise Levy was a well-known lowlife character -- prostitution, race-fixing, gambling houses) around London at this time ... hmm. 1841 census of Nottingham Terrace Abraham 'independent', Rosa his wife, youngest daughters Rosa and Minna: well, youre innocent till proven guilty, but Miss Rosa Goodman of Nottingham Terrace was up at the Old Bailey (1850) as 'victim' in a fraud case, and her rather odd financial transactions were gone into. The fraudulent prisoner (female) was transported for life.
Oh, Rosa was by 1850, an orphan maid, so I guess she had to financially fend for herself. And I guess 5 Nottingham terrace was hers ... so, go go, Rosa!
And if she wasn't, seemingly, related to the dreadful 'Goody' Goodman, she was a sister to 'Australia's first photographer'. You can read all about that here  George Barron Goodman: Revealing the True Identity of Australia’s First Professional Photographer,<http://coombe.id.au/research/George_Barron_Goodman.htm>
Anyway, Rosa married the 'gentleman' clerk from Cornwall, and they produced our two ladies of the cdvs in double quick time.  Later, there were two sons: William George [Stevens] Tyacke (b 2 Goldsmith Square 15 July 1861-1921) 'engineer' and Richard Andrew Tyacke (b Goldsmith Square 15 September 1863-1907) accountant, as well another daughter, Clara Matilda, who survived only few months.
Father worked his whole life as a clerk in insurance, and died 3 September 1894. Mother lived to a grand old age, dying, aged 95, on 19 February 1915.
Now the girls. They were brought up Hornsey and Prittlewell ...
Then, Minna went to work as a governess up in Durham. But a pretty grand governess. He charges were the five children of Thomas Wood, mining engineer, aged from two to eleven. But Mr Wood owned and lived at the grandiose Coxhoe Hall, and Minna had for backup a cook, housemaid, nursemaid, butler, gardener ...  I wonder how long she was there. She was there in the 1881 census. But in 1883, she married.
Her husband was Mr Robert Russell, linen and cotton manufacturer from Bangor, County Down, and the couple moved thither.  A daughter, Mabel E was born in 1884, and a son, Robert in 1894.  Mr Russell died at some stage between the 1901 and 1911 censi, and in that latter the widow Russell and her children can be seen living in Tottenham. In 1939 she is lodging at 54 Park Street, Burgess Hill. No sign of the children ..
She lived to the age of 93.  I haven't succeeded in tracking the children, so don't know if there were any mini-Minnas.
Ellen married in 1887, Mr Edward Löwenstein 'merchant, timber, matches and paper'' 'of Alsing and Co' (b Manchester 1860) son of Leo Löwenstein 'wine merchant' from Wurttemberg and his German wife Rosalie. The Löwenstein family: papa, mama and five children can be seen in Croydon in 1881. With or without their umlaut, which modern Anglophone goverments still can't master).
They, too, had two children. Eleanor May (b Norwood 2 June 1888) and Edward William Leopold (b ditto 4 March 1890), and lived comfortably at 17 South Side, Streatham Common until 1913 ...
And then they seem to vanish. Further away from Germany, I imagine.  I don't know where they went. They probably changed their names (PS THEY DID!!) ..  yet I see a British war record for Leopold 'clerk at Alsing and Co'. Affected to the Surrey Yeomanry. He seems to have done one training camp a year between 1911 and 1916 and was then discharged as 'no longer necessary'. His next-of-kin in 1916 is his mother, so it seems father -- managing director of Alsing & Co, 110 Cannon Street, London EC -- may have died (PS HE HADN'T, read on!)
I see Alsing was a Swedish company, making matches and gas mantles, exporting wood pulp .. Maybe they all went to Sweden?
Well, some of them stayed home, and died at home  ... and lie in Brompton cemetery ... 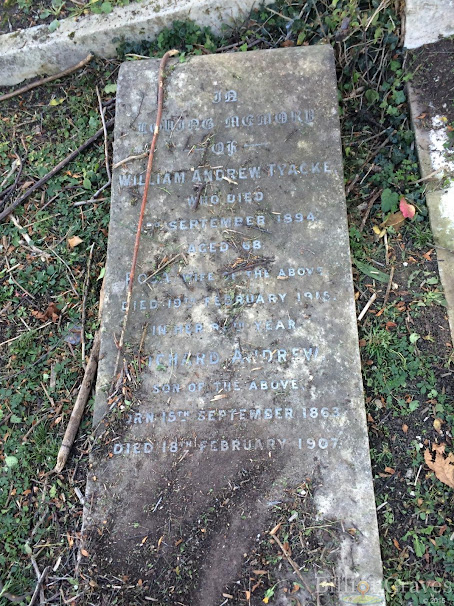 I wonder who arranged for that stone ... (is it fallen, or meant to be like that? Careful, they plough under old headstones at Brompton .. I know from experience) ... One of the girls?  Hardly likely to be William George whose sense of family came down to walking out on his wife and children to shack up with another woman on whom he laid three more children ...
Courtesy of Iain George, here are pix of our girls at younger age

I see George's daughter Elsie (b Croydon 23 July 1901) married Denis O'Neil East in 1927 ... in the 1939 listings they are living with the now widowed Lillie in Salisbury ... no children ..
Really, I hav'n't succeeded in tracing a legitimate descendant anywhere -- maybe my friends at Family Treasures Reunited can do better ...
But wait!  Eleanor May ... married George Brinkworth Massingham (1880-1854), bank clerk ... .. died Lowshells Nursing Home, Peacehaven, E Sussex 31 May 1975 ...  and there she is with her husband .. still a bank clerk in 1939 .. Powis Square, Brighton ...   I missed that completely, until I realised that Eleanor had done a name change and was calling herself 'Miss Livingston'. Daughter of Edward Lingstone ex-Löwenstein, 'war office offical' in 1915. And still at Streatham Common.

I was tossing up between a nap and a cocktail . Now I have to follow the trail ... of course, with the cocktail!
Right. Mrs Livingston, I presume. A with the first sip .. there she is!  Died in a hospital, at Brighton 30 July 1944. And still of number 17 South Side, Streatham Common. Widow. Probate To George Massingham and Edward William Livingston, accountant. Son-in-law and son. Son has dropped the Leopold.
OK widow. Here they are in 1935. Edward, Ellen, Edward jr, and  Mary Edith? ... no17 ...   Ah, Edward William's wife. Mary Edith née Swallow.
Oh! Died 14 October 1936 ... effects L37 11s 8d.  Those Alsing shares must have melted away ... and the war office?
And Edward William didnt live long after his mother. Died at Guy's Hospital 11 April 1945.  No issue.
It looks as if the Ellen branch withered ...
Enough. I leave it to you guys to decorate the branches of this tree!
Posted by GEROLSTEIN at 11:41 PM