While investigating little Mons Tousé/Touzé, my eye wandered (as it does) to other members of the cast of Cendrillon of whom I knew little or nothing ...

The original Prince Charmant (Marie Desclauzas) and Cinderella (Irma Marié) both went on to fame in the theatre, and I've written of them before ...

The original Uranie, Clarisse Miroy [MIDROY, Marguerite] (b 20 April 1820; d Neuilly 1 September 1870), has been written about extensively -- both professionally and, particularly, privately. The tales of her affair with the famous Frédéric Lemaître, whom she abandoned for the much less consequent Jenneval, has been told endlessly ...

Those other ladies ...? The sisters, Javotte and Madelon, for example.

The original Javotte was a curious Jewish lass who called herself LAURIAN[N]E. Her real name was Thérèse Angèle Brag, daughter of Beer Brag and his wife Pauline née Haas, born Paris 1 April 1851, which made her just fifteen years of age. She was fresh from the Paris Conservatoire, pupil of Beauvallet under whom she had been awarded a 1er accesit .. in tragedy!! 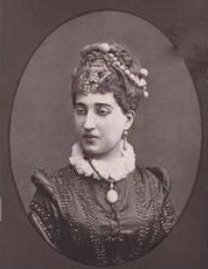 After her stint at the Châtelet she moved on to the Gaîté (Julie in Le Courrier de Lyon, Carlotta in La Dame des Roses, Mathilde de Hérouville in Le Moulin rouge), the Ambigu (Léopold Robert, Jeanne in La Vagabonde, Sylvie in Le Roi d'écoles) and in a career 'intermittent et nomade' I see her playing Le Cid in Angoulème, La Reine Margot and Zaire in Brussels, later back in Paris at the Chatelet (Alice in Le Tour de Londres, Claire-de-Boeuf in Le Chachemire vert, Amintha in Camorra), the Cluny (Marie in La Chambre ardente) and the Porte Saint-Martin .. in 1878 at Rouen .. at the Odéon (Sabine in Horace) .. 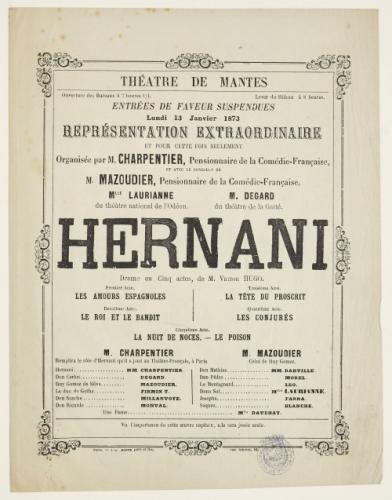 She married (16 October 1881) François Aimé Marie Louis Gervais Lasteyras and had issue.
The other sister, was played by a lass a decade older. Marie GRANDET [MOULARD, Marie] (b Lyon 21 April 1840; d Paris 27 February 1916) seems to have played figurantes at Bouffes -- unless it were another Mlle Grandet (there were several) -- until she was cast as the Fairy Queen in the spectacle Pied de mouton at the Théâtre National (1861).
She spent some time at the Théâtre des Célestins in her native Lille, but returned to Paris and the Châtelet for Cendrillon ('un perle blonde du plus vif éclat'). She deputised for Desclauzas as Prince Charmant when the star pulled out for end-of-year revue rehearsals. 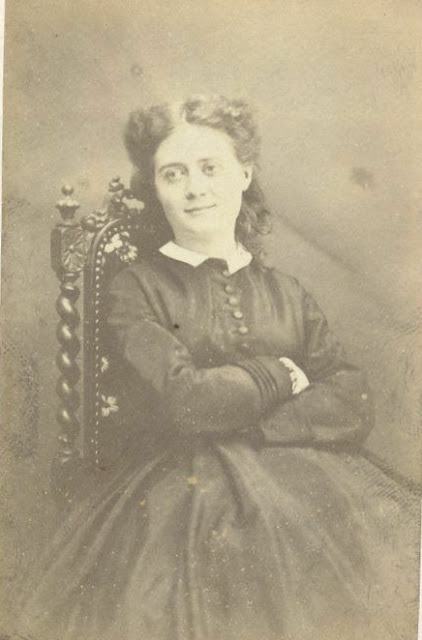 She subsequently played at the Palais Royal, the Ambigu, at the Théâtre de la Renaissance, as well as at Cairo and Odessa, and surprised the theatre world when, in 1873, she appeared in Daphis and Chloe, singing the role of Daphnis. 'Une nouvelle étoile d'opérette' excalimed those who had forgotten her days in féeries. But she still appeared in 1874 in the Renaissance production of Les Bibelots du diable with Léa Silly. In 1880 she returned to the Châtelet in Le beau Solignac. 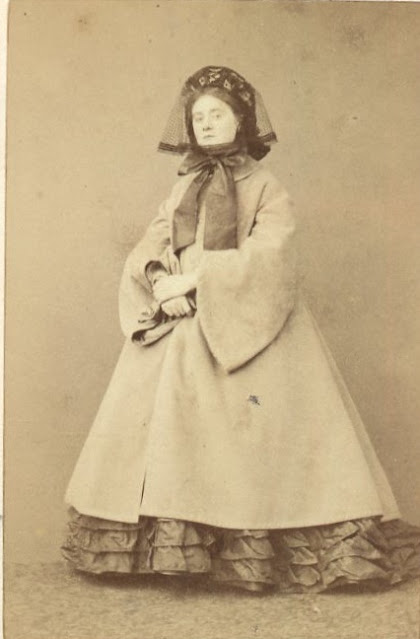 In the 1890s, she played Isabelle to the Jeanne d'arc of Sarah Bernhardt at the Porte St Martin, Oenone to the star's Phèdre, and supported her and Guitry in Gismonda, Magda et al.
Marie Grandet was still on the stage into the twentieth century, and died in Paris at the age of 65. 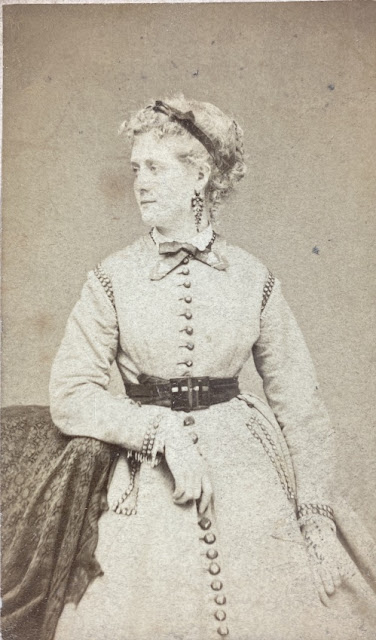 The small part of La Présidente de la Cour d'Amour was taken by a lass who called herself DELVALLÉE.  We are told that her real name was Céline Chéri, but more than that I cannot tell. I see her at Galeries St Hubert in Brussels ('Mdlle C Delavallée') as early as 1856 and for some years thereafter. She played soubrette roles in the provinces, and in 1863, I spot her at Versailles (Grévin in Le Vicomte de Letorières) and 1864 at Toulouse and Metz ('physique superbe, une taille charmante, de la verve comique de bon goût ..'), before she turns up in the casts at the Châtelet ... Cendrillon, where she succeeded Mariani as Luciole and also stepped in as Prince Charmant, Le Diable boiteux (Une Épingle), as Le Roi Crinière in Gulliver
Over the following years, she was a part of the Châtelet company, in statuesque roles ('une des plus belles fées du Châtelet') 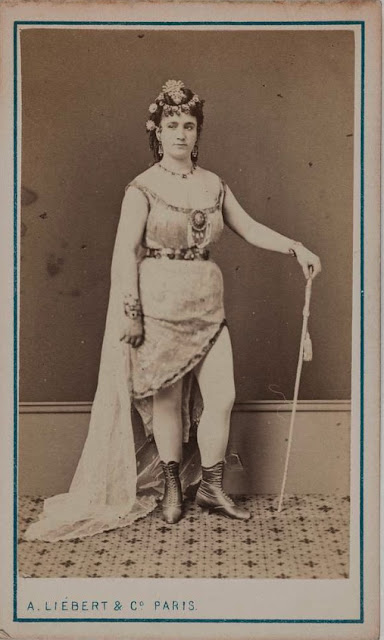 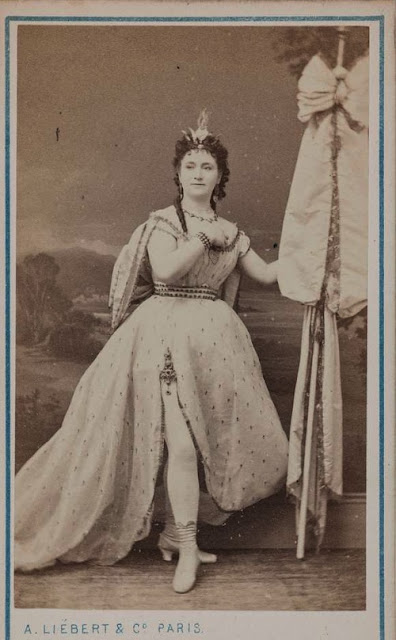 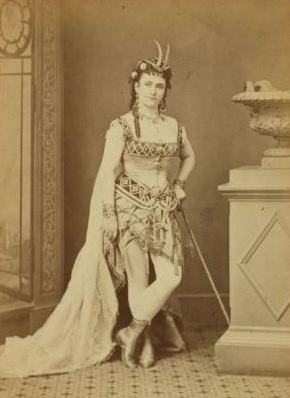 However, she also returned, on ccasion, to the provinces, and I see her at Poitiers playing La Grande-Duchesse in 1869.
One of the most futureful actresses to come out of the run of Cendrillon was a 20 year-old lass who took over as one of the sisters during the run.  Mlle Maria Gaultier made her earliest appearances as 'Mlle Gabrielle' but finally settled on Gabrielle GAUTHIER (b Paris 1845; d 14 rue Dupéric, Paris 16 July 1883). She is said to havent made her first appearance in Spectres et fantômes at the Délassements-Comiques in 1865 (recte: 1863) and gone on to appear in the féerie La Reine Crinoline (La Royaume de femmes) et al. She at first pursued her career largely in féerie at the Châtelet (5ème fée in Aladin, Cendrillon, Hélice in Gulliver, La Fée bruyère and later Prince Pompadour in La Chat blanche at the Gaîté) until she was engaged at the Théâtre de Variétes where she would remain for something like a decade, appearing in opérette -- notably creating the role of Eglantine in Les Cent Vierges -- in revue (Mont-Cenis in La Revue en Ville etc), in comedy (Le Commandant Frochard, La Poudre de l'escampette etc). 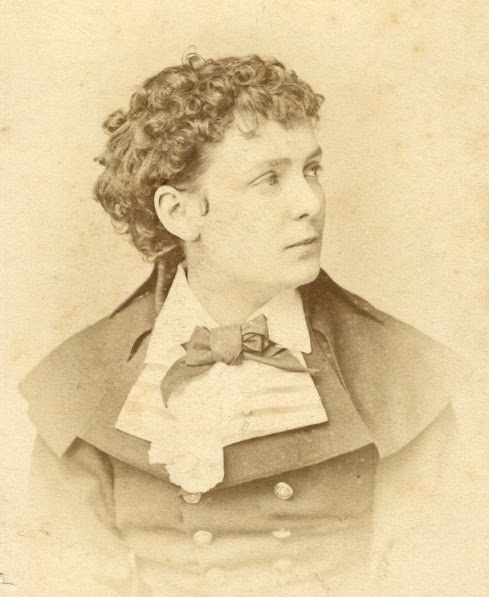 She played at the Gaîté in Le Chat Botté with Grivot and Berthe Legrand, and at the Châtelet in the lesser role of Comtesse Andreina, but with the coming on of the kilos switched to playing drama at the Ambigu (Robert Macaire, L'Assomoir, Nini-flora in Paillasse). The critics still found her 'ravissante' as the cantinère Houzarde in Quatre-vingt-treize at the Gaîté (1882), but it was to be her last role. She died the following year, aged 38. Her death was notified by librettist Albert Millaud of the Variétés ... 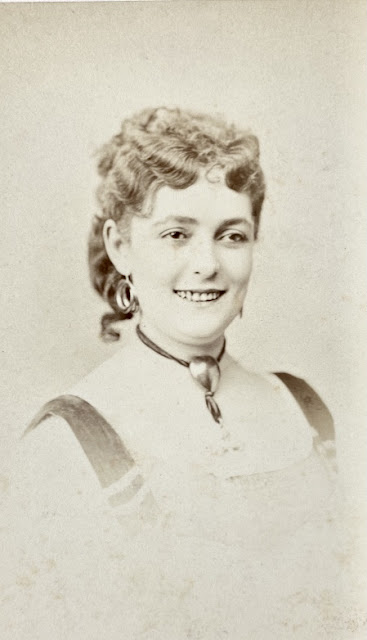 One more Cendrillon girl. The Châtelet seems to have been well supplied with stand ins. Desclauzas, in particular, had to be deputised when other duties round the theatre called.Delphine Ugalde, Marie Grandet and Mlle Delvallée had all played the Prince during the long run. But here I see a programme where the role is being played by one Atala Massue. Or Massüe. Who, I asked, may she be?
Rosine Josephine Atala MASSUE (b Paris 27 March 1849; d Paris 2 June 1916) was the eldest daughter of actor-theatre manager Alfred Pierre Massue and his wife Marie Rosine née Doux. I say 'eldest' because two other daughters, Janne Marie Irma (b Nantes 8 November 1850) and Marie Louise Lucie (b Paris 3 May 1852; d Paris 29 April 1927) also took to the stage. The three took to the stage, of course, at their father's theatre, the Grand Théâtre Parisien in the rue de Lyon. I see Atala 'starring' there in a flop opera on the Jeanne d'arc story in 1865. She moved up to appear at the Luxembourg (with her sisters, La Leçon d'amour, Ches une petite dame) and the Folies Saint-Germain  (Entrez vous êtes chez vous, Je m'demande, Venus in La Planète de Venus) and then moved to the Folies-Dramatiques to play Queen Mab in Les Canotiers de la Seine. 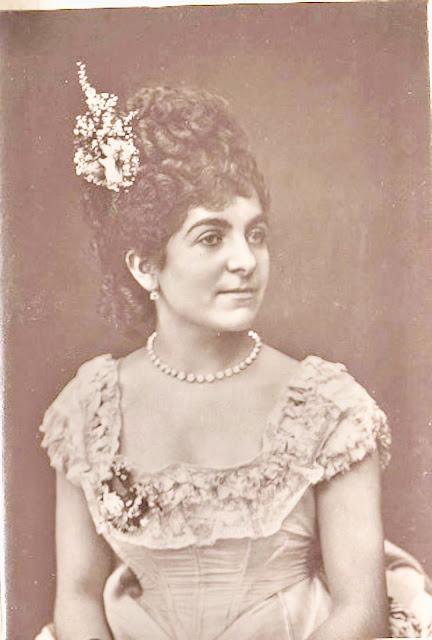 And somewhere in here she did her ephemeral appearance at the Châtelet. Her light soprano voice was heard in the original productions of L'Oeil crevé (Eclosine), Chilpéric (Fana), Le Canard à trois becs (Madeleine), Le Roi Carotte, as Mignonette in the féerie Pif-Paf at the Château d'Eau, in a revival of Le Royaume de femmes. She scored a fine success in the leading role of La Jolie parfumeuse in Brussels, played Giroflé-Girofla and Les dernières Grisettes, and it was said that she had been engaged by Cantin for the Bouffes, but ... there I lose her. It seems the theatre did, too ... but who knows?  She died in Paris, unmarried, in 1916.
Jeanne wed, at 18, Louis Joseph Dugué (who died in 1892) and Lucie became Mme Jacques Waubert in 1883, both continuing their careers.
And (for the moment) the last of these ladies. In the part of the pretty page, Oculi, was cast Mlle PANSERON.
Joséphine Françoise Panseron (b Paris 14 April 1842) was the daughter of ebéniste Jean-Charles Panseron and his wife Rose Eugénie née Paschal. She passed broiefly by the Conservatoire, and I first see her on the stage in 1864, in the revue En chasse, en chasse at Pigalle. However, by 1864 she was at the Châtelet playing 'un lutin' in Aladin. There, in Cendrillon, she proved decidedly useful, both deputising for the physique of Mariani as Luciole, and taking-over the part of Fleurette in the latter  part of the run. She also took part in the end of 1866 revue Le diable boiteux.
During the run she married the widowed Antoine [Charles] Jean-Baptiste Cabot, dramaturg and régisseur at the Châtelet, to whom she had already born (17 August 1864), at 22, a daughter. 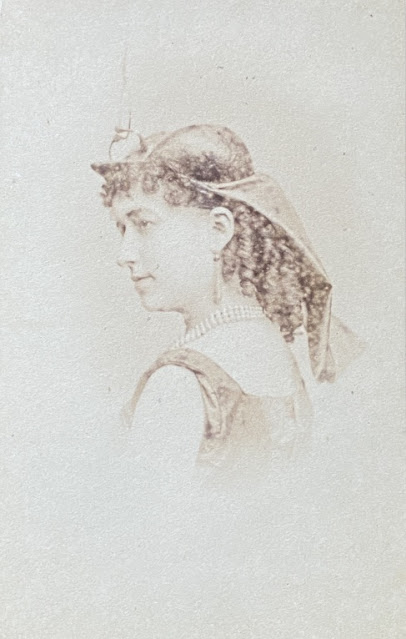 In 1873 she was engaged at the Renaissance, where she took, among roles in little comedies, small and very small parts in the creations and re-creations of a number of opérettes -- Amélie in Les deux cousines, Olivier in Héloise et Abelard, Théobaldo in La Petite mariée, L'Echansonne in La Tzigane, Louison in La Camargo, Julien in Le Petit Duc, Fatmé in La jolie Persane, Toinette in Belle Lurette, Rose in Janot, La Duchesse in Les Voltigeurs de la 32ème, Loulou in Mademoiselle Moucheron, Jacques in the revived L'Oeil crevé, Leilah in Le Saïs, Justine in La jolie parfumeuse, Juana in La Bonne Aventure, Frédéric in Ninetta  -- through a decade. My last sighting of her on stage is in 1883 when she created the part of Militza in François les bas-bleus at the Folies-Dramatiques. 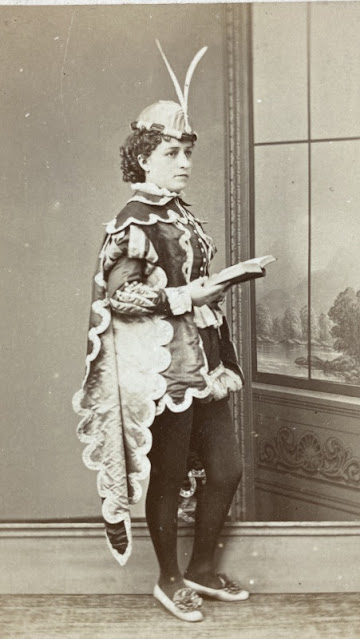 Her husband died in 1886, by which time their daughter, Charlotte Christine Cabot or Panseron had begun a useful career as an operatic soprano. As 'Mlle Panseron'. In 1890 she married the baritone François Mondaud, and continued as Mme Mondaud-Panseron.
It is said the Joséphine died in that same year. And in 1907 a little para about Charlotte mentioned that she was 'petite-nièce' of the well-known Auguste Panseron. Really? I think not, but I'll leave the genealogists to say yea or nay to that one. Anyway, Charlotte had an appreciated career as leading soprano in the provinces, spent two seasons at the Opéra-Comique, and became latterly a teacher at the Bordeaux Conservatoire.
Well, that was fun. It's far from complete as regards credits for 'ces dames', and I always like to sort out those birth and death dates ...  but the nice thj\ing about a blog is that you can always go back and add stuff when you stumble upon it.  Which I no doubt shall!
Bonne Bouche:  Mlle PETIT as the éleve Poney in GULLIVER 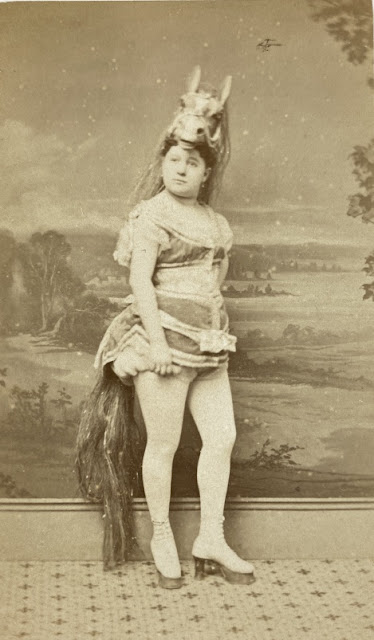 And mystery. This photo is labelled Châtelet. And what looks like "Liénard". He is clearly, with his miniskirtish herald's costume, a character in a féerie. But which one?  I thought it could be Cendrillon. That looks like an "H" on his tuniquette. H for Hurluberlu? Puzzle. 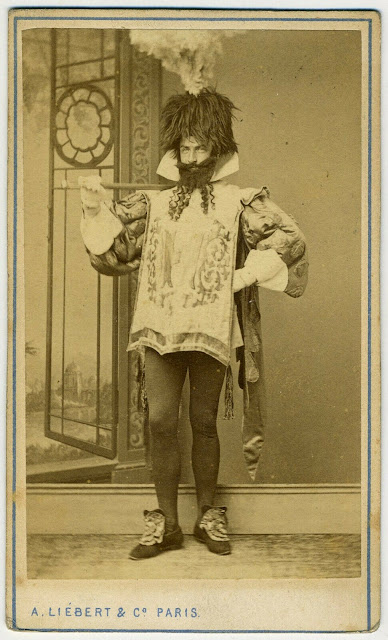 A couple more wandering pensionnaires of the Châtelet ... one of whom I know nothing, who appeared in the opening Rothomago as 'l'Heure de Minuit', and as Envy in the seven-deadly-sins spectacle Les Sept Chäteaux du diable as Mlle LAGRANGE 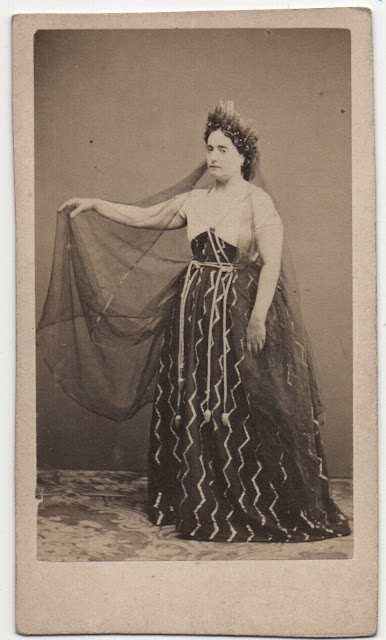 Another who would go on to become well-known as a leading lady around Europe. Denise [Olympe?] Ferrare, pictured here in her youthful Châtelet days in Le Naufrage de la Méduse became an opéra-bouffe leading lady in the provinces, and scored a particular hit as Cupid in the enlarged Orphée aux enfers in Paris, under her married name of Mme MATZ-FERRARE (b Paris 17 March 1842; d Bône, Algeria 1886). 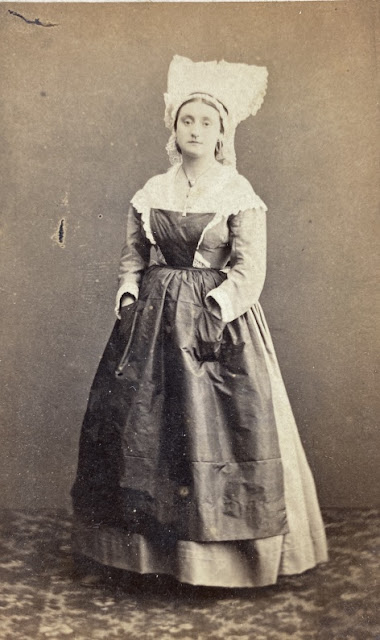 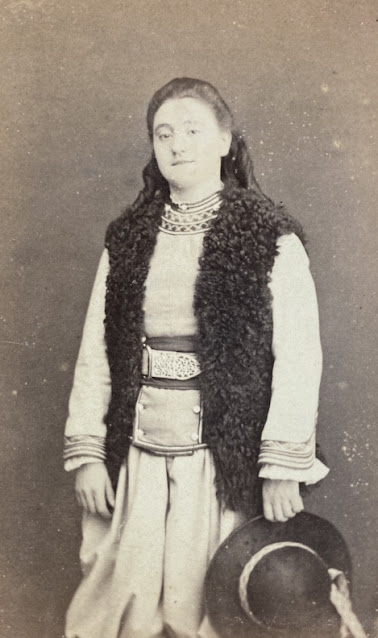 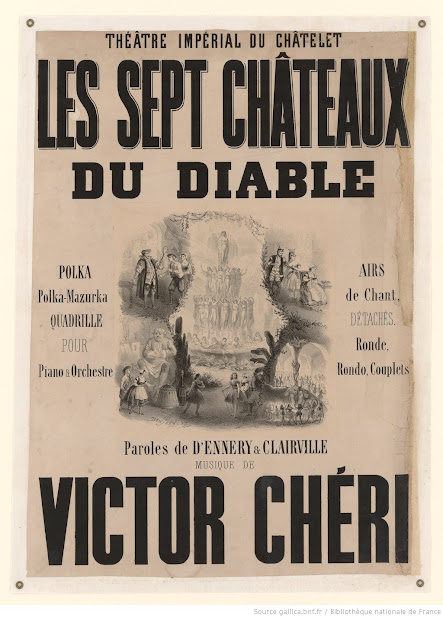 Posted by GEROLSTEIN at 8:07 PM