While dabbling in ancient Australian theatre-matters this week, I passed the name of Gerard Coventry. Sometime touring tenor with the D'Oyly Carte companies, then 'Mr Laura Clement', then stage director on several continents. I'd looked into him a few years back. So I dove into my data-base pulled him out, double-check and decorated him, and here he is. Still with a few dates missing

‘Mr Coventry studied at Milan under the elder Lamperti…’

Did he? So many British singers claimed a Milanese education or experience which they had never had. If he did go to the Milan Conservatoire, it would have been for a decidedly short term.

Mr Alfred Reynolds first comes before my eyes in 1873, singing in the ‘musical evenings’ staged by George Lansdowne Cottell RAM, to display his pupils to the public. Yes, that is where our 'Mr Coventry' 'studied'. At one of these concerts, the young man duetted Il Trovatore with no less a soprano than Clarice Sinico and was adjudged ‘a fair tenor’. At Cheshunt, on 29 September, he took part in Mr Cottell’s new operetta, The Archers. I spot him on 19 November, at the Eyre Arms, on a bill topped by pianist ‘Juanita Prytherique’ (Miss Harriet Jane Prytherch, a doctor’s daughter from Ruthin) and on 10 February 1874, at the Hanover Square Rooms, with another pianist, the seven-year-old Australian-born Maggie Okey (later to be Marguerite de Pachmann), and a selection of ephemeral singers. He sang ‘My beautiful, good night’ and was accounted ‘a young tenor with a very fair voice’.

In 1874, Mr Reynolds married Miss Prytherch (b 1846 x 6 January 1847), and decided, like her, to give himself a more romantic nomenclature. He became ‘Gerard Coventry’ (so was he born in Coventry?). Mr Coventry appears on the Beethoven Rooms bill for another singing teacher, a certain Signor Torretti, in May 1875, making 'his first appearance since his return from Milan', ('Nulla da te bel angelo', 'Alice, where art thou') and by the time he is engaged at Liverpool, next up, he is ‘of the Milan Conservatoire’. Well, maybe he was. For the odd month? But the 'billing' quickly disappeared. 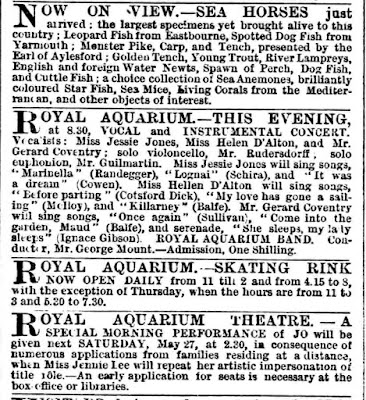 In the years that followed, he appeared occasionally at the Royal Aquarium Concerts (‘Once Again’, ‘Come into the Garden, Maud’, Ignace Gibsone’s ‘She sleeps, my lady sleeps’), at the Polytechnic, at various church concerts, in an Edna Hall concert party ('My Queen', 'Harbour Lights', 'Thy Face' 'his voice is rather rough and deficient in the lower register'), and in the Langham Hall recital of Glover’s The Deserted Village. He gave a concert of his own at the same venue in June 1877, and ventured onto the stage in the unfortunate sub-operatic Bjorn (January 1877) playing a Norwegian earl. 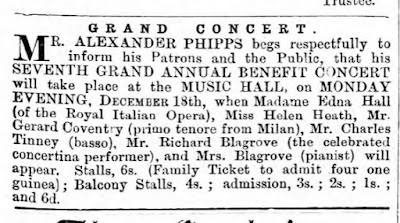 In August 1878, Wilfred Esmond, playing the role of Alexis in D’Oyly Carte’s The Sorcerer tour, caught cold. Was it the Aquarium connection? Mr Coventry was summoned, ‘studied the score on the train on his way from town in the afternoon’ and played that night at Sheffield. He didn’t get to keep the role, but when a single matinée was given at the Opera Comique, on 24 August, he was again called upon, to play the part with most of the original stars. He would later claim to have played ‘in the original run of the show’, and advertised himself as 'of the Opera Comique and the principal London concerts'. I suppose, technically, he did. Was he some sort of a standby? But 'the principal London concerts'? No. 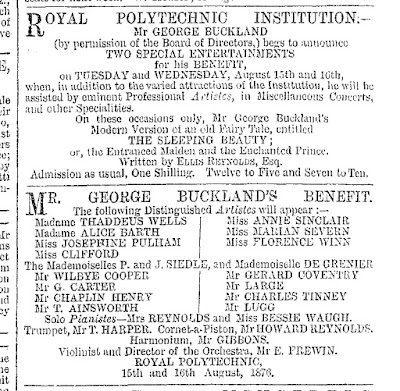 He appeared at Parry Cole’s concert, in Fridolin at Brixton, sang Fleetwood in The Puritan’s Daughter at the Alexandra Palace with Blanche Cole, appeared at the Blackpool North Pier, the Polytechnic, and a number of times more at the Aquarium. He also sang in a semi-professional Lord of the Isles at Wickham Park, before landing his best engagement to date, playing the singing role of Amiens in Marie Litton’s production of As You Like It at the Imperial Theatre, the theatre at the Aquarium. On 16 June 1880 he staged his own concert at St George’s Hall, with a modest bill featuring Alice Fairman and G H Snazelle.

In October 1880, he returned to the Carte management when he was given the part of Frederic in The Pirates of Penzance on tour, playing opposite the talented and already established young soprano, Laura Clement and in 1882, when Miss Clement was cast in the new and successful Les Manteaux Noirs at London’s Avenue Theatre, playing alongside Henry Bracy, Coventry and she played The Sleeping Queen as a curtain raiser.

In 1883, Coventry again stepped in, this time for John Child, in the touring Pirates of Penzance, after which he and Miss Clement joined Andrew Melville at the Birmingham Grand, playing little pieces such as The City Guard and At the Seaside. In 1884, they toured for Harry Jackson in Nell Gwynne, Coventry initially in a small role, but later taking over as principal tenor. At Christmas, they returned to Birmingham and played in pantomime, after which they joined forces with Howard Paul for a tour of holiday resorts (Locked Out, The Rose of Auvergne). In 1885, they are back singing for Lansdowne Cottell. Edward Lloyd was on the programme, and Coventry was 'slightly hoarse'. 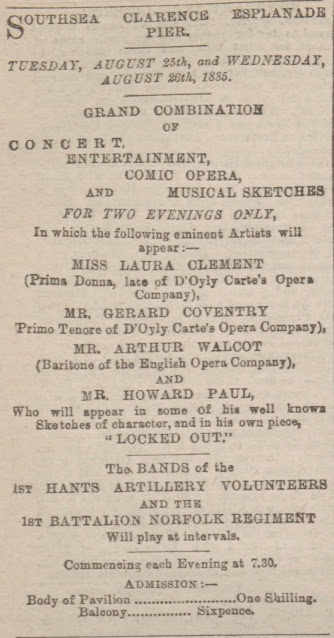 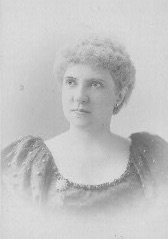 Later in 1885, the couple went to America, and Coventry advertised himself as c/o D’Oyly Carte, at the Fifth Avenue Theatre. It was, however, only Laura who was engaged by Carte for New York. 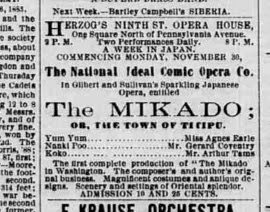 Instead, Coventry ('Laura Clement's husband') went to Washington to play twice-daily G&S for Herzog & Co, thence to the Brooklyn Pavilion (Bessie Gray Ideal Opera), and summer season at Baltimore with Rose Leighton and Ellis Ryse (The Drum Major's Daughter), as well as appearing in New York in Koster and Bial’s version of The Pirates of Penzance. In 1887, the pair went to California with a troupe starring Alice Harrison, and Laura was engaged to play at the popular Tivoli Theatre. Coventry, who had now virtually renounced performing, did some stage directing. One of the Tivoli productions was a musical version of She, written by a company member and musicked by W W Furst, with the striking Laura cast in the title-role. Al Hayman took the piece to Broadway, and Laura repeated her role to admiration there.
In 1889, Coventry produced Richard Genee’s Nanon, a decided hit in America, in England, with Laura starred and himself as director. He launched the piece at the Birmingham Grand (16 September 1889) and it closed on the road, taking his investment with it. 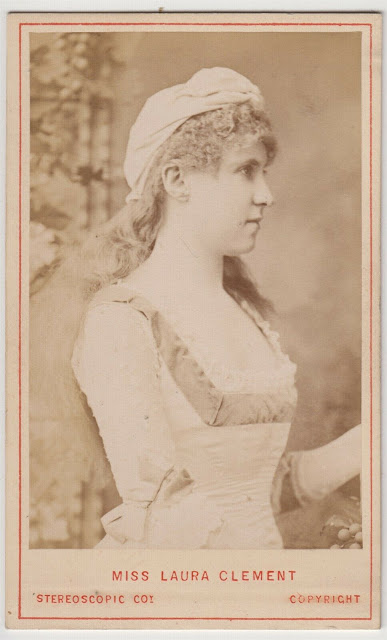 Back in America, while Laura kept the family flag afloat with a fine run of successful comic-opera roles, and repeated seasons of She, Coventry launched himself as a director of touring comic opera (Clover, Falka, Indiana, La Cigale for Lillian Russell), plays (Richard Mansfield), and of burlesque and extravaganza (Adonis tour, Off the Earth, 1999). He spent some time as stage manager at the Casino Theatre, but hit potential gold when he was hired to re-stage The Belle of New York for what turned out to be its memorable London transfer. 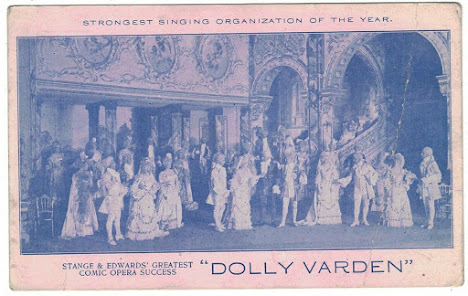 He was replaced in rehearsal by Johnnie Wallace from Australia. For the next half dozen years, he navetted between America, England and Australia, restaging the London hit A Chinese Honeymoon for the neophyte Shubert Brothers at the Casino Theatre, and Broadway’s Dolly Varden in London, lending a hand with the out-of-town closure Winsome Winnie, and initiating several shows for Broadway: The Runaways (which was re-staged by Fredrick Ranken after an unpromising opening), Lillian Russell's Lady Teazle and the successful Piff! Paff!! Pouff!!! (1905). He is said, in his potbiogs, to have re-staged other hit pieces such as The Burgomaster, Madame Sherry and The Pink Lady, perhaps for the touring circuits. 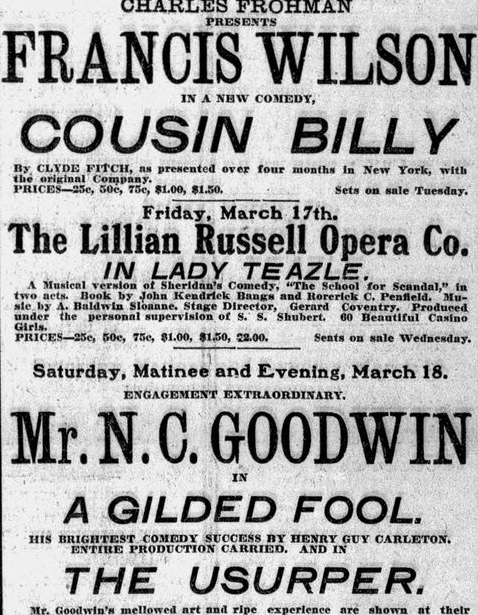 These seem to have been his last efforts in America, for he then headed off to Australia where he re-staged The Merry Widow for its local premiere (1908), as well as other such successes as The Red Mill, Our Miss Gibbs and The Catch of the Season and established himself over five Festive Seasons as ‘the Prince of pantomime producers’. 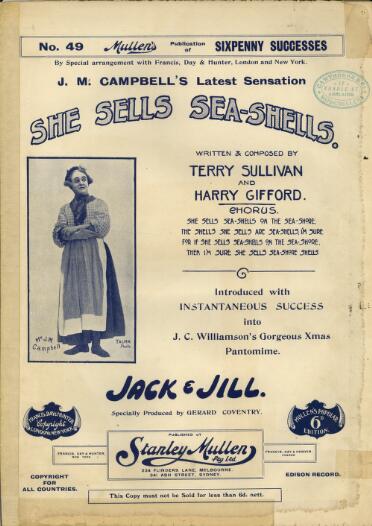 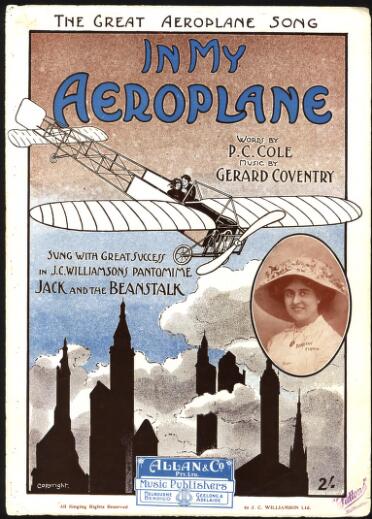 In 1911, he returned to America and was reported to be ‘living in retirement on a farm in Long Island’. Wading River, NY, to be precise.
He had at some stage divested himself of the lovely Laura (or she of him). She remained in America, working as a singer and an actress, into her fifties, while he paired up with a new, young ‘Mrs Coventry’ by name Jessie Beatrice Hall (b Soho 6 July 1874), a singer and the daughter of a London builder, whom he ‘married’ in Washington DC in 1895 (3 October, as Alfred Reynolds), and by whom he had at least one child, Barbara, born at Wading River, 29 July 1905.

They settled at Whitstable in Kent, where first Barbara (1926), and then Mr Reynolds-Coventry died (as Gerard Coventry) in 1928. Jessie is visible in 1935, living in Red Lion Square, and in that same year is registered as ‘insane’. She seems to have died in 1968, aged 93.

Coventry’s two partially successful careers, maybe, made up perhaps into one satisfying one. His second wife, however, can be credited with a wholly successful professional life as a vocalist and actress, although apparently (she lists herself as 'divorced' in 1910, in 1915 as ‘single’) not a personal one. In 1930, she is censussed in the New York Actors’ Home, aged 72, and professing ‘widow’. She is buried in Kensico Cemetery, and her grave marker is shared another English expatriate actress, Kitty Gordon. 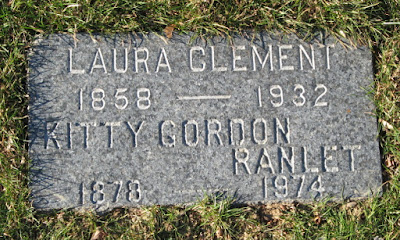 In 1929, Laura was left a legacy by the singer Jeannie Winston, and the executors advertised for her 'next of kin'. Laura, of course, was still alive. But her only near relative (if he were still legally so) had died the previous year.

(1) no child of the name of Alfred Reynolds was born in Nottingham, as Mr Coventry claimed to have been, in or around 1849. In fact, only one Reynolds male baby appears in the registers: Archibald John, by John (railway porter) out of Elizabeth. Archie (railway clerk) can be seen in the 1851, 1861 and 1871 censi (which Alfred-Gerard can't) but dang it, he died in 1872 ... so it ain't he. Alfred married three times as 'Alfred Reynolds'. Why can't I find his father's name, and birth registration? What's the mystery?

(2) stirred by the profusion of Reynoldses on the Buckland Polytechnic programme, I wondered if they were all connected. Seemingly not. Cornettist Howard Reynolds was Irish, his pianist wife was née Janet McHugh, and Ellis Reynolds 'esquire' was the Secretary of the Bath races, the Corsair Rowing Club, and wrote Buckland's shows for over a decade as well as 'musical eccentricities' for the music-halls. Oh! He died in 1868. His son must have taken over. He lived in New Cross. So no connection with Nottingham!
Posted by GEROLSTEIN at 6:26 PM