This is a photo of a classy concert party, dating from the early part of 1867.  The wages bill for the company must have been enormous. But the impresario who put this group together was accustomed to grandiose speculations, grandiosely publicised ... and I imagine this photograph was part of the merchandising for the so-called Patti-Concert tour in Italy.

The paper Il Trovatore commented, not without reason, 'Why is it called the Patti Concert?'. Why is the entire bill not named in the title? And then went on, in its critique, to opine that Mlle Patti was actually the least impressive artist on the programme. Oh, of course, that was Patti as in Carlotta Patti, not in Adelina Patti. Sorry if anyone (apart from some Internet sites) got confused. I'm sure you were supposed to.

Carlotta Patti was a fine coloratura soprano vocalist, and the only singer in the party. The rest were one solo violin, one solo 'cello, one solo harp, one solo piano, and one accompanist. But what 'ones'.
Arguably the best, certainly among the best, of their time. It was rather like putting a Gruberova together in a concert party with Oistrakh, Rostropovich, Ossian Ellis, Lily Kraus and Gerald Moore. 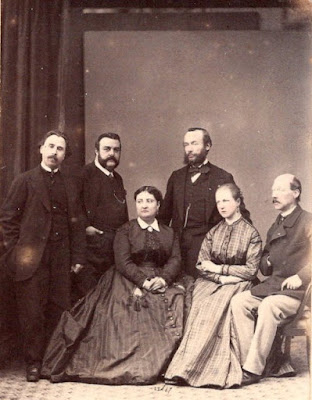 The man behind this was the Hungarian-American impresario Bernard Ullman, about whom reams have been written, so I won't write any more. Suffice it, that he was one of the most ambitious and colourful music and theatre men of his time, also one of the most unscrupulous, widely-tentacled and Barnum-esque. A risk such as the salaries for this party was nothing new for him.

So, who do we have here. The photo is labelled with the names ... but not in any order! However, it is, I think, not too difficult. Carlotta Patti is evident, at the centre of the group. The other, younger lady is the teenaged pianist Mary Krebs (1851-1900).

And the men? Harpist Thomas ApThomas, accompanist Eduard Franck, violinist Henri Vieuxtemps and 'cellist Alexandre Batta. I think, in that order, left to right. Yes, difficult, in the time and place, to do better.

I was a teensy bit disappointed, then, when I lit on the programme for one of their concerts, at the Teatro San Benedetto in Venice, 30 January 1867. It is, shall we say, virtuoso-popular

Well, this was the age of the 'Fantasia', the technically-showy, bravura, instrumental equivalent of Rode's Air and Variations and the rest of Mlle Patti's repertoire. More flourish than content. But for the artist, I guess it was as good a way as any to popularise their arrangements and sell their rather expensive sheet music.

Anyway, thanks Herr Ullman, your bit of publicity material gives us, 150 years on, a very agreeable souvenir of five very worthwhile performers.


PS If anyone wants to snap up the original of this photo, it is (along with uncountable other goodies) to be found in the internet shop of Bruno Tartarin at  https://www.photos-discovery.fr/