.
I’d forgotten how long it had been since I had been to Australia for more than just a quick change of planes on my way to somewhere else. I found out yesterday when I tried to use my local bank card ... and discovered that it was a whole year out of date!
In fact it’s more than two years since my last visit, and in those two years a few things have changed. First and foremost, Barry and Rosie (whom frequenters of this blog will know well, and who have been my very dear friends for nearly 40 years) have moved house. From the likeable Italian suburb of Leichhardt, to lovely Lane Cove, in the northern outskirts of the city. It’s another world. Here, we sit on a wide open terrace, glass and fork in hand, gazing over the green Australian bush, alive with the hoarse croaks of the kookaburra and the buzz of the Aussie mozzie, and pleasantly far from the howl of aeroplane engines. Delicious! 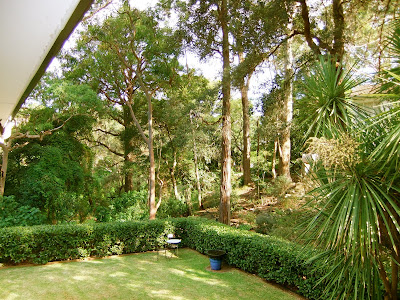 Australia in this January of 2010 is – there is no other word for it – Hot with a capital H. The TV has just told me that it was 41 degrees yesterday, the car thermometer clocked 49 after sitting in the sun … such temperatures I’ve never experienced and I had no real idea how to cope. 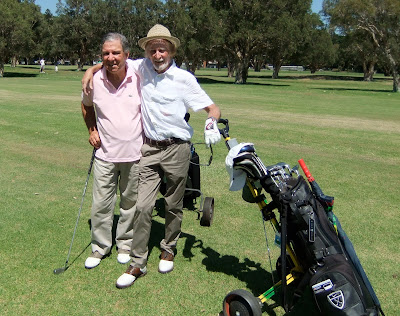 My first day here, I accompanied Barry and Ivano (above) to Rose Bay golf course for a gentle round (them) of nine holes, and a gentle green walk (me) in the sun. Many is the time I’ve looked over the fence at Rose Bay golf links (for Rose Bay is where Ian’s mother lived her last years), so it was fun to stroll around inside the fence. You only get to stroll, for the course is largely used, it seems, by late middle-aged ladies whose average stroke runs 20 metres and whose airshot tally is momentous, and very tall young men with lots of length and minimal accuracy. I wonder if the ball with the red ‘H’ on it was ever found by its rightful owner…
But I didn’t realise how hot it would be on the hatless parts of me that no longer have much hair! A couple of middys of Toohey’s Old Dark (very nice) were required at Hole Ten to lower my cranial temperature!

Day two, some gentle Lane Cove downtime (with a little shopping, notably at a first-class food-n-flowers emporium named Thomas Dux), and day three – what else – off to the races. Now, last time I was here, Barry and I went trotting at Sydney’s Harold Park. We left after a few races, I declaring it was the most horrid hippodrome I had ever been on, anywhere in the world, in my many years of racehorse-owning and horse-race-going. I never thought that I would return and, in fact, I was under the pleasant illusion that the venue had been bulldozed, in favour of wide-open Menangle (which I have yet to try). But it hasn’t. It’s still there, and horses still squeeze their way around it to an audience of a few hundred uncomfortable punters … but .. The ‘but’ was that last night’s programme included two horses very dear to Wendy and I. ‘Ty’ (Typhoon Anvil) who spent his growing and early racing years with us, and ‘George’ (General George), the second son of Gerolstein’s resident pacing broodmare, ‘Sally’, both of whom are now racing in Australia. So we went. 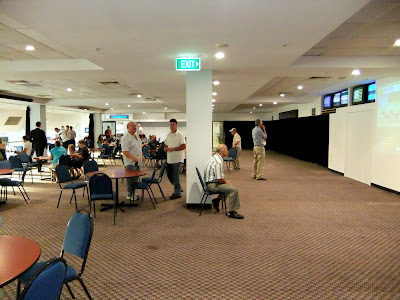 Harold Park is as depressing as ever. Gloomy corridors, and ‘prison’ staircases, stained utilitarian carpets, windows so filthy you can’t see through them, a choice of two beers served at $4.50 in a plastic cup and not even a sandwich in sight. Maybe the ‘members only’ and ‘club’ areas are better (‘visitors, stay away!’) ... I sha’n’t, doubtless, be finding out. The surly girls in Garrards made me think longingly of the lively lasses at Addington, and … well, at least the one and only bookmaker was cheerful enough, if barely patronised. The place just oozed moribundity. 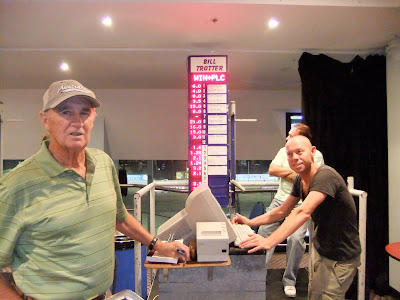 On the slim credit side of the leger, the racing-round-a-saucer was somewhat better than it had been last time, and I was kept buoyant by the fact the both our babes put on a show. 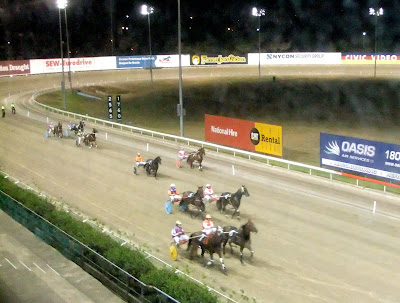 Ty – at long odds – was left in front when the favourite galloped, and he led the field up to the straight entrance (it must be the first time ever in his life he has led!) before being run down for 5th. 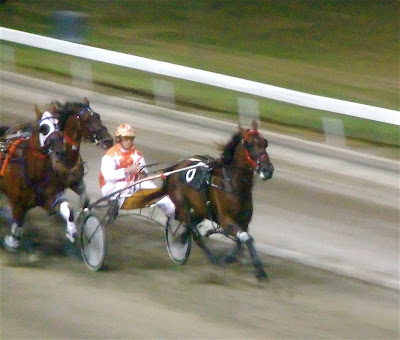 In the last race of the night, George—at even longer odds – starting from ten, followed a running line that couldn’t run, a three-wide line that couldn’t go forward, was second-last on the turn, and flashed home for a splendid fourth.
So the evening was rescued from shabby horror, and I was able to head back to Lane Cove, in the slightly cooling night, looking forward to a soontime visit to Menangle (or anywhere) and a more agreeable view of Australian harness racing.
Posted by GEROLSTEIN at 2:38 PM