.
Event of the week: I got to catch up with Antonette and Daniel. Antonette is Barry and Rosemary’s daughter whom I have known since she was a thought, an egg, a tiny swaddled pixie in a cloth carrying-cot on my couch at Bruton Street, London W1, a gawky freckled dance student … and whose godfather I ought to have been. Foolishly, the Catholic Church, thinking only of retaining dominion over a child’s religious allegiance, and ignoring things like love and inheritance, disqualified me on grounds of race and (lack of) religion, so I am only a godfather at heart.
Antonette is now – three decades on -- grown into a beautiful young woman, with a fine career in Australian broadcasting and last year – when I, alas, was on the high seas somewhere between Vanuatu and the Solomons -- she became Mrs Daniel Johnston. 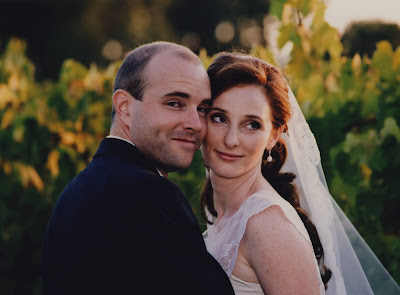 Daniel works in my sphere, as a dramatic pedagogue, and yesterday we discovered ourselves quoted in one and the same theatre magazine. So you might say we are on the same wavelength.

Saturday night, the family and a dozen friends, old and young, gathered for an Aussie BBQ here at Lane Cove, and even though the heat-wave burst in a flurry of rain early in the evening, a really lovely time was had by all. Notably me. And I snapped a slightly fuzzy photo of the Collins family… 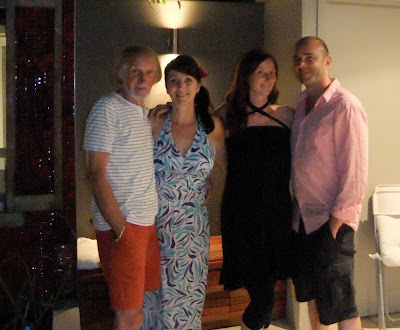 Sunday, we visited Daniel and Antonette in their apartment in the charming coastal suburb of Clovelly for morning coffee, and then we headed for Randwick. Yes, Randwick as in horse racing. For it was the day of the Inglis Classic Yearling Sales. These sales mean a lot to us, for from them came our Rosmarino – the winner of some $200,000 in stakes for us, and now the mother of our equine children. The latest of those children will come up for sale here in April (I shall be on the spot!) when, hopefully, he will make Barry, Ivano, Gerald, Les, Brian and I enough Aussie dollars to keep us in golf-balls (them) and horseshoes (me) for the rest of our lives.

The Randwick sales complex is agreeable. More so than its New Zealand equivalent, where I bought Elena four years ago. Firstly, it is effectively open-air rather than deeply tented, but what I liked most is the way it is run. The auctioneers (well, two of the three) were immeasurably better than their Kiwi equivalents: no campy joking with named friends in the audience, no ‘look-at-me-will-you-put me on Celebrity Squares’ performances, no endless, bawled bla-bla, just efficient and almost comprehensible calling of the bids (will someone teach these guys microphone technique!) and wrapping up of sales. They make you want to bid, whereas the Kiwi jokers always seem to be rooting for their mates alongside the podium.
The sale prices were surprisingly modest -- $10,000-$60,000 -- during the couple of hours we watched (I am told it was a day for modestly pretentious horses), but one chestnut filly by Snitzel out of Innocense caught fire and made it up to $130,000. Maybe this was because a daughter of the hitherto not exactly fashionable Snitzel had put up a showy display at the races the previous day. Or maybe someone knows better than I what to look for in a thoroughbred horse. I shall watch with interest the future of this young lass. (PS: the top-seller of the day went for $250,000). 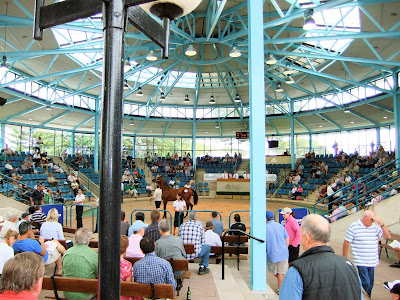 Today was a day for a little shopping, a lot of lazing, and the tennis and the races on the TV.
Now, I normally don’t watch TV except for the harness racing. But today I did some tennis, and also suffered a number of news bulletins. And in both cases .., well, I’m very worried about Australia. I know tomorrow is so-called ‘Australia Day’, but I was shocked by the pathological over-the-top ‘nationalism’ shoved out of the box and down my throat every five minutes. Ozzie this, Ozzie that ... surely only the most insecure folk feel the need to be so desperately and bawlingly ‘assertive’? A pathetically ludicrous (and carefully publicised) group of painted loonies who pretended an interest in tennis were bad enough, but the bloke who is so scared of the past that he wants to remake the national flag was undoubtedly the saddest. I can’t believe it! Australia which, when it had a government with a brain, looked as if it could do anything and go anywhere in the world .. reduced to ‘Ozzie Ozzie Ozzie’, yellow face paint, and attempts at revisionist history .. it’s pure jingoism and nothing short of … well, sad.
Hopefully, Australia Day will bring more youth, more joy, more hope, more uncringing positiveness… and less mindless yelling.

Stop Press. I forgot the horses!
A grand horsey day here on the left hand side of the Tasman. ‘George’ who ran so encouragingly at Harold Park went out again today, already, at Menangle … and he won! And at the same time, down in Victoria, Elena’s brother (and Livia’s uncle) ‘Eton Bromac’ did exactly the same! One gold star for our Sally! Her progeny now have 30 wins. And a sort of one for Elena… who tomorrow goes to the racetrack herself. Fingers crossed.
Posted by GEROLSTEIN at 2:46 PM