.
Day two at school for D'Arcy and Lucie.
The day's new adventure was to learn to walk, on the lead, behind the jogger..
D'Arcy had to go first, because propinquity with his pretty niece has to be kept to a minimum. It took him a little while to get the jist of the thing: for a couple of paddock-laps he tried to play tug-of-war with me and my tractor, but he soon settled and when he had done a couple of model laps, Wendy trundled him down the alleyway to Yard Number One, specially set up for feisty young boys. 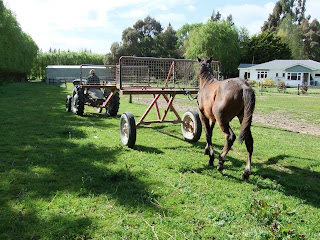 Safely installed, he was given the benefit of a bit of worldly wisdom from one of our Elder Statesmen 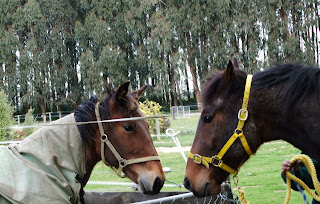 And before long, he was hooning proprietorially round his new kingdom and apparently not even thinking about fillies 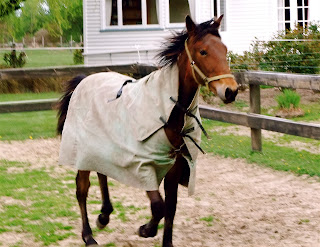 We thought that Lucie, who gives an air of being a little more apprehensive than D'Arcy, would probably go less well, and need a soft and gentle lesson. Nothing of the kind! As the tractor moved slowly off, I waited for the customary first protesting tug ... but it never came. She walked nearly all the way, with just the odd little hop and skip when we went over a bump. A splendid first effort .. Wendy had no need to walk alongside her, and so was able to film the (as you can hear, decidedly windy) proceedings

Bringing up babies can be tough, but these two (so far!) are proving pleasing pupils!
Posted by GEROLSTEIN at 5:03 PM