.
My house may be full of men – workmen – but 28 October was definitely ladies’ day.

Duchess giving birth .. and, yes, little Douche is a girl.

And to top it all off, Elena got it right today and ran her best trial to date. She was drawn at the outside of the mobile gate, number seven of eleven starters, but John (Dunn) the driver urged her forward at the start, and continued to urge her on until, as they came past the winning post the first time, she was sitting parked outside the leader. A leader, may it be said, wearing the fearsome blue with white stars of the top-notch Purdon stable. 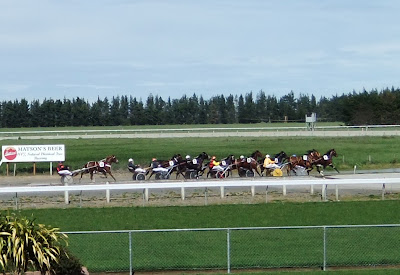 And she stayed there. As they came into the home straight, she was still there, having a go at the two Purdon horses, and she just kept on coming. I believe she even ht the front inside the last 50 metres. But then a horse named Flash Move, which had sat behind her, in the perfect spot, throughout, turned up its wick and dove past her to win by a fast finishing length. On the line, another fast finisher nosed her into third.
It was a grand run. She’d been three wide for more than half a lap, stuck in the unloved parked place for all the rest, all the old problems of steering had largely disappeared, and best of all she had fought on keenly at the end without John having to drive her out.
As for the competition, well she beat home both of the Purdon horses, and Flash Move went out last Friday at Addington for its first race as a pacer … favourite! So, obviously it’s well thought of. We shall see. And Elena? Well, hopefully 12 November, at Ashburton, will be the occasion of her long awaited race debut. She’s earned it! 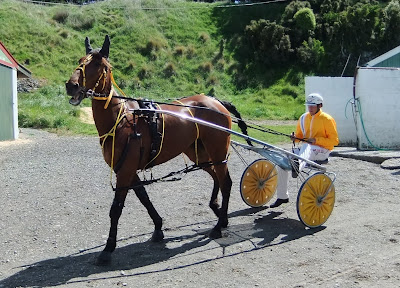