The SZ box: two great stars of the Operette

A couple of delighful photos turned up on e-bay today.  Its seems someone is clearing out the letter SZ .... 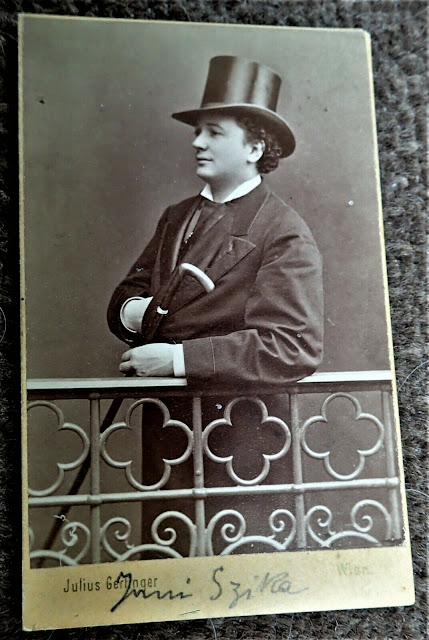 There are many photos of Szíka around, but I've never seen one quite so youthful.  Please note, directors of the eternal Fledermaus, that he was aged just thirty when he created the role of Eisenstein in Strauss's Operette. The 20th century passion for Granny casting nowadays, often, has him double that age.

SZIKA, Jani [SZÍKA, János] (b Pest, 7 February 1844; d Vienna, 20 October 1916). The original Eisenstein of Die Fledermaus and the star of a long run of Viennese musicals.

After being originally destined for a medical education, Jani Szika began his stage career, at the age of 18, at the Deutsches Theater in his native Pest. In 1864 Friedrich Strampfer hired him for the Theater an der Wien as an actor, but soon after he found himself cast in such musical pieces as Bazin's Die Reise nach China (Maurice Fréval), in the spectacular Prinzessin Hirschkuh(La Biche au Bois, Mesrour), and as Prince Saphir in Offenbach's Blaubart. During the run of Die Grossherzogin von Gerolstein, Szika stepped in to substitute for Albin Swoboda in the lead tenor rôle of Fritz, and coped so admirably with the part that his career from then on took a quite different turning, and he went on to make his name as a leading man in opéra-bouffe and Operette.

In 1868 Szika appeared as Charles Martel in Genovefa von Brabant, in 1871 as Flink in Drei Paar Schuhe, Marzas in Lecocq's Le Rajah de Mysore, Falsacappa in Offenbach's Die Banditen and created the lead light-comedy rôle of Ali Baba in Johann Strauss's maiden work, Indigo und die vierzig Räuber. In 1872 he was Spark in Offenbach's Fantasio and Emil Falkner in Die Theaterprinzessin (La Diva), in 1873 he created the part of Benvenuti Raphaeli in Strauss's Carneval in Rom and played Abälard in Litolff's Abälard und Heloise and Marcassou in Offenbach's Die Wilderer (Les Braconniers). In 1874 he appeared as Gstettner in Jonas's Die Japanesin and took time out briefly to attempt to run the ill-fated Komische Oper (later the Ringtheater, and the site of Vienna's worst ever theatre fire) before returning to the Theater an der Wien to create the most famous rôle of his career as Gabriel von Eisenstein to the Rosalinde of Marie Geistinger in Die Fledermaus.

In 1878 he returned as a guest artist to create the rôle of Sepp in Das verwunschene Schloss and in 1879 he appeared as Loisl in Das Versprechen hinter'n Herd with Geistinger, but he was engaged in Berlin in 1880 and he made his career during the 1880s largely in Germany. There he created the rôle of Caramello in Strauss's Eine Nacht in Venedig in 1883, and appeared as Sauritz Sonsen in Der Doppelgänger (1887), Graf Neckar in Adolf Neuendorff’s Waldmeisters Brautfahrt (1887) and Giuseppe in Incognito (1887) at the Walhalla-Theater, but he spent an increasing amount of time acting in non-musical plays. In 1891 he went to Frankfurt where he completed his re-transformation back to being the straight actor as which he had begun, and he spent his later years playing in classic drama and comedy, from Shakespeare to Schiller.

Likewise, Sári Fedak was vastly photographed, but not so often in this role 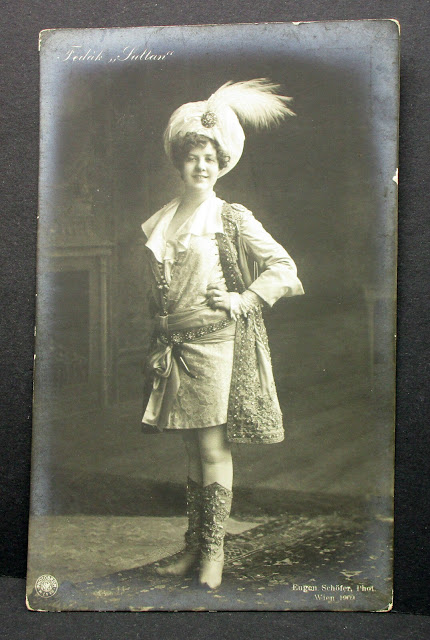 On my ill-starred Hungarian visit, 30 plus years ago, when the political situation forced me to flee on the last train out to Vienna, I bore on my back 20 kilos and more of old Hungarian sheet music. Amongst it, were several beautfully decorated large selections from A szultán. When I got home, I played them, and was delighted. That whole 20 kilos is now safeguarded in the Harvard Theatre Collection ... and, I suppose, in the Hungarian archives. Perhaps the Operettszínház would like to do it ...

A SZULTÁN Operett in 3 acts (prologue and 2 acts) by György Verö based on Les Trois Sultanes by Charles Favart. Népszinház, Budapest, 19 October 1892.

Thirty-five-year-old Verö, a conductor at the Népszinház and a sometime playwright, had been leading a busy career in the musical theatre, principally as a translator of Viennese Operetten for the Hungarian stage, when he was given the opportunity, in the wake of the success of such local composers as József Konti, to write the score for an operett for his theatre.

His first work, for which he wrote not only the music but also the book and the lyrics, was A szultán, a piece based on Charles Favart's verse comedy Les Trois Sultanes, ou Soliman II, originally played in Paris with a musical score by Gilbert (Italiens, 9 April 1761). Since then, Les Trois Sultanes had been through the musical mill, being set to original scores by several Italian operatic composers (Le tre sultane, Solianno II), by Vienna's Francis Xaver Süssmayer (Soliman II, Kärtnertor Theater 5 October 1799), by Swedish and Danish composers, and being played in Paris, London (Bickerstaff's The Sultan, or a Peep in the Seraglio, 1775 et al) and in New York in variegated forms of its various operatic forms. Amongst a further bevy of adaptations and musicalizations it was also produced as a Singspiel under the title Roxelane (Die drei Sultaninnen) in a version by J Perinet at Vienna's Freyhaus-Theater (18 July 1799), given in a new version by Lockroy at Paris's Théâtre des Variétés in 1853, with Delphine Ugalde starred as Roxelane, and featured at the Comédie français (18 August 1892), with all its ‘antique’ musical sections intact, with Albert Lambert..

Ver*o*'s version of the famous tale of a travelling mademoiselle who gets caught up in a sultan's harem and ends up subduing and marrying the mighty man was illustrated by a delightful if vocally demanding score which mixed the rhythms and harmonies of the Viennese Operette with some more particularly Hungarian ones and also with a definite but unclichéd flavour of the East. If the Sultan's waltz rondo `Szeretlek Roxelánom' proved the hit of the show, there were plenty of other fine and funny musical moments -- a delicious laughing song, with nothing but `ha-ha-ha' lyrics, which twittered up to rows of top B-natural acciacaturas, a lively galop trio, a splendidly unsoppy romance for the number-two lady, a drinking song in waltz time, littered with trills and cadenzas, the Sultan's tricky Oriental Serenade and some flavourful ensembles, all of which made repeated use of the area above the stave in their vocal writing.

The Népszinház's established musical star Aranka Hegyi created the trousers rôle of Selim, the Sultan, whilst the newest addition to Budapest's stellar register, plumply pretty Klára Küry who had just made a hit as the heroine of Varney's La Fille de Fanchon la vielleuse, was cast as little French Roxelane, with Népszinház comedians Vidor Kassai, József Németh, József Ferenczy and Adolf Tollagi and the composer's wife, Célia Margó (Delia), in support. Helped just a little by the newfound popularity of Küry, A szultán was a major success. It was played no fewer than 84 times, almost equalling the record of Konti's A suhanc, the Népszinház's most successful local piece to date. If this was not the equal in terms of run to such all-time Budapest favourites as Les Cloches de Corneville, Der Vogelhändler, Mam'zelle Nitouche, Der Zigeunerbaron, Boccaccio or Rip, it nevertheless allowed A szultán to place itself firmly on the second rung alongside The Mikado, Le Petit Duc and Der Bettelstudent in the Népszinház's annals and, like them, it remained for many years a favourite in Hungary, being given a major revival at the Király Színház in 1911.

Later, when Verö ventured abroad, Der Sultan (ad Verö, Carl Lindau) was staged in Vienna -- an achievement shared by few other Hungarian operetts of the period -- with Sári Fedák starred in the title-rôle and Grete Freund as Roxelane (46 performances).

Posted by GEROLSTEIN at 5:06 PM