Westland: from Scotland to India to New Zealand 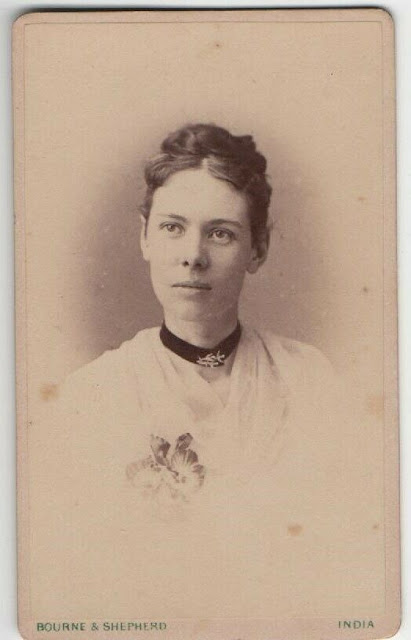 Mildred Westland, photographed in 1886 in India. So I had a wee investigate and found her family, and also ... yes connections to my New Zealand homes ...

So I thought that, with my second cuppa, I'd just record what I'd found ...

Mildred was born as Janet Mildred Jackson, in Clifton, Somerset 13 December 1854, daughter of Charles Julian Jackson, a medical man, and his wife Janet Leith née Harvey. Dr Jackson went out to India circa 1870, and his family later followed him. He died ('retired deputy surgeon-general in HM Indian army') at Nice 16 January 1895.

Mildred wed, at the age of nineteen, Scotsman James Westland of the Indian Civil Service (Darjeeling 23 April 1874) and a few weeks later he was appointed accountant and comptroller general to the Indian Government. Over the following decade and a half, he had an ever-more-distinguished career in government financial affairs, during which time Mildred gave birth to five children. The four who survived were

Charles James (b Nagpur 1875; d Glen Muick, Cheviot, Hurunui 11 July 1950)
Agnes Mildred (b Aberdeen 1877; d Boar's Hill, Oxon 23 April 1964)
Dorothy Harvey (b Calcutta 14 March 1881; d Bournemouth 1 June 1946)
Francis Campbell (b Camden 17 September 1884; d Didcot 10 April 1941)
In 1889, James resigned from his position in India, for health reasons, and the family returned to England where they can be spotted, passing through, at a Kensington hotel in the 1891 census. And a few days later (10 April 1891) they left that hotel and boarded a ship for New Zealand. Mother, father, and four children aged sixteen to seven years of age. And where did they settle? Why in the Hurunui. I pay my water-rates to Hurunui Council. I guess their homestead "Glen Muick" (named for the spot in Aberdeenshire where the Westlands came from) is about 30 minutes drive from my home.
However, their stay was short. In 1893, James was appointed to the Viceroy of India's Executive Council and the family -- seemingly minus Charles -- returned to India. In 1899, they finally returned to England where James -- now Sir James KCSI (1895) -- became a member of the Council for India. I see him at the Yarrows, Frimley in 1901.  James died at Weybridge 11 May 1903. Dame Mildred at a Montreux hotel 8 March 1927. 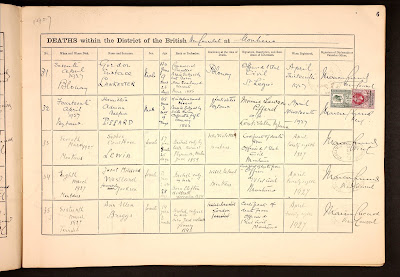 I belong enthusistically to a group named Family Treasures Reinstated. We try to find present day family members to whom old photos and bibles and diaries can be restored. Several of the members, in particular, are whizz-bang winklers-out. So I thought I'd see if I could find a home for Mildred.
Next generation. Agnes = 0 (unmarried), Francis = 0 (married late and died), Charles = 2 (married Jessie Eleanor Fisher, son Alan and daughter Hilary), Dorothy (Mrs Lt-Col Sisley Richard Davidson DSO) = 0

Wow! The famous First Four Ships! Toff stuff.
Charles farmed at Cheviot, but was an avid astronomer, and at one stage moved to Apia, as an official government astronomer. He also wrote on the subject. 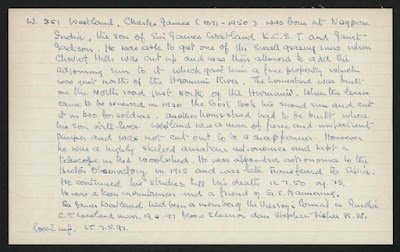 Well. We're down to Alan and Hilary. I see Hilary as bridesmaid at Alan's wedding, I see her living in Samoa, I see her doing an 'extended tour' of the Continent with Mildred, I see her 'of New Zealand' with Mildred at a do in Scotland, and I see she is still assumed to be 'Miss' in a lawyer's ad in 1944 ... but she wasn't! Not quite. Hilary Frances Westland married Francis Richard Dykes ... she lived in St Albans, Papanui .. my stamping ground! ... and died 11 November 1989. But no children. Her husband died right after the wedding.
So it's all down to Alan. Alan Stephen Westland (1897-1970), married Edna Longdin. Son 10 September 1933.

Westland, George Harvey (Harvey), formerly of Glen Muick, Cheviot, on May 8 2021, peacefully at Rangiora.  Loved brother and brother-in-law of John Westland, Madeleine and Neil Bissell (Wellington) and the late Janet Parker, loved uncle to all his nieces and nephews.  A Memorial Service to remember Harvey will be held in the Kaiapoi Working Men's Club, 113 Raven Quay, Kaiapoi, on Friday June 18 at 1.00pm.  All welcome.

George lived not far from us. He was into gun manufacturing and shooting. The Malvern Rifle Club.

Well, I guess that's found the descendants. Now I'd better get a third cuppa, and get back to my real day job.

Posted by GEROLSTEIN at 7:25 PM