I like to think I know a wee bit about Victorian vocalists, so I'm always curious when I come upon a photo of one whose name means nothing to me. Here's one, stumbled upon with today's first cup of tea. 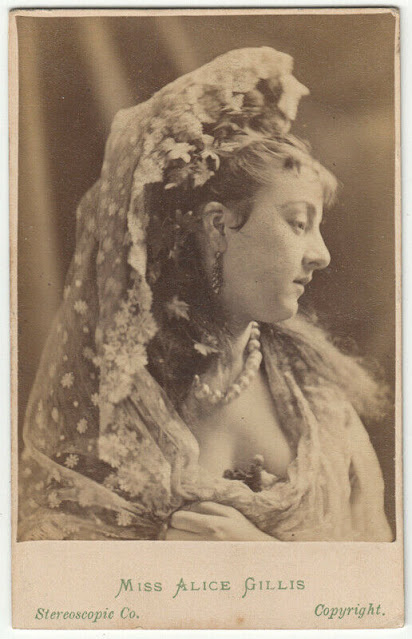 Alice Louisa GILLIS -- and, yes, it was her real name, in spite of all suggestions to the contrary -- was born in Pimlico in the first months of 1854. Her father, Edward Gillis (b Buckingham Palace Rd 26 December 1816), was, like his father before him, a musician in the grenadier guards, of her mother, Elizabeth, I know naught, and Alice was the only daughter in a family of five (soon reduced to four). Father lost an eye at some stage, and ended up a Chelsea pensioner.

Alice took to the music-hall stage as a young teenager. I see her as a serio comic and dancer at the Regent Music Hall in 1868, then in 1870 at Leicester's Midland Music Hall, and by 1871 she had established herself well enough to rise up the bills at such as the Angel Gardens, Norwich the Aldershot Victory Music Hall, and some of London's lesser halls -- the Eastern in Limehouse, the Winchester, the Raglan.

‘[She] has a good voice and a brisk agreeable manner. ‘I want a handsome beau’ she brightly and boldly cried, then informed us that she was ‘Bashful Jenny’ which must be interpreted reversely for she was not shy. Again she came forward, prettily dressed as a stage prince, and invited the dear boys to make a noise’.

In 1872, she made an 'eight months' tour of Belgium and Holland, and returned to London to play at the Marylebone and the Cambridge ('an eminently brisk and forceful damsel') ... then I lose her. No, not terminally. But she disappears from the music-hall chronicle. Why? Because during that 'tour' in the lowlands, she had evidently lost her virtue (if she ever had one) in Rotterdam, and she was now a brisk, kept damsel with an annual allowance of 800 thalers a year.

Nevertheless, she seems to have spent a certain amount of the years that followed in England, apparenly acting as 'Miss Greville', and didn't officially 'retire' from performing until 1879. By which time she was shacked up, on a semi-permanent basis, with a certain Algernon Charles Fitzgerald, in south London, and a confirmed alcoholic. Her 'illness' required the services of a doctor, and the doctor who came was a certain Dr William Cunningham Cass, who was said (by her) soon to have climbed from the side of the lady's bed, into the betwixt of its sheets and ... The reason that we know all this is that, when Alice dumped the good doctor, he vengefully sued Fitzgerald for 97L in 'medical fees' and the press had a couple of field days with the gory details. Miss Fortescue's suit against Lord Garmoyle for breach of promise had a hard job competing in the column-inches stakes.

The jury couldn't decide on the case, but it didn't really matter. Alice ('Her brain is more like that of a child 12 years old than a woman of eight-and-twenty') returned to Rotterdam and died there at the sodden age of 32 (9 January 1887). A few months later, poor, silly Fitzgerald, too, passed away, at one of continually-changing addresses at Ramsgate (29 June 1887). And Dr Cass 'without a blemish to his character', so the judge assured the press, carried on ministering to the ill of Pimlico, doubtless with an increased clientele of maiden ladies. He never married, but lived with his sister until his death 4 March 1919. He left over eleven thousand pounds, so he hadn't really needed that 97L. But Pimlico has no fury like a doctor (or clergyman) scorned.

And of all that, naught remains but this little picture ...

Posted by GEROLSTEIN at 6:00 PM