Cartesians: The basso from Battersea

In forty years in the music and theatre businesses, bass singer George Marler took part in a widely differing array of entertainments.

Marler was born in Battersea, the son of pub-keeper John Fox Marler (d Salisbury Terrace, Walworth, May 1862), sometime of the Royal George, Walworth, and his wife, Esther née Morris. He was indentured to a hatter, and, through his twenties, made his living as a journeyman hatter. He married Eliza Ryan, daughter of a ‘table cover manufacturer’, 16 September 1855, and she began what was to be a considerable family the following year.

However, George Marler was a keen amateur musician. He played the ‘cello, and, having discovered his bass singing voice, joined Henry Leslie’s blossoming London amateur choir.  Leslie sent the young man to Ciro Pinsuti for singing lessons, and promoted him to the spot previously occupied by Chaplin Henry and Shirley Hodson, as a choir soloist in the quartets featured on his programmes. His obituaries have him making up a team with Mrs Fosdyke (sic), Janet Patey and Joseph Maas. This however, seems to be a ‘dream team’; I see him in December 1862 and January and June 1863 teaming with Lucy Fosbroke, Clara West/Janet Whytock and Henry Regaldi. later with Mesdames Gilardoni and West, Alice Stanley and a Mr Hawtrey. In the male ensembles he shared the billing with Messrs Barnby, Walker and S Smith. 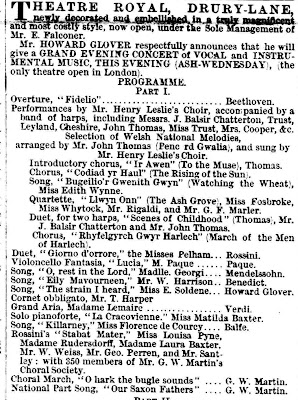 Mr Marler, however, soon moved on. Through the influence of Leslie, he was sent to Alberto Randegger for lessons and, as a result, when the composer mounted his operetta, The Rival Beauties, at Leeds (2 May 1864), George Marler was cast in the part of Tom Deloraine, alongside Emily Spiller, Julia Elton, W H Cummings and George Patey. The piece got a showing at the Crystal Palace later that month (30 May-4 June), giving Marler his first appearance on the London stage. The Rival Beauties was brought out regularly in years to come, and Marler repeated his original role on several occasions. 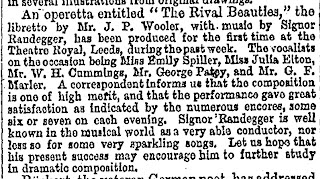 Over the next years, he fulfilled a multicoloured list of engagements: the Apollo Glee Club, the Theatre Royal Drury Lane in a quartet in Cymbeline and as a witch in Macbeth, in concert with Julius Benedict’s Vocal Association in an evening of cantatas, at the Oxford and Canterbury Music Halls in the operatic selections (Il Trovatore, The Ruins of Athens etc), at the Agricultural Hall sharing the bass solos in Elijah and The Messiah with Patey, or at Evans’s Supper Club, in the part-songs and glees sung there. For the whole of the 1871-2 season and into 1873, he featured in the Sunday Concerts for the People at St George’s Hall, where he performed in oratorio (The Creation, Judas Maccabeus, Stabat Mater, Messe Solenelle).

In 1872, Marler joined the English opera company performing at the Crystal Palace, playing in Robin Hood (Little John) and The Lily of Killarney (Mr Corrigan). He would return regularly to that company in the following years, appearing in Un Ballo in maschera (Samuele), Fra Diavolo (Giacomo), Lucrezia Borgia, Lucia di Lammermoor, Il Trovatore (Ferrando) and with a version of the company, at the Gaiety Theatre. He also sang at the Palace’s Saturday concerts, in oratorio.

In 1873 he appeared as Tippoo in the abortive production of The Magic Pearl, at the Alexandra, and then moved on to Covent Garden for Christmas. He played in the forepieces to the pantomime: Pierre in the Rose of the Auvergne and Hendrik Hudson to Charles Rice’s Rip van Winkle. Another operetta, Lisette (Opera Comique 26 April 1873) was not a success. 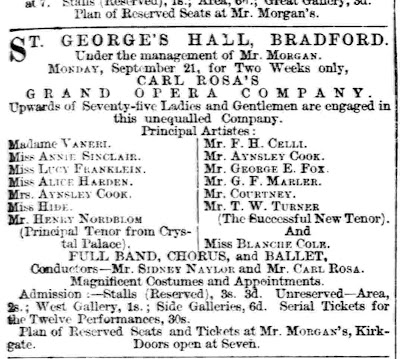 In September 1874, he fulfilled a short post-London season with the Carl Rosa Opera Company (Campomayor in The Crown Diamonds, Samuele, Commendatore in Don Giovanni) before taking up an engagement at the Philharmonic Theatre, playing Larivaudière in La Fille de Madame Angot, Devilshoof in The Bohemian Girl,  and the King of Spain in Maritana.

He sang at more Sunday People’s Concerts, in more opera at the Crystal Palace and at the Alexandra Palace (Bartolo in The Marriage of Figaro, Baron in Lurline, Baron in La Traviata, Alidoro in Cinderella, Lily of Killarney, Crown Diamonds, Lucia di Lammermoor, Maritana, Il Trovatore etc), took part in the 1878 season of English operas at Her Majesty’s Theatre (Mr Corrigan/Danny Mann, Valentine), and, in 1879, turned up at the Crystal Palace, in Conniston’s Entertainment, playing a two-handed musical Hamlet and Ophelia.

And then it was back to Drury Lane, playing a small part and presumably understudying, in a blown-up La Fille de Madame Angot. 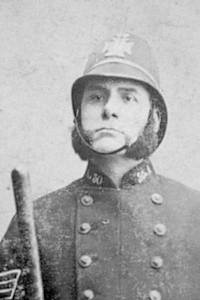 His Fra Diavolo and his Angot had shown up a veritable comic esprit in Marler’s work, so it was not surprising that, in 1880, he was taken on by D’Oyly Carte to play the Sergeant of Police in the touring The Pirates of Penzance. Marler would spend the next four years with the Carte companies, playing Private Willis, Dick Deadeye and – in a brief later return – Sergeant Meryll. 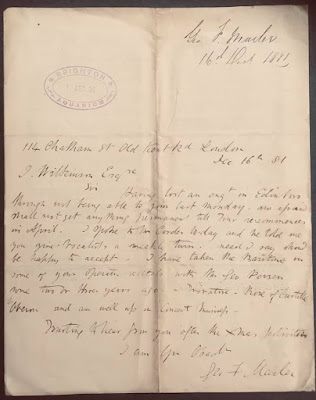 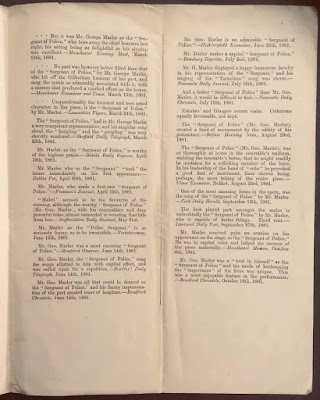 From the Carte management, he moved on to Violet Melnotte to create the role of the landlord, Dufois, in the hit musical Erminie, but he preferred to go out with the long-touring company of the show, rather than continue into London, playing Dufois and later the Marquis. He played Major de la Gonfrière in Captain Thérèse, Capier in The Fifteenth of October and Count Hogginarmo in The Rose in the Ring in 1890-1. 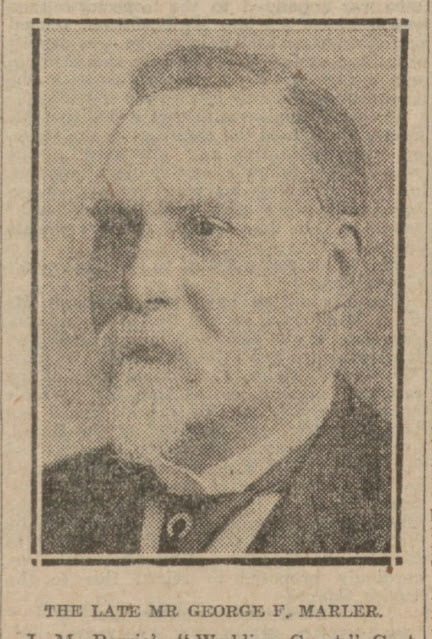 From that time, however, he favoured management and directing over performing. He led out one of Carte companies, and finally, after his wife’s death (24 March 1894), came to rest in Dundee, where he had for some years directed amateur musical productions, as manager of the local Theatre Royal. He remained at that post until shortly before his death, in 1902, at the age of 68.

Posted by GEROLSTEIN at 4:22 PM