Cartesians: B for Burville, Breedon, Beebe ...

.
Alice [Julia] ['Madelina'] BURVILLE (b 24 Nelson St, Mile End Old Town,  Stepney 11 July 1856; d The Convent, East Street, Littlehampton 4 July 1944) was an attractive and talented ingenue soprano who played many leading roles in comic opera on both sides of the Atlantic in the 1870s and 1880s.

Alice was born in Stepney, the pre-marital child of Wood Burville (b Ash, Kent 1831; d London 9 February 1899) and Julia Mitchell ... I've written her up briefly in my Encyclopaedia of the Musical Theatre, so I can simply reproduce my article here, adding the odd expansion of detail:


'The daughter of a London photographer, pretty young Alice Burville took to the stage at a very early age and went on to become a favourite ‘principal girl’ soprano of the 1870s and early 1880s British and American stage. She began her West End career in the tiny rôle of a Maid of Honour in La Branche cassée (1874), and continued through roles in Ten of 'em (Zehn Mädchen un kein Mann) and the 1874 pantomime (Kohinoor in Aladdin) at the Theatre Royal, Drury Lane, and burlesque (Meenie in Young Rip van Winkle 1876 opposite Nellie Farren), to take the leading ingénue rôles in London presentations of Dagobert (1875, Princess Fleur d'amour 'really sweet voice'), Fleur de thé (1875, Fleur de thé), The Duke's Daughter (La Timbale d'argent, 1876, Malvina), La Chanson de Fortunio (1876, Laurette) and Le Petit Duc (1878, la petite Duchesse, opposite Alice May). She also took over as Rosalinde in London's first Die Fledermaus (1877) and as Josephine in the original production of HMS Pinafore and played the title-rôle in a major revival of Geneviève de Brabant.
In 1877 she visted America as a member of Lydia Thompson's troupe playing Polly Hopkins in Robinson Crusoe, Suzel in Oxygen, Joconde in Piff-Paff, Fatima in Bluebeard etc ('one of the most agreeable voices ever heard here in burlesque'), and she subsequently went round the United States with Nat Goodwin’s Froliques (Minnie Clover/Constance in Hobbies, 1880), being adjudged by the local press ‘an excellent specimen of an English burlesque actress, fair and buxom and a capital songstress’. She also appeared on Broadway as Arabella in Billee Taylor (1881) and Lady Angela in Patience (1881-2). She returned home, amongst scandalous rumours of a paid-off marriage to Howell Osborne, the actress-chasing son of a hugely wealthy stockbroker, C J Osborne, where she appeared as Fiametta in the British production of Boccaccio (1882), but this was her last major London rôle, her work thereafter being largely in the provinces where she appeared in the title-rôle of Merry Mignon, composed by her newly acquired (1883) husband, John Crook, and took the lead in the provincial musical The Bachelors (1885). She was last stage-sighted playing in pantomime at the suburban Standard Theatre in 1887 and at Leicester at Christmas 1893 when she played Drogan in Geneviève de Brabant alongside a couple of other veterans of that famous show’s earlier productions.
Prior to her marriage to Crook, and to the stockbroker scandal, Miss Burville was briefly married (4 March 1876) to the actor and singer W H Denny. He divorced her for adultery in 1879-81. 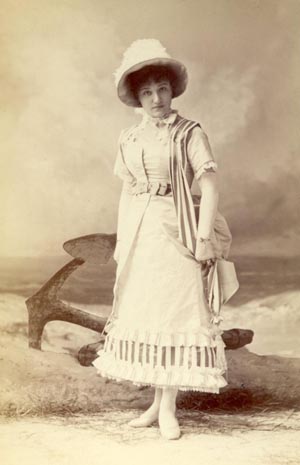 Before her appearance in London in La Branche cassée, Alice had already played in Nemesis in the provinces, to where she returned, between London engagements, in later 1876, with Richard South's Opera Company as Wanda to the Grande-Duchesse of Selina Dolaro and Clairette in La Fille de Madame Angot.
The Thompson trip to America was made along with her younger sister, [Rachel Se]Lina Burville (b Prince's Street, Chelsea 15 June 1858; d Keswick 30 November 1935) who stayed behind when Alice reurned to Britain, but was also seen in London in Geneviève de Brabant and The Prima Donna (1889) .
At Christmas 1882 Alice played Zorilda in Sinbad with Lina at the Theatre Royal, Manchester, in 1883 she was Sir Aintree de Waterloo in Beauty and the Beast at the Prince of Wales, Liverpool where she repeated in 1884, in 1885 the fairy in Robinson Crusoe at Birmingham, in 1887 Polly Perkins in Fee Fi Fo Fum at the Standard Theatre ('excelled in her vocalism'), in 1888 as principal Girl at Edinburgh's Dick Whittington.  In 1892, she went on tour with Augustus Harris's troupe, alongside J L Shine and Kate Sullivan, playing the comic opera The Young Recruit.
After being separated from Alice, Howell Osborne moved his attentions to Fay Templeton. She inherited largely at his death.

Wow! I see that my Encyclopaedia article has been plundered widely on the Internet (chuckle, my rather .. er .. individual phraseology shines out ...) ... where's the fun in barefaced 'borrowing' without credit? That's when it stops being 'borrowing' and becomes um .... ah well, at least that way the facts get correctly transmitted!

Well, Alice being mostly second-hand (MY hand!), I've got a few hours to try those other folk ...

Arnold BREEDON [BREEDEN, George Arnold] (b Newington 1853; d King's Norton 1926) spent less than a decade on the stage, and much of it in one role.
He was born in London, to Birmingham brass-founder Joseph Breeden and his wife Eleanor née Jepson, who spent some years in London before returning to home base in King's Norton. He began his working life as a clerk, but seems to have spent a little time in Italy -- presumably taking singing lessons: for in 1879 he married a young Italian lady named Rosvinda. In 1880 I see him -- now Arnold Breedon -- playing in a tour of the operetta Lover's Knots. The Carte organisation and Teddy Solomon were both noted for their choice of handsome to aristocratic (very) light tenors for the heroes of their shows, and this time they went well and truly to form. The inexperienced Breedon was shoved straight into the title-role of the hit musical Billee Taylor for its New York premiere. He was not a success: 'Mr Dreedon has a weak voice, and his attempts to embellish his singing make it appear less effective than it would otherwise be. He is the only really poor actor in the company ...'. 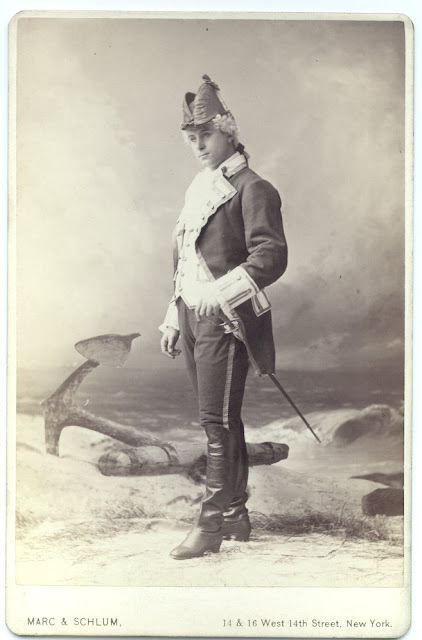 Billee Taylor was a splendid success, but George soon went home. He turned up next in the ephemeral The Wreck of the Pinafore, and then was called on to repeat his Billee Taylor in a series of matinees and the Gaiety. This time his singing was liked, but. his acting judged 'very stiff and amateurish'.  However, Breedon and Billee stuck together for several more seasons, by the end of which he was acclaimed as 'the original' (that had been the disastrous Frederic Rivers) and as perfect in the role.
In between Billees, opposite Lucille Meredith , Annie Poole,, Marion Hood, Rosie St George, Agnes delaPorte ... he toured as Luis in Les Manteaux noirs ('an American tenor ... posseses a most agreeable voice, accompanied by a fine stage presence') and played in the first and fourth attempts to get the comic opera Estrella off the ground.
His final attempt on the musical stage seems to have been in the comic opera Rhoda,a London flop revamped for the provinces by Deane Brand and featurng the producer and his wife, Kate Chard. Thereafter, George, Rosavina and their growing family retired to King's Norton where he taught singing at a local Institute.  He died in 1926, but Rosavina survived to the age of 90, dying in 1950.

Mary BEEBE (b Columbus, Ohio 27 February 1859; d Brookline 8 October 1902) is remembered for one role: Josephine in the Boston Ideal Opera Company's superior production of HMS Pinafore. But, in spite of problems, personal and marital, and something of a scandal, she played a list of other roles with the Ideals, and went on to several years further of leading soprano parts.
She was the daughter (the first, after four sons) of New Yorker James Henry Beebe, the state law librarian of Columbus and his wife Elizabeth née Knapp. She began appearing in Boston concerts about 1877 (Napier Lothian's Sundays, Tremont Temple), and the tale has been oft told of how she was hired at short noitce to play Josephine in Miss Ober's production of Pinafore (14 April 1879). She had to resgin her post at the Clarenden Baptist Church, the management refusing to have anything to do with the wicked stage, triumphed in her theatrical debut, and thenceforth became meat for the gossip columnists who chronicled her every doing or not really doing. 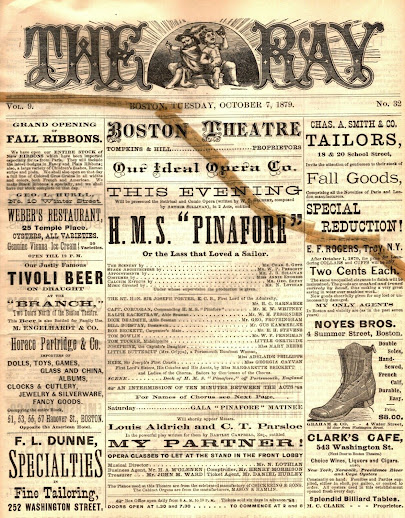 She appeared as Lydia in Fatinitza, as Mabel in The Pirates of Penzance et al, she sang with H C Barnabee's Concert Party, and then announced her retirement for 20 November, prior to her marriage with Mr Richard G Haskell. They were married 11 December, early in the new year Mary moved out, came back, moved out again ... the marriage was clearly doomed. Mary sought solace elsewhere, Haskell divorced her ... and the virtuous Ideal Opera Company (whose other leading soprano was the wife of an influential member of the troupe) ousted her. 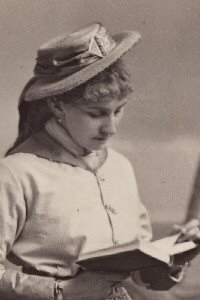 Between 1883-6  I see her appearing in various venues with the Chicago Church Choir troupe (Iolanthe), with the Hess-Acme company (Princess Ida), with Henry Laurent in Le Petit Duc, in Patience at Haverley's, in Baltimore in repertoire (The Merry War, Giroflé-Giroflà, The Bohemian Girl, Fatiniza, The Pirates of Penzance), in John Stetson's Mikado company ... until she remarried (23 June 1886), Mr Ethan Horace Cutler (b Amherst 18 March 1848; d 3 December 1923), left the stage for real this time, and largely vanished from the gossip columns. Well, in 1901-2 she did sue Cutler for divorce, a few months before her death, but it turned out she had a brain tumour ...

That's enough for the Bs. I feel like another letter ... but we're chewing away at this list bit of Who's Whoing ...