.
Lovely autumn day for New Zealand's first day of marginal liberty. So I've been out pulling the odd weed, dead-heading the odd rose (behind locked gates, we don't want to disobey the Baroness!), and lethargically bashing away, between times, at some of the really anynomous Cartesians of whom I expected nothing. So far, 3pm, I've got just about that. Onlt two or three hits. But on my travels, I find the odd curiosity. Such as this 1909 article. 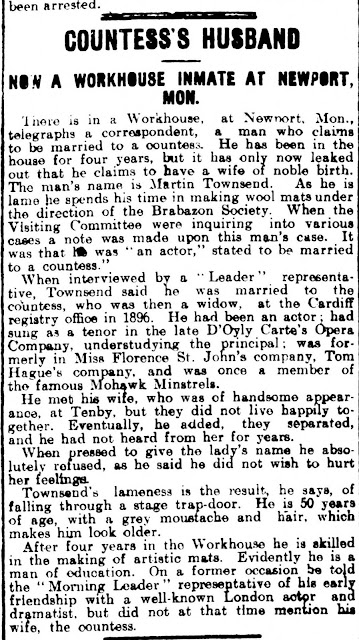 The reporter seems dubious as to the truth of the man's story. And I suspect that most of his readers had a disbelieving giggle, as well. But, apart from the list of credits, I can prove every single word true. So why should those paltry credits be lies?

Martin Edward Townsend was born in Sculcoates, in 1859, the son of a warehouseman, William Townsend and his wife, Mary Ann née ?Dooley. By 1891 he is 'professional operatic' (father is now an 'oyster vendor'). But he soon left the profession and moved to Wales, where he met a lady named Maude Mary Maund, the widow of a local gentleman. Mrs Maund was baby-blue-blooded, as he said ... her maiden name was Arundell... one of the Arundells of Wardour ..

So not very well-heeled aristocrats. Anyway, sometime after 1901 (when they can be seen in Chepstow together) she bolted ... seemingly a serial bolter, she'd done the same to her first husband ... and Martin ended up making mats in the best little workhouse in Wales.

Sadly, none of George Low's pay lists include a Townsend, and I have disposed of all my programmes, but if anyone spots a Mr chorus Townsend on a Cartesian programme of the 80s or early 90s, do tell me. It will be Martin the Mat-Maker. (Blast! Now I'm humming 'Matmaker, matmaker, make me a mat...').

I spent a lot of time on George William COCKBURN (b Newington, c January 1868). Firstly because the 1906 Green Book gives him a birthdate some two years later (but, seemingly, no one notices his death), and secondly because he had a huge career as an actor, reaching over thirty years and nearly three pages of credits. Yes, I winkled them all out, just in case there were any musical ones. And there were.
George was born in Walworth, where his father, George was a hatter. His mother was Louisa Ann née Fussell, and she bore four daghters before giving George sr his namesake.  I see them at 60 Stamford Street in 1871, where George is plainly marked as being three years old. In 1881 he is in Scotland 'aged 12'. He is an 'operatic vocalist'. That means he is on tour with the Carte Juvenile HMS Pinafore company. His digs mates are [James] Edward Pickering who played Sir Joseph and Carte advance agent Vincent Wyld Oxberry.

He seems to have started his almost-adult career in 1895 with Adeline Montagu's touring troupe, and among a plethora of jobs in dramas and melodramas, including a series at the Standard Theatre I spot him playing the Grand Vizier in Aladdin (1887, with electrical tricks), singing the title-song as hero Richard Carlyon in the old-fashioned melodrama True Heart and taking a tour to South America with Edwin Cleary's Comic Opera Troupe (1890, prima donna: Leonora Braham), whilst playing in such as Proof and Theodora at the Princess's and the Olympic. In 1891 he created the role of the Marquis de Beaumont in A Royal Divorce with Murray Carson and 'Grace Hawthorne' as Napoléon and Josephine. A dozen years later, he was still playing A Royal Divorce in the provinces, giving his 'celebrated' performance as Napoléon. But in between times he had been seem in a galaxy of dramas at the Adelphi, the Princess's, the Shaftesbury, the Pavilion , he played Claudius and Banquo in London and Germany with Forbes Robertson and Mrs Patrick Campbell, and he took a turn right back to where he had started when he toured for Carte as Scaphio in Utopia (Ltd). Unfortunately he sprained his ankle, and Mr Stewart had to deputise for a while.
For a number of years he toured for W W Kelly in A Royal Divorce, even brushing London with performances at the Scala Theatre, as late as 1906. That same year he played in The Forty Thieves at the Coronet Theatre ...  he was still not yet forty ... but thereafter I see him only at Hull, in late 1910, playing in a fifth-class melodrama of popguns and what Dame Edna would call 'colour and movement', The King of the Wild West ... His mother, with whom he was still living, died that year ... and George goes beyond my ken. And everyone else's apparently...

I've meant, for a long time, to look into Jose[phine] SHALDERS (b Sydenham 1870; d Cape Town 25 January 1936). It seemed as if it ought to be a real name. Well, it was: sort of. Her mother was born Lucy Steele in 1835. In 1862 she married an elderly, widowed master-builder, Richard Shalders, with whom she had been living for some years, and by whom she had had two children. Two more were to follow before Mr Shalders imploded in 1864, leaving his widow his wealth. On condition that she did not remarry. So, what was a girl to do. Lucy and her four little ones shacked up with one Henry Johson, gent -- younger than Lucy, this time -- and produced three more children, before the 'couple' split up. And the last of these was Jose. Christened Johnson, she now reverted to being Shalders. And, in 1889 began her theatrical career with the Carte companies as a 'daintily coquettish' Phoebe Meryll. I see her in 1892 as the Princess in Aladdin at the Manchester Prince's, in 1893 with Amy Augarde as Aladdin at Glasgow, but in between times she had moved to the Savoy Theatre where she played in The Nautch Girl, Jane Annie, The Vicar of Bray, and The Gondoliers, before going back on the road. In 1894 she was hired for Hendersons' Extravaganza Company, and voyaged to America. And there she met a man. Arthur Ernest Attride. They were married in Chicago 5 September 1894, and divorced in 1898. Jose accused him of adultery and cruelty. He said nonsense she was 'a woman of violent and ungernable temper and drunken habits'. I lean to her version: his subsequent life (major fraud, bankruptcy) was not edifying. 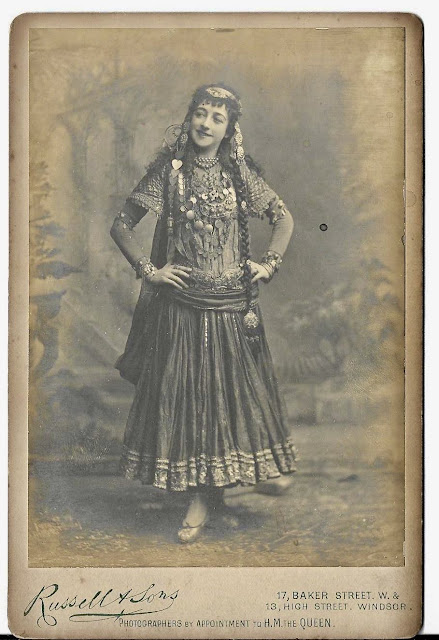 The Extravaganza Co played Aladdin Jr in New York for 48 performances, after which Jose joined a touring A Trip to Chinatown company (1896), and then returned home where she moved into the role of one of the Trois Cousines in Florence St John's La Périchole at the Garrick. But that was it. She tried a serio-dancer act in variety, a male impersonator act, and one more pantomime, Dick Whittington at Stratford East (1899) ... she got rid of the bankrupted husband 'of Thavies Inn, Holborn, merchant'  ... and sailed for South Africa. There, in 1922, she remarried (as did Attride, back in England), and died, as Mrs William Colclough, in 1936.

Having sorted Jose, I thought I would have another go at the lass from whom she took over the role of Banyan in The Nautch Girl, Miss Louise ROWE. Alas, I failed.

The Archive tells us Louise was born in Redruth, but that leaves several possibilities and no clues. So her four years with Carte -- Phoebe Meryll ('a charming voice and a pleasing figure'), Tessa to the Gianetta of Carrie Donald, Banyan and later Chinna Loofah in place of Jessie Bond, Cynthia in The Vicar of Bray -- between 1889 and 1893 remain her only references. 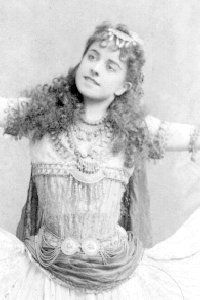 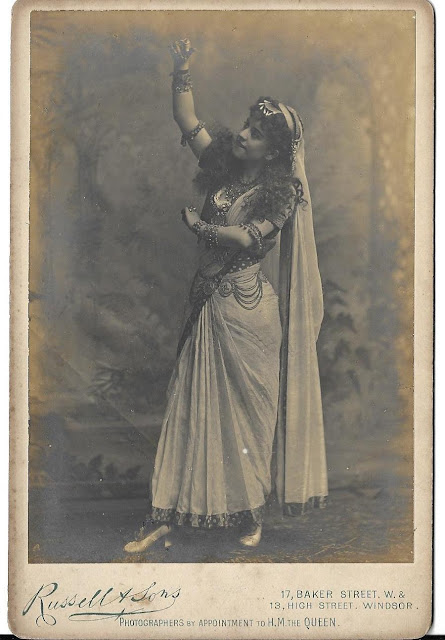 I think an early night tonight. I won't get on to James Thomson Macmillan ... that's a whole day job ... or Peter Flucker ... and I stumbled over Alfred Adams and a whole shipload of Cartesians on their way to America in 1939 (way out of my period! what was I doing there?) which may throw up something of interest to someone 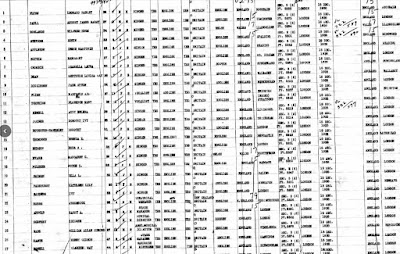 Posted by GEROLSTEIN at 2:39 AM