Today, this fascinating bit of musical-theatre ephemera appeared on e-bay. A few years back, I would have been unlocking my wallet ... I hope someone who cares about the history of light and comic opera will buy and treasure this! 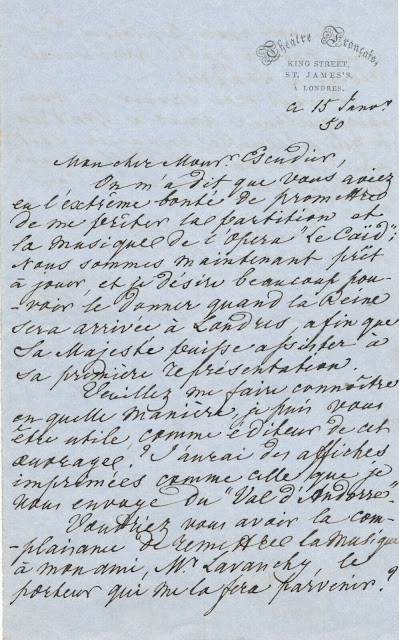 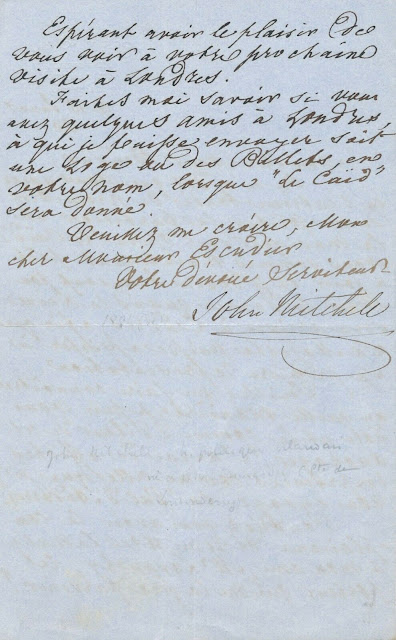 What is it? It is a letter from Mr John Mitchell, the impresario of a number of English seasons of French plays and opéras-comiques, notably at the St James's Theatre, to the publisher Léon Escudier (if it were not his brother, Marie) asking for him to send to London the music of the previous year's Parisian hit, Ambroise Thomas's Le Caïd, which he was to feature in his coming season. 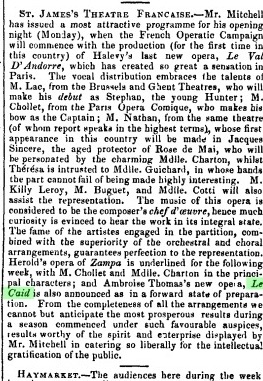 The music was evidently sent promptly. Mitchell's letter is dated 15th January, the first London performance was played 28th January! The cast, of course, being imported from Paris, clearly had learned their roles there in the twelve-month since the piece's production at the Opéra-Comique ... but all the same! The original cast had starred Delphine Ugalde, Sainte-Foy, Hermann-Léon, Henry, Jean-Jacques Boulo and Mlle Decroix; London's line-up featured Anne [Arsène] Charton (1824-1892), from the Opéra-Comique, already a welcome guest in French companies at Drury Lane and the St James's, where she had, the previous year, scored a triumph in Le Domino noir.

The light tenor Lac, formerly of Bordeaux, Brussels and Ghent, and MM Élie Nathan (1822-1884), bass, from the Opera-Comique, Buguet 'of Brussels', back from the previous year, and Châteaufort supported her. The French company played three nights weekly, and it seems that five performances of Le Caïd were given, in their bulging repertoire of older pieces, before they troupe set off for the provinces.

The following season, Le Caïd was given, in an English version, at the Haymarket Theatre, with the young Louisa Pyne as Virginie.

That's the tale of the event. The tale of the writer of the letter is interesting too. Mitchell (b 21 April 1806; d London 11 December 1874) was a genuine Franco-Englishman, with homes (in pre-EU days) on both sides of the Manche. He was involved in theatre, in both countries, from the mid-1830s, first as a ticket-agent then as a producer, and in 1842 took on the St James's Theatre, London. He ran it for a dozen years. If he is remembered today, however, it is largely on account of his step-daughter. He married the widowed Mme Alcain, whose daughter by her first marriage, Hermine, became Mme Jacques Offenbach (13 August 1844). Thus he is spoken of in books on Offenbach, in Barry Duncan's book on the St James's Theatre, and elsewhere, so I don't need to repeat his tale here.
He seems to have been a thoroughly good egg.

He had nice handwriting, too...