.
I am no longer a Collector. Oh, I was, once ... rabidly. When younger. Music, theatre programmes, libretti, photographs, ephemera, recordings ... all the stuff that went into the making of my early multi-volumes books. But then I stopped. And what had been 'Kurt Gänzl's British Musical Theatre Collection' now nestles, courtesy of Dr James Ward, in the Harvard University Theatre Library. Some twenty years later, I wonder if the whole lot is catalogued!

Anyway, all that as a prelude to saying that the urge to acquire doesn't wholly go away. Every so often, in a shop or, these days, on e-bay and its ilk, I spy a little gem. Usually something ancient, from the narrowest part of my area of expertise ... and just about nobody else's! ... and of which, thus, nobody else knows the significance. And, thus, nobody cares much about. Excepting myself. Well, this week it happened. Here is the item. I know. Only I would get shivers down my spine. But this belongs in a museum. Specifically, an Irish museum .. 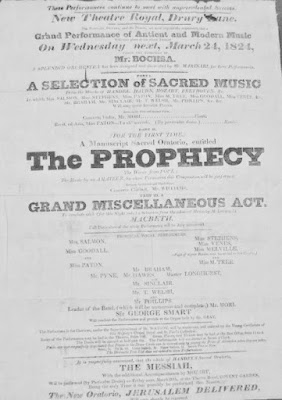 So. What is it? It is a playbill from the Theatre Royal, Drury Lane. Annual Oratorio season of 1824. Under the management of the Chevalier Bochsa. Bochsa, whatever else he might have been, was a fine musician and an enterprising entrepreneur ... just days previously he had given the first British performance of Stadler's Jerusalem Delivered, at Covent Garden's parallel series of sacred concerts, with the flower of British vocalists ... but this was something even more way out. An unpublished, unperformed oratorio by an unknown Irish, amateur composer which -- unbelievably -- used as its source Pope's The Messiah. Why? How?

Well, I have my theory. But it's only a theory. The young composer, arranger, 'author' of The Prophecy ... announced on the bill solely as 'an amateur' ... was a young Dubliner by the name of Joseph Augustine Wade. Esquire. I don't know if he really were an Esquire or not, but that's what he billed himself. In the brief pieces devoted to him in various dictionaries, there seems to be a general consensus that he was born in 1796. He studied at Trinity College, medicine and then music, and took to writing poetry ... and along the way he met Sir John Stevenson, Mus Doc. (One day I must find out why this church singer was knighted; the Mus Doc was an 'honorary' degree). Wade supplied words for some of Stevenson's pieces, including the glee 'The Day-beam is over the sea' (1821), published as 'sung at the London, Bath and Dublin concerts', and ventured his own first songs and arrangements for the local Beefsteak Club, the Dublin concerts et al. He published a version of 'Robin Adair' decorated with embellishments said to be 'for Catalani'. None of this modest local work, however, prefigured an entire oratorio. I suspect the hand and/or influence of the knightly Mus Doc. 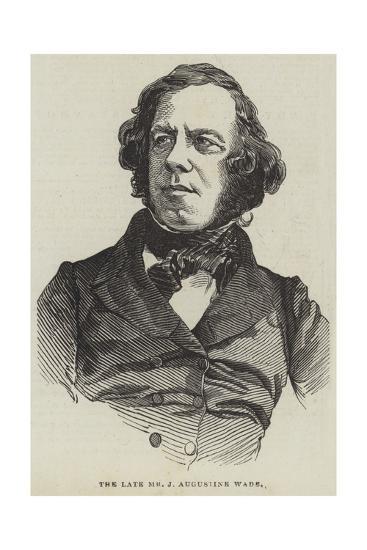 So, come 24 March. The premiere of The Prophecy. Those with long enough memories, might have remembered the oratorio of the same title from the pen of Dr Thomas Busby, Mus Doc, organist of St Mary's, Newington Butts, 'a pupil of Battishill', also built on Pope's eclogue, which had been played at the Haymarket Theatre 29 March 1799 to a touch of amazement at an Englishman's temerity in treading where Handel had trod. It was given again in 1801, but an effort to publish it by subscription seems to have failed. And now it was to have a second, Irish meatmorphosis.

Wade's Prophecy made up only one-third of the programme and, as you can see, the singers for the whole concert were all billed in a lump, with no distinction. Thus, I don't know precisely who sang the work (apart from the Misses Paton and Venes) or for what voices it was written, for such reviews of the evening as I have found, so far, devote only a few and unspecific comments to what I imagine must have been the first Irish oratorio. However, those lines were not dismissive. If anything, they were favourable... 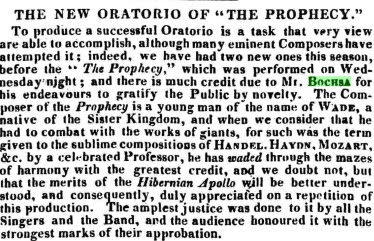 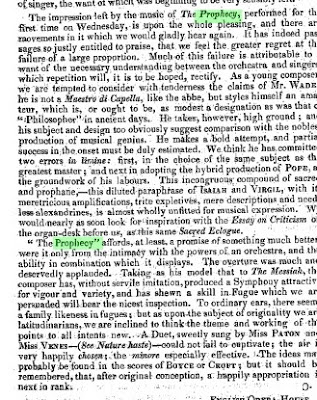 A 'selection from' the oratorio was given on 31 March at another of Bochsa's series, and even a third time on the penultimate night of the series, 7 April, along with an 'act' of Rossini. 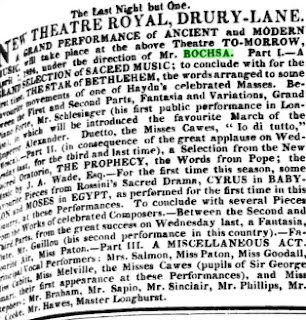 And the summary of the series quoth

Three performances. Apparently of a decreasing part of Wade's opus. It would actually be given once more. The Dublin press reported that because of its 'brilliant success' the oratorio would be again sung in London. But the advertisement for the occasion (10 June 1825) sounds rather grumpy: 'the first and only time in this country as originally composed by ...'  It sounds as if even the first performance had been of a cut-down version. Anyhow George Smart conducted again, Miss Paton and Braham and Phillips were there again, and that seems to have been the last time The Prophecy was ever given. Although, maybe it got a go in Ireland. Like Busby's work, it doesn't seem to have made it to the publishing desk. 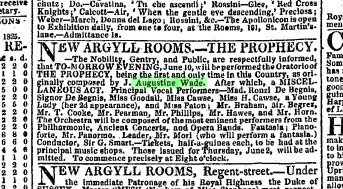 However, we don't need to feel sad for Mr Wade. Although he would never again attempt anything on such a scale, and of such pretension, he was now established in the professional British music world as a Musician and a Composer and a Lyricist, and in the next twenty years songs would simply pour out of his plume on to the printing presses and  music-stands of Britain.

The first real song hit was a number fabricated from a Mozart waltz and set to his words as 'Morning around us is beaming'. The song was taken up by Joanna Goodall, who featured it beside her Handel and Rossini arias at the Argyll Rooms, at the Manchester and Winchester concerts, at York, at Portsmouth, at the Abingdon Grand Music Festival, indeed, to many of the places where she went, over several years.  'Rapturously applauded and encored', 'a very pleasing composition', 'a beautiful serenade'.

He also made inroads into the theatre. Mr Webb introduced his 'Liberty, Gallantry, Whisky and Love' into John Bull and The Wags of Windsor, John Braham interpolated his 'A Woodland Life' into Weber's score for Der Freischütz, while Vestris gave his 'Tis the best of all delights' plugging Vauxhaull Gardens and Sapio rendered his Scottish ballad 'Will you with me, my lov'd Mary', and in 1826 he came out with a complete original score and libretto for a full-scale comic opera. 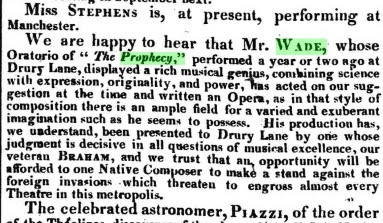 The piece was entitled The Two Houses of Grenada and had a creaky plot with reminiscences of a happy-ending Romeo and Juliet. And Mr Wade was, it seemed, not talented as a dramatist. 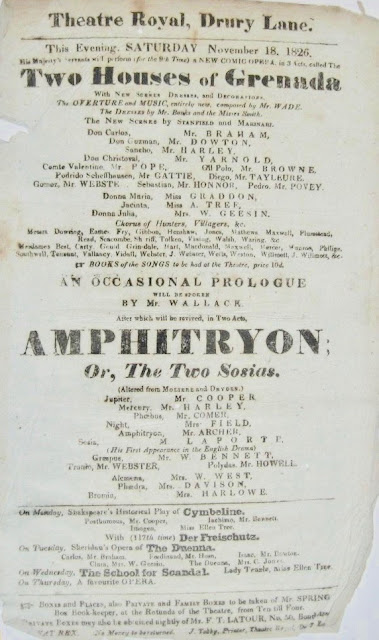 But his songs for the show were something better than his dramaturgy.  Miss Graddon scored with a  ballad 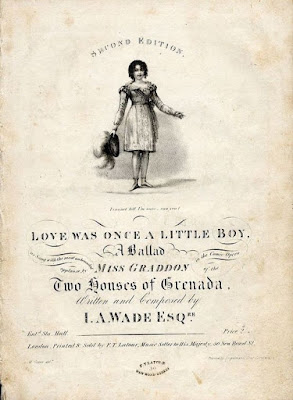 and what seems to be the whole score went into print .. 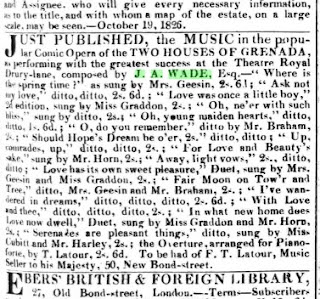 Braham's 'O, do you remember' and, especially, the duet 'I've wandered in dreams' outlasted the play by years. 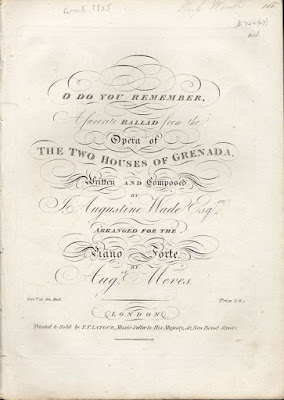 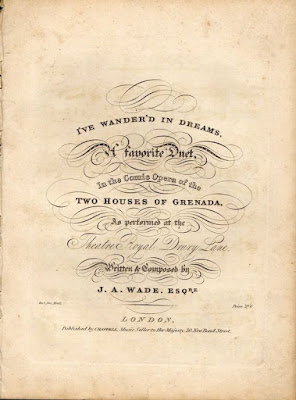 The House of Grenada was played eleven times, and also apparently found the stage in Dublin where it was quickly slimmed into an afterpiece, but its favourite songs lingered on ..  I see Kitty Stephens singing 'Love was once a Little Boy' at Braham's concert ...

Wade contributed songs to the theatre thereafter, including all the music for a well-liked little piece The Pupil of Da Vinci, at Braham's St James's Theatre, but again, he did not persist as a theatre composer. He wrote myriad published songs. but I see them published far more often than I see them performed in the better concerts. 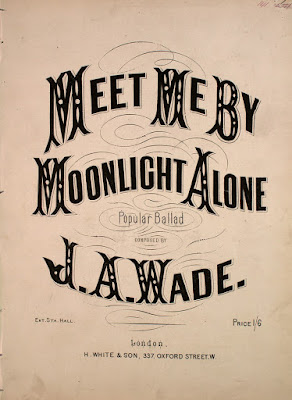 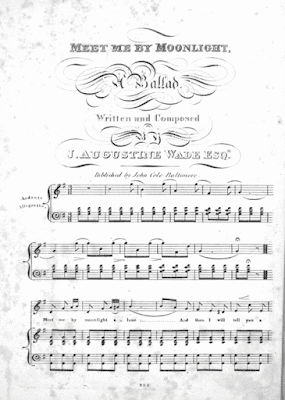 Wade's biggest song success was 'Meet me by moonlight alone'. It has managed to survive two centuries to the Youtube age, in spite of being murtherously treated as a trad thwanging ballad by someone called the Carter Family. Here it is, with its virginity intact, sung as originally written, by Beret Arcaya, accompanied by guitar rather than piano or harp:

I don't know exactly when it was written and published, or where and when first performed. It wasn't, as far as I can see, plugged by such as Miss Goodall, Braham, Phillips or Sapio, although a copy in an Irish library is dubbed 'sung by madame Vestris' and dated 1827. My first sighting is in Leamington in late 1828, sung in a local concert by a Miss Sharpe, then -- already 'the favorite ballad' -- in Edinburgh by the better-known Miss Tunstall, sometime of Vauxhall. No mention of it being a 'new song', but I can't find Vestris either. In London, it was played at the Apollicon, and Mrs Waylett introduced it at the Tottenham Court Theatre, in what appears to have been a version of The Bride of Lammermoor entitled The Field of Forty Footsteps. Then Miss Stephens sang it a Drury Lane concert, Mrs Waylett in The Belle's Stratagem and at her Benefit, at Bath ... Miss Love came out with an answer 'Yes, I'll meet thee by moonlight alone' credited to Mr L Zerbini, it was arranged, rearranged, guitarred by Sola, often treated as 'trad' and with Wade's credit omitted ... 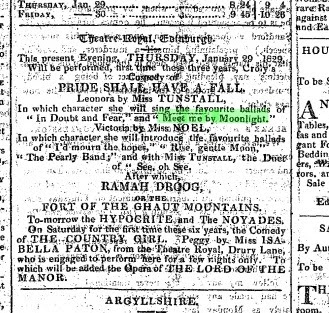 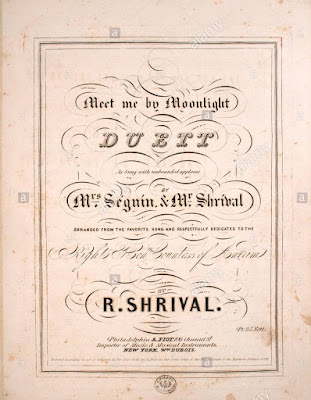 I have a long list of J A Wade songtitles, culled from advertisements and sheet-music, and from library catalogues. I have a very much smaller list of those reported in the press as having been sung in professional concerts, although a number of the music-sheets have 'sung by' with a favourite name attached, in the manner of the time. Mrs Waylett seems to have been a faithful purveyor of Augustine's songs -- I see she stuck one into the play The Yeoman's Daughter in 1834 -- but, it seems,  his market was mostly the drawing room piano 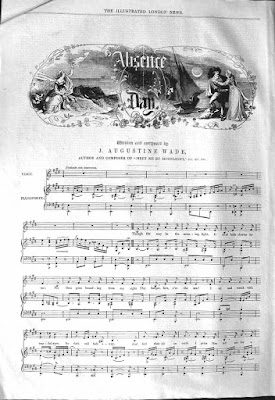 I'm going to leave Mr Wade there. There's plenty more on him and his work to be found if anyone wants to look. I'll just leave him, here, with the two-page (yes, TWO PAGE) obituary printed on his death, before the age of fifty, in The Musical World. It is far from impeccable -- for example, The Prophecy is forgotten and misdated -- but it is the most substantial piece on Wade I have seen. 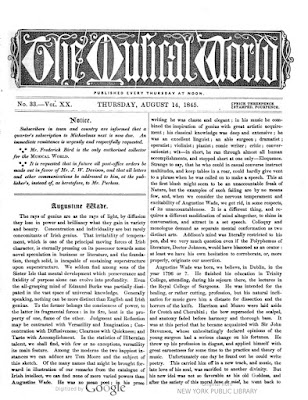 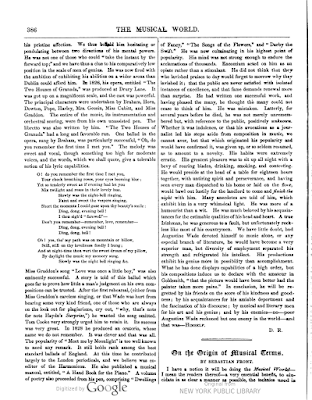 Posted by GEROLSTEIN at 9:07 PM