What's Hot and What's Not in Wight

.
It is a fortnight since I arrived in Wight, and you will notice that the bloggings have not been flowing as freely as in previous years.
The reason? I have come here for a rest of sorts. A quiet life – after the colourful days of Berlin and Jersey -- with simple strolls and drives, when the weather permits, a few social outings only, and a lot of time lounging peacefully in my delightful suite, working unperturbably away at my multi-volumed Encyclopaedia of Victorian Vocalists.
But, of course, that isn’t to say that I haven’t been out and about a bit.
With Bohemia blossoming in my memory, I ventured forth in the company of my friend Debby to try the local one-Michelin-star restaurant, the Hambrough Hotel. My reaction has a page to itself (above). 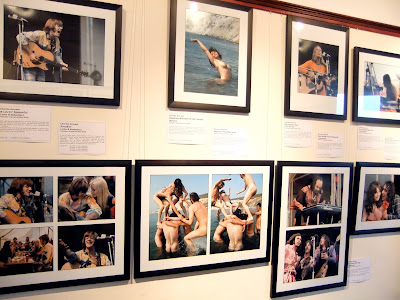 The next night, Debby and I went out for a much more enjoyable evening: the vernissage of an exhibition of photos of the famous 1970s Isle of Wight pop festival taken by veteran snapper, Charles Everest. The exhibition was being staged at Dimbola, Freshwater, once the home of famed Victorian photographer Julia Margaret Cameron, and, alongside the room of Everest’s memorable coloured photos of The Event (even operatic I recognised Baez, Joni Mitchell and Miles Davis, amongst the too-many microphone swallowers, although I have no idea who the naked frolickers in the sea were), were a whole series of splendid exhibitions, ranging from the permanent collection of the lady’s own work, to some magnificent ancient and modern pictures by a local father and son. Father’s self-portrait was particularly splendid. 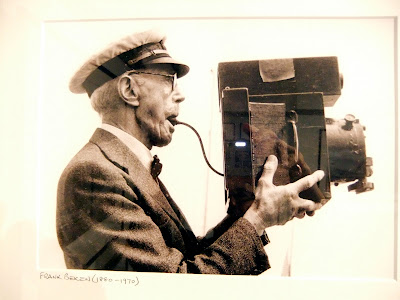 I also liked his snap of Queen Victorias’ guards, after their work at Osborne, heading back to Cowes port 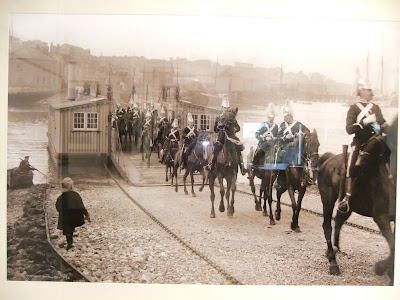 We sipped white cask wine, nibbled a first-class buffet, chatted photography (I was ashamed of my little Fugi digital .. everyone was sporting lenses half a metre long, and vast flash pans! ) et al, and enjoyed the pictures and the people until dusk threatened and it was time to go home.
Actually, the next day that the sun came out, I went back. It’s sometimes a little hard to see things properly at a vernissage packed with people .. also, I decided I owed them at least a cuppa in their café in return for their hospitality. 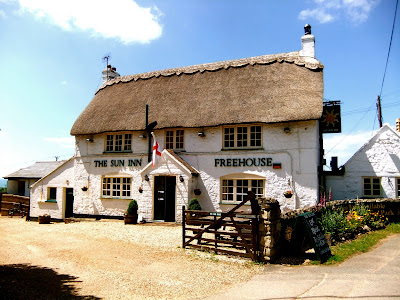 So I set out via Brightstone and .. Hulverstone! The nice-looking pub my pal Jasper had recommended to me. So I pulled up. It is a pretty spot, a nice old pub a bit awkwardly arranged inside and now unpicturesquely added to, but with a grand green lawn and tables from where one can look out to the sea. The ginger beer shandy, served to me by a suicidal-looking and overworked barman, was fair (cheap ginger beer just isn’t an option) but I shrunk from the sandwich idea when I saw one go past. This, like Brightstone, must be a ‘family pub’. Door-stop slices of bread, drenchings of lettuce and I’m sure I saw potato crisps.

So I finished my shandy slowly in the sun and then set off for Dimbola. There I repeated my viewing of the photos, and had a very nice, slim,cheese and pickle sandwich with no lettuce and a really good ginger beer, sitting sunnily in the forecourt of a beautifully restored Victorian home. Decidedly my scene… 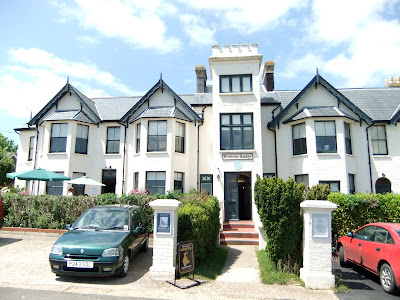 And then, down the Military Road, suffering sadly from the winter snows and erosions, back to my quiet green nook up on the downs, to my comfy chair and the history of Mrs Deborah Knyvett, Victorian Vocalist… 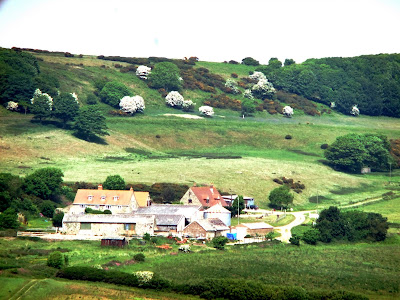