A double-headed Bonzer Day (part one)

.
I remember forty years ago and more visiting Motukarara racetrack and thinking it was one the most agreeable racing venues at which to spend a happy and sunny day out. I still think that. I also often think that I enjoy trials programmes more than actual raceday… and of course when our horses are running, and running well that just puts the candy on the cake.
Today, there was no problem about the sun. It was searing down at a round 30 degrees. And there were no problems with the horses!
Elena ran first, in a splendid thirteen one-win-horse field. How nice to see real ‘rehearsal races’ at the workouts instead of two or three beasts doing a glorified bit of home-training. John and Gavin being on duty elsewhere, Murray again got into the cart behind Elena, and she was in for a little bit of a surprise! There is no better driver in New Zealand than Murray for ‘gentling’ a horse into doing what he wants. With Elena, that’s not always so easy as she has a very strong mind of her own, and I have a bundle of scrapes and cuts and bruises to prove it.
So, against Elena’s ‘rules’ (race on the outside to give her ‘space’), Murray eased her to the inside, surrounded by horses, and she didn’t freak! Since we intend to race her Thursday, she was there for a stiff but not gutbusting cruise around, and that’s what she got. But with a finish. Murray pulled her from the back, three wide round the turn, and let her run home.. and run she did. There would have been five or six horses lined up across the track in the ‘photo for second’ and she was one of them. If Murray had turned the whip she would have been second. Very pleasing.
Photo. 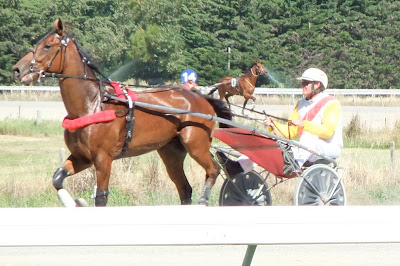 No, not Elena this time, we have rather a lot of those. Yes, that’s Murray, but this is Fritzl. The other little boy, with Seppl, in the prize-winning old baby picture I posted here a few weeks back. Fritzl (The Soldier Fritz) started his career with a boom and a whistle, running fourth in the New Zealand Trotting Stakes for babies last season, but baby days are over and now its time for him to tackle grown-up racehorses. Today was his first tackle and I was a bit stunned the see him drawn in a heat with Glenbogle, the winner of sixteen races and a Grand Circuit champion, making a return to racing after a long injury. Glenbogle was handicapped to 150 metres behind, but when they lined up .. what! .. someone had forgotten to bring the 150m tape, so Glenbogle started right alongside our wee boy. Rather like a junior athlete alongside an Olympic medallist! Like me, the day I ran in an 800 metres heat against Peter Snell (led briefly, faded, last). And a standing start, too …
They all went away safely, under the whitening sun, Murray easing Fritzl slowly but surely into third place, but out of the straight on lap one, he pulled out and went to the front, and there he stayed, gradually increasing the pace and looking adorably adept. 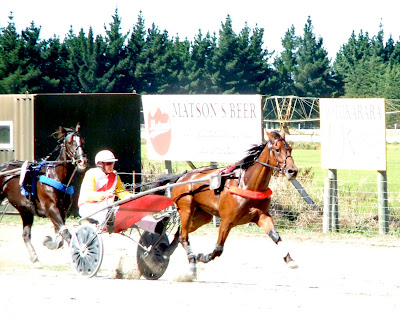 Into the straight, and still ahead, with the others massed behind him .. well, fairystories have their limits. Glenbogle, which had doddled relaxedly round in last place decided actually to run the last couple of hundred metres and he shot past everyone else with ease. But I have this picture showing baby Fritzl – look at the difference between their physiques! -- running a genuine second behind a champion. The official result actually says he finished third, but here’s the photo (a few strides before the line admittedly). ‘Official results’ at workouts are notoriously approximate, and for me our wee boy was second. 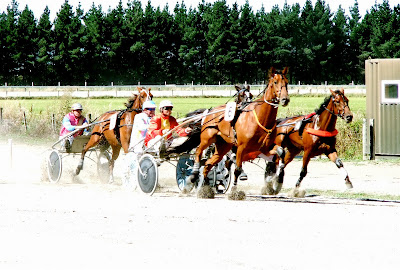 So now it’s the races. Maybe Fritzl will have his first rising adult start on the same bill as Elena on Thursday .. thank goodness I decided to spend the month of March in New Zealand. And summer has come, too, just days off the opening of autumn..
Posted by GEROLSTEIN at 11:44 AM